On The Band Perry’s “Comeback Kid” 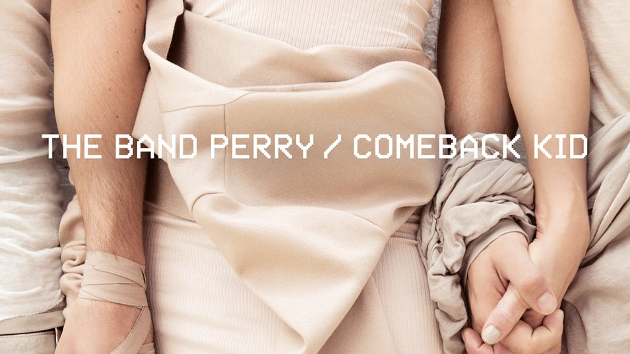 I just find it a bit hard to conjure up any sympathy for The Band Perry at this point, especially if they’re the ones asking for it. So your single flopped, and then your label dropped you. You’ve still seen more success and wealth via music than what 99% of musicians could ever dream of. And now you want to play the victim, like it was someone else’s fault for the state you’re in, which is now beyond being a laughing stock, and is more just an oddity of the music edifice, drawing curiosity for what their next move will be, and their new song “Comeback Kid” and the marketing behind it being just the latest specimen to behold and attempt to decipher. We’ve gone from Dollar General yellow, to Maybelline foundation tan.

We all knew when The Band Perry released their pop song “Live Forever” and declared themselves “pop tarts” (that’s a direct quote), they’d immediately made an achingly-predictable mistake. A successful band in the country space decided they wanted to go swim with the big fishes of pop and got gobbled up. But don’t go bellyaching about the results and the commentary that followed as if it’s someone else’s fault. If The Band Perry’s career was murdered, it was by their own hands, and their own decisions—not the media or label management that happened to pen the post-mortems or rolling commentary of the results.

After getting dropped from Big Machine, The Band Perry signed a pop deal with Interscope, and a country deal with Universal Music Group Nashville. Confused? So apparently is The Band Perry in what direction they want to go. Still. Do they want to wipe the slate clean with the whole pop experiment and return to their roots as a 3-piece string band, or do they want to triple down on the pop thing, if for no other reason than to show up their critics as being wrong about the band’s pop prospects and resolve the whole time?

“Comeback Kid” tries to be both country and pop, while accomplishing neither, and stringing out this strange narrative of The Band Perry to yet another chapter. Part of the problem with The Band Perry has always been their level of self-awareness—the brothers’ hairstyles being just one example; another being how Kimberly Perry’s ambition has always outpaced her talent. She’s not terrible by any stretch, but even in this new song there’s still more breath than tone on the vocal track, which is emphasized by the production and arrangement, not hidden by it as it should be. And yay, they used some string instrumentation on this song. But is anyone seriously considering this country? Is this going to be pushed to country or pop radio? I’m asking because I really don’t know.

Country? Okay, then it will probably fail. But like with any single these days, its success has more to do with how committed a label is to shoving it down radio’s throat as opposed to the relative quality or resonance of the track. So who knows? This whole anti-bullying thing is hot right now. But again, this isn’t the case of big meanies getting in The Band Perry’s way; this is a case where they can’t get out of their own.

The problem with “Comeback Kid” is that it assumes that everyone is aware of just how hard the last year or so has been for the sibling trio, but the average fan doesn’t pay enough attention to label politics or behind-the-scenes signings to know or care. They’re not giving rapt attention to the negativity in a band’s Facebook comments section, or the commentary of stupid little music blogs. They just wait for the next song to come on the radio and hum to it as they commute to and from work.

Beyond all of the behind-the-scenes drama and the failing of one single, The Band Perry has been getting along just fine, if not great. In fact their team probably deserves resounding applause for being able to keep the band in the public spotlight even as they’ve been vacant from radio. They performed on the Miss Universe pageant. They somehow got “Live Forever” to be named the U.S. Olympic Team’s official song. They made numerous other television appearances, including at the pregame for the college football playoffs, and recently on The Family Feud.

The Band Perry is not a lost cause. Even “Live Forever” didn’t do nearly as bad as many other recently-failed singles. At least it cracked the Top 30. Chase Rice would kill for that at the moment.

So when they announce “The Comeback Kid” as some answer to all their detractors and recent failures, most mainstream listeners are not privy to know what they’re having to “comeback” from. The Band Perry’s been paying too much attention to their own press and critics. They made a big display of erasing all of the posts on their social media pages right before releasing this song, but the band has already eroded a lot of the loyalty from their fan base by deleting negative fan comments about “Live Forever” and other decisions from their Facebook page.

Of course folks are going to chirp. They bought into The Band Perry as a country act, and then the band turned coats. But you didn’t see Taylor Swift try to suppress dissent when she made a similar move. When Swift released her anti-bully song “Mean,” the entire world knew what it was about because it was based off of her colossal, high-profile failing at The Grammy Awards. Most fans aren’t invested enough in The Band Perry to care what label they’re signed to. If anything, this song is shining a spotlight on The Band Perry’s drama that many didn’t know about until now.

As a song, “Comeback Kid” is a bit disjointed and busy, but not entirely terrible. Hey, give them some credit for working the acoustic strings in there, and though the self-affirming, anti-bully “gee I’ll show you” songs are a dime a dozen these days, the message is certainly better that the message of many mainstream country songs, if they even have a message at all. And despite the marketing preceding the song wanting to cast it as an answer to critics, the writing works in enough parallels with a broken heart or failed relationship to allow it to mean something to the common listener beyond the commentary on The Band Perry itself.

But some of the lines make you cringe like, “I bet they’ve never had a broken heart.” What is it about these type of songs that make the writers decide to make wild-eyed assumptions about these supposed critics and bullies? The reason that fans went to The Band Perry’s Facebook page to complain about “Live Forever,” or a site like Saving Country Music offered rolling commentary on the band’s missteps, is not because we hate them. The Band Perry’s fans were materially invested in their music, and they wanted to express their opinions about being let down. They remembered songs like “If I Die Young” and “Better Dig Two,” knew where the band’s strength was, and wanted more of that.

This whole move to pop got The Band Perry caught up in their own head. They don’t need to answer their critics in song and marketing scheme. They just need to go out there and do what they do best, which is all critics and fans were clamoring for in the first place. Put out another Brandy Clark-penned song. That will shut detractors up nice and quick, even more so then the arbitrary level of success of some radio single you release.

“Comeback Kid” tries to get back to the heart of what The Band Perry does, but it only does it partially. Yet hey, maybe it’s a step in the right direction. The Band Perry can’t complain if country music doesn’t welcome them back with open arms after they abandoned it so blissfully. But the whiners are hypocrites if The Band Perry does an about face and they’re still bitching in full throat.

I want to hear more of what The Band Perry has to offer after their reboot before making any bold proclamations. What will the album sound like, and how will “Comeback Kid” fit into it? And where will The Band Perry’s crazy ride take them next?

We’ll just have to see.