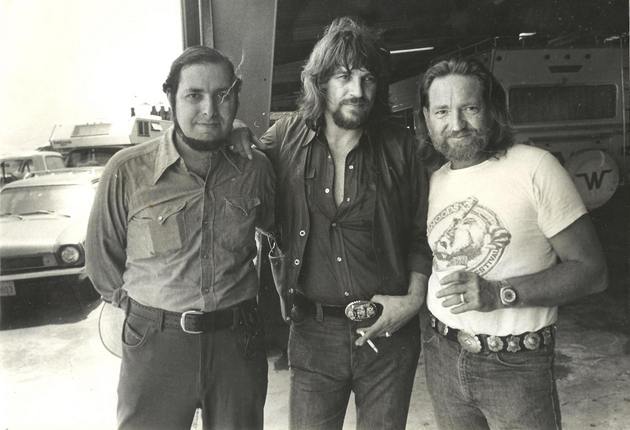 Neil Reshen, Waylon Jennings, and Willie Nelson in a previously-unpublished photo supplied by the Reshen family.

“There was a time when Neil fed me and Willie, and if it hadn’t been for him, I don’t know what we would have done. He helped us immeasurably. He got things for us that no country singer had ever gotten before. If we were going to become Outlaws, though we didn’t know that yet, we needed an Outlaw Lawyer, as Willie called him.

“Neil was perfect for the part. He was like a mad dog on a leash. When he got his teeth into something, he never let go.”

The lawyer who was at the very center of revolutionizing country music in the mid 70’s as part of the Outlaw movement with Willie Nelson and Waylon Jennings, has passed away. Neil C. Reshen, the man who negotiated Willie Nelson out of his RCA contract, and also helped negotiate the creative freedom for Waylon Jennings within RCA, passed away on Sunday, December 6th after a long battle with Altzeimer’s Disease. Neil was also the manager for musicians as far ranging as Miles Davis, Frank Zappa, David Allan Coe, and The Velvet Underground throughout his legendary and influential career. He was 75-years-old.

Neil Reshen’s impact on country music was enormous. Below is an obituary for Neil Reshen supplied to Saving Country by Reshen’s family.

Neil graduated from City College of New York and was a pioneer in the business management field of the music industry. Neil was the management backbone of the “Outlaw Country” movement which developed in the 1970s. He forced record companies to give Willie Nelson and Waylon Jennings 100% artistic control over their music, allowing for such albums as Stardust (by Nelson) and I’ve Always Been Crazy (by Jennings) to be created. Over his career he also managed many musicians such as Miles Davis, Frank Zappa, The Mothers of Invention, Alice Cooper, Buddy Miles, David Allan Coe, Jessi Colter, Linda Ronstadt and The Stone Ponys, The Cowsills, Captain Beefheart, Bernard Purdie, Sam the Sham and the Pharaohs, Tim Buckley and the Velvet Underground. Neil also managed artists and authors such as Peter Max, Andy Warhol, Olivia DeBernadinis, Roger Kahn, and Peter Golenbock and even the famous Creem Magazine and founder Barry Kramer.

In his later career he founded Benay Enterprises and managed many corporations and individuals with his partner and daughter, Dawn Reshen-Doty, who is now President of Benay.

Neil Reshen passed away Saturday December 6 after a long battle with Alzheimer’s disease. He is survived by his daughters Dawn Reshen-Doty of Danbury, CT and Amber Bezahler of Los Angeles, CA, Grandson Justin Slaughter Doty of Danbury, CT, Godson Olufemi Adedeji and ex-wife Barrie Adedeji, both of New York. He also leaves behind two brothers, Bruce Reshen of Fairfield, CT and Mark Reshen, of Hollywood, FL. He was predeceased by ex-wife Patricia Reshen.

Neil Reshen died once before, in 1959, when his parents sat Shiva over his marriage to first wife Barrie. Together they defied cultural norms and entered into a marriage that broke cultural and racial barriers. Neil was many times born again, living through two open-heart surgeries, colon cancer and many other ailments. The fuel for these many lives was friends, family, his children, and numerous German Shepherds.

As Neil was a great lover of dogs always having at least three German shepherds in house at a time donations may be made in his name to the Humane Society. A memorial service to celebrate his life will be held on January 7th, 2015 at the Plaza Jewish Community Chapel, 603 Amsterdam Avenue, NYC at 3 PM.

Out of all of Neil’s accomplishments, his negotiation with RCA and Chet Atkins on behalf of Waylon Jennings might be his most legendary. As Waylon Jennings recalled in his autobiography:

It was down to a $25,000 sum, and they (RCA) were not going to give it to me. He (Neil) wanted it. We were setting there, not a word spoken, and the silence got unbearable. After a while I couldn’t take it anymore. “Chet,” I said, reaching over to a bowl on his desk, “where’d you get these peanuts?”

You could hear a clock tick in the room. It got even quieter. Minutes passed. I rose up, never said a word, walked out. I went to the bathroom to take a leak. When I came back, Neil greeted me in the hall. “You’re a ******* genius,” he said.

Though Neil Reshen might not be a name everyone recognizes, you can make an honest case that without him, the “Outlaw” movement in country music never happens, and neither do many of the iconic albums, songs, and careers of that era.