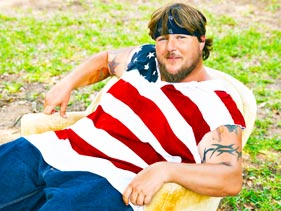 So much for the lovable, huggable character that is portrayed on CMT’s flagship reality show Party Down South. Saving Country music is able to report that the large, Louise, Mississippi native famous for getting naked at a moment’s notice on the show is currently incarcerated in the Humphreys County, Mississippi jail for back owed child support to the tune of $14,000, which could result in a felony charge. Murray was taken into custody early Wednesday, January 7th, and as of Thursday afternoon, still remained incarcerated. When Saving Country Music called the Humphreys County Jail in Belzoni, Mississippi to confirm the arrest and incarceration was indeed the Josh Murray from the show, a representative said, “Yep, it’s him.”

This is the second instance of legal trouble for the reality show star in recent months. Known for drinking excessively on the show, Murray was arrested in Rankin County, Mississippi on November 15th, and charged with DUI and driving with a suspended license. Murray had his license suspended from previous DUI charges. Those charges could have his license suspended for two years.

The arrests and legal issues will not affect Josh Murray’s appearance on the upcoming season of Party Down South because the episodes have already been taped. We know Josh Murray has been making money off the show after the cast all signed lucrative deals after holding out before the second season. Apparently that money never made it to Murray’s offspring.

Then in early August, Ryan “Daddy” Richards, was accused of rape by a woman who says she entered the Party Down South house, was handed an open beer, and woke up later naked in a bed with a camera in her face. The woman went to the hospital the next day, and according to medical professionals, showed signs of sexual assault. An investigation by local police that included interviewing cast and crew and reviewing footage, did not result in any charges being filed. A day later, one of the cast members, Taylor “Lil Bit” Wright, permanently quit the show amidst what she characterized as safety concerns.