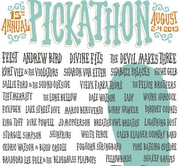 The 2013 Pickathon Festival in Happy Valley, Oregon just outside of Portland has announced their 2013 lineup, and it is a doozy. The roots festival that specializes in breaking down barriers between styles, tastes, and scenes, as well as being one of the most environmentally-friendly festivals in the entire world, outdoes themselves for their 15th season by releasing their most stellar lineup yet.

“We started as something of a picnic party,” Pickathon founder Zale Schoenborn tells Spin. “That was 1999 and we had maybe 90 people out, just a little nugget of a thing that has grown slowly over the years to become the semi-behemoth that we are now.”