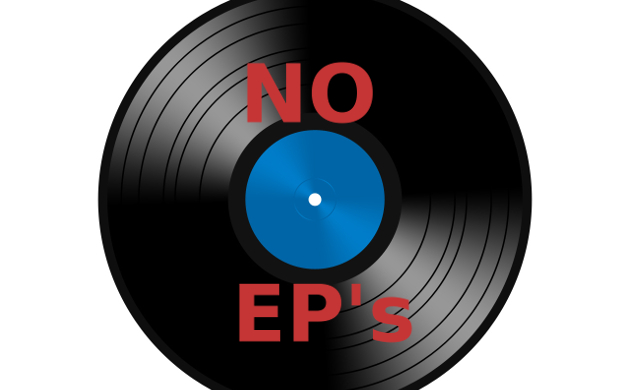 The only greater disservice an artist or a label can do to the music they’ve worked so hard on and put so much love into than releasing it on an EP, is to release it on a four-song EP. You want to bury music and relegate it to the also-ran of your discography and have Wikipedia page editors and everyday fans give you quizzical looks? Release an EP randomly because for some ill-begotten reason you believe it’s the best way to present your music to independent roots fans despite the incredible, time-tested, certifiable and undisputed evidence that it’s about the worst thing you can do.

Go ahead and tell yourself that the album concept is irrelevant and outmoded and that it’s all about singles and streams on Spotify now so it doesn’t really matter how you release music. But we’re not talking about the latest Ke$ha single or some Sam Hunt abomination. I don’t give a shit what’s going on in the mainstream or what you just read in Spin Magazine about how the traditional LP is dead. In independent country and Americana, and in a lot of independent music, the album concept is still King. And from the vantage of someone who unhealthily pours over stats and obsesses over trends, I can say with confidence that the short form EP is a bad move nearly every time it is played.

Without the benefit of radio or the biggest Spotify playlists, independent artists must rely on tools such as the traditional album review and the artist interview—where the focus is on the narrative behind an artist’s music—as well as all of those annoying end-of-year lists, to get their name out into the greater consciousness. There is just not enough meat on the bones of a three or four-song EP to allow any sort of narrative to develop. And in a crowded musical marketplace, there are just too many stories, and too much music to pay attention to for half efforts or half measures to take hold. That is why fair or not, EP’s are systemically relegated to the also-ran of music.

Furthermore, releasing music via the short-form EP takes an artist and their project out of contention for industry Awards such as the Grammys, and news-making chart performances via Billboard and other mainstream institutions that are some of the most lucrative avenues for independent artists to find mainstream-level recognition and have national and international impact. There is no scenario we’re a three or four-song EP can substantially benefit an independent artist. Perhaps as a mainstream play to create buzz for a newer artist, the EP is a possibility. But even this theory is strained at best when put into practice music wilds.

Even worse, by releasing a short EP, an artist expends dry powder with journalists, publicists, and the public alike for attention in the crowded marketplace that could otherwise be used to promote a full-length project in the future. Releasing and EP, including, if not especially, as the precursor to a new LP—and most certainly if those EP songs will be included on the new LP—only puts you at a disadvantage to getting your music in front of people.

Take for example this new Margo price four-song EP called Weakness. Roots music media and the public is tirelessly looking for a woman artist to place beside Sturgill Simpson, Jason Isbell, and Chris Stapleton on the Mount Rushmore of the current country music insurgency. Margo Price in many ways could be perfect for that role. She has the critical acclaim, and she has the grassoots support. But what she doesn’t have is a commercial victory that could prove resonance beyond the quaint independent music community.

No, sales are not always a barometer of quality. In fact the opposite is usually the case. But it is chart performances that have proven over the last few years that if given a chance, independent music can thrive or even surpass mainstream music as a commercial enterprise, allowing more support to flow to independent artists via the industry.

The sophomore album from Margo Price was supposed to be the vehicle for her big breakout—her Metamodern moment if you will. Instead the chatter surrounding Margo Price’s new music is marginal at best, while her album sales are insignificant. Her debut Midwest Farmer’s Daughter debuted at #10 on Billboard’s Country Albums chart. This caused even more attention to flow to her music, even though the physical sales were only 4,000. Since then Midwest Farmer’s Daughter has sold over 50,000 units. Where is the Weakness EP? It didn’t even register in the Top 50 of Billboard’s Country Albums chart.

Perhaps when Margo does release her full-length sophomore album, this EP misstep will be looked upon as marginal or insignificant. Margo Price fans and those rooting for independent music can only hope this is the case. But why run the risk? Are fans bellyaching on Twitter that it’s been too long since new music? Are you are worried you won’t be able to write enough new material for a full-length for a while and you might lose momentum? Fuck that, you are Margo Price. Don’t take the cake out of the oven until the toothpick comes out clean. Sometimes the best thing an artist can do with their music is bless it with their patience. No step is better than a misstep in the morass of too much music at the fingertips of consumers, which is where we stand in music today. There’s too many opportunities for fans to become fickle and move on from an artist to the next hot thing.

There are opportunities when the EP concept isn’t just called for, but is just about perfect for releasing new music. In fact just in 2017 we’ve seen numerous examples of where this is the case. Lindi Ortega’s EP Til’ The Goin Gets Gone about her exit from Nashville is an excellent example of where a full-length album would have been too much time spent on a dedicated subject. Jamie Wyatt’s Felony Blues is a good example of when you have seven great songs, don’t test fate by trying to fluff it out to 10 because of some arbitrary measure of how long an album should be. But these are longer form EP’s that still allow a narrative to develop behind the music and the artist.

Lydia Loveless put out a five-song Boy Crazy EP a couple of years ago that really worked because of the cohesiveness of the material, and how it compartmentalized material that wouldn’t fit on a regular album from her. At times the EP can be very effective, but those times makeup maybe 5% – 10% of releases, and usually when there is a specific concept behind them, and either an artist is still early in their career, or their established enough to take the risk. Still, they tend to be commercial flops. The Brother Brothers’ 2017 EP Tugboats might be one of the best releases of the year. But good luck getting folks to pay attention to it, because it’s an EP.

Parker McCollum just released a four-song EP called Probably Wrong: Session One that is suffering a similar fate. In the case of Parker, it appears he’s going to release a second EP and eventually release a full-length with all of the music together. Interesting concept, but you’re tasking the public and the media to pay attention to you three times instead of once, when there are so many other artists out there vying for attention as well. With so much music to talk about and listen to, so many albums being released every week, all the music at our fingertips thanks to streaming services, there’s just not enough time to pay attention to an artist three times instead of once in a calendar year.

It’s pretty astounding how often you see the EP concept misused in independent music, and consistently to subpar results. Often the EP is where an artist’s career begins and ends, because it’s just so much harder to get the press and the public to pay attention to them, for a host of reasons that are ingrained into listening habits of independent country and roots fans, fair or not.

It’s no offense to these artists or their music. In the case of Margo Price, Parker McCollum, and The Brother Brothers, these EP’s include maybe some of the best music released in independent country and roots this year. But nobody is listening.

There is no more important moment for an artist’s career than when they release an album, at least in independent music. That means you must pack a punch, push all of your chips in the middle of the table, and put every resource behind the purpose of bursting through the din of music and information being forced down consumer’s throats via social media and other channels, and task them to pay attention. This is your big moment. Don’t blow it by parsing out your music in bite size chunks that will get trampled under foot by all the other information flowing out through media, bust through with a big project and a proper media push that puts you on as many people’s radar as possible.

There is a reason all the most successful projects slavishly adhere to the tried-and-true rules of how to release an album. As boring and unimaginative as it may be, it is the most effective way to give music the greatest opportunity to succeed. You get no style points for releasing music in an unconventional manner. You just get ignored just like the vast vast majority of four-song EP’s.

This opinion is offered constructively, with the intent to help the cause of independent music, and is autonomous from the opinions of the music found on the EP’s themselves. It is also from somebody who has excruciatingly studied and obsessed over how certain artists rise, why certain artists fall or get overlooked, and what is most effective for pushing the career of an artist forward.