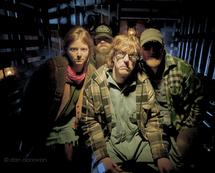 With all the junkets underground country bands have logged to and from Europe over the years, it was only a matter of time before the sprouts of the seeds they planted began to spring from the fertile Euro dirt. A fresh new crop of bands are joining some of Europe’s already established independent roots acts, and this includes the UK’s Rattleshack who’ve just released their debut, self-titled album.

For a long time a serious hunger for someone to trace back the original roots of country music cross global to the UK has been sitting out there ready to be tapped, and that is what Rattleshack does on this release. From Celtic jigs and folksy tales, to the legacy of the American storytelling song and Southern anthems, Rattleshack traces a nexus between English-speaking country and folk music, and marks a guidepost for the listener to see how the roots of the music all intertwine and share the same origin. It’s not that this hasn’t been done before, but it’s not been done nearly enough, and never with the fun, underground country twist Rattleshack displays while still conveying an accessibility and intelligence through really well-composed and well-written tunes.

The album starts off with the song “Dead Man’s Creek” written by the band’s bass player GÃ¨ne Pellier, featuring lyric support by America’s Bob Wayne and a blend of female vocals from Rattleshack’s fiddle player Georgia Shackleton that give you that nerve-tingling vibe only experienced when the most well-orchestrated lyric line hits your ear. Yet you may listen to this lead single and think they’re just another short branch off the Hank3 influence tree. That’s when they hit you with the whimsical “Untrue Story” where Georgia Shackleton bears her naked accent out there unabashedly in a fairytale-ish story that still fits Rattleshack‘s largely dark mood. This leads into the Old World “Hit The Door” jig overlayed on the banter from an American automobile auctioneer. Both songs underscore Rattleshack’s compositional smarts and instrumental skill with guitar, mandolin, and fiddle. 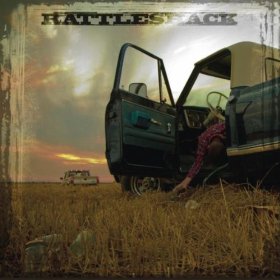 All of a sudden you begin to sense this isn’t just another “same song, different flavor” run-of-the-mill underground country album. Rattleshack takes their music seriously, and can move between influences from a wide swath of the roots world with dexterity and adeptness. It never feels like they’re on the outside looking in of anything. At times the feeling is that they understand the music more than some of the originators. Take for example the hell-raising “Hillbilly Hick.” This could be taken as total seriousness, or absolute parody, but either way it encapsulates the influence of the Hank3 “punk-gone-country” era perfectly, and overrides any preconceived notions anyone may have with country punk to simply be enjoyable.

Andy Stanhope is Rattleshack’s primary singer and songwriter, and in tracks like “Son o’ Dixie” he shows his studiousness and breadth of knowledge with America’s songbook beyond his primary underground country influences. A lot of Rattleshack is spent with storytelling songs that include very specific characters, like the moonshine-running “Legend of Jackie Tiger.” Georgia Shackleton offers her own story in the short and sweet “Tracy Lynn.” Though at times some of the storytelling songs become a bit tedious, one of the biggest takeaways from Rattleshack is the variety this album boasts, being able to jump around from influence to influence, and even from continent to continent, yet still offer a seamless expression all their own.

As underground country continues to grow older, its not always the bigger, established, more recognized names of the movement that are defining the cutting edge of creativity. It’s the bands and artists working on the fringes that take the influences of these legacy underground artists and continue to push forward. With their debut album, Rattleshack announces themselves as one of those bands defining the cutting edge.