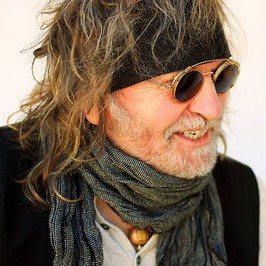 In the mid 70’s Ray Wylie Hubbard went by the handle “The Forgotten Outlaw.” And though he leans much more towards the blues these days, his music is many times misappropriated for country. In the blues world, there’s an element in the mythos called “paying dues.” And Ray has payed his many times over. Of course the reason you pay your dues is to hopefully reach a payoff, and Ray was be cashing that in at least in some small part when he made an appearance on The Late Show with David Letterman Wednesday night (1-9-13).

“Well I know 66 is kinna old to be making my first appearance on late w/ night david letterman,” Ray said through Twitter.  “But I didn’t wanna peak too soon.”

Though many A-list entertainers from a swath as wide reaching as Willie Nelson to Ringo Starr consider Ray Wylie both an influence and a friend, his name still remains in the “yeah, I think I’ve heard of him before” status with most of America, or like Ray puts it sarcastically, he’s a “Music book smudge, country music stain.”

It’s pretty telling that Ray has to travel 1,800 miles to play Letterman to get the national attention he’s deserved these oh so many years, when Austin City Limits–originally set up highlight Texas talent to the rest of the world–has mostly alluded him. His only appearance on the hometown format was when Hayes Carll invited him up on stage for a song a couple years back. Oh, and there was that time Willie Nelson pulled out Ray’s “Up Against The Wall Redneck Mother” on ACL’s pilot episode in 1975.

Meanwhile David Letterman whose locked in a ratings tussle with Leno and the recently-rescheduled Jimmy Kimmel decides to supplant booking a musical guest the American public already knows for one they damn well should. Along with other independent roots acts like Jason Isbell, Justin Townes Earle, and Jessica Lea Mayfield, Letterman and his peeps have stepped up to the plate when it comes to representing the rising Americana roots scene of which Ray Wylie is a pillar and patriarch of. Meanwhile ACL is pulling household name talent from the coasts, causing a criss-crossing of traveling musical acts that can’t be healthy for America’s carbon footprint. It sure is a strange, post-digitization music world out there.

“Mother Blues” is about the perfect song for Hubbard to play on Letterman because it is both specifically autobiographical and generally badass. It highlights many of the songwriting attributes that have made Ray the legendary “Wylie Llama” in songwriting circles: humor, ribald, and cunning songcraft. Even more appropriate that he would play it with his son Lucas Hubbard accompanying him on lead guitar because Lucas is referenced in “Mother Blues” along with Ray’s wife, and the song is named for the semi-legendary blues venue where Ray got his start in Dallas. And don’t forget that gold top Les Paul…