Tom VandenAvond is one of these wheel guys. James Hunnicutt is another. They may not be the flashiest of artists, but when you sit back and study the music, you find these wheel guys are essential to it in so many ways; how everything seems to revolve around them. They are the trunk from which so much other music grows. Trace the veins of the music and you find that their songs and work create foundations and inspiration for so many others.

Just in recent memory VandenAvond’s name could be found on albums by Willy Tea Taylor and Scott McDougall. Some will tell you Larry & His Flask are all grown up from the underground roots world, but here they are once again backing Tom up, just like they did on his last album. The weighty respect other performers and songwriters have for VandenAvond illustrates just how influential his music is.

VandenAvond is a pure songwriter. As much as people love to babble on about how songwriting is such a noble art and pat their favorite artists on the back for being so great at it, few delve into the inner workings of the craft like Tom VandenAvond. Comparisons are made to Dylan because of VandenAvond’s voice. Artists comparisons are rarely fair to either side, yet this one is understandable because just like Dylan, VandenAvond is a writer that sings, not a singer that writes. When it feels like the music is getting in the way of the story, this can be a symptom of an upper stratosphere songwriter who it sometimes takes interpretations of their songs from other artists to make their work accessible to the wider public. 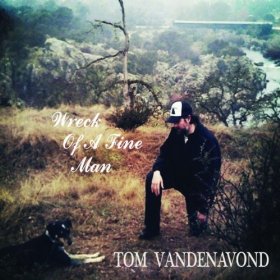 Luckily though, VandeAvond had the ridiculous talent pool of Larry & His Flash backing him up on Wreck of a Fine Man. This allows his compositions and brushy voice to be bolstered with magnificent arrangement and instrumentation, displayed no better than on the title track for this album that I truly believe is one of the best songs so far this year. The song “Wreck of a Fine Man” rises to that level from the combination of excellent lyricism and structure from VandenAvond, and the gorgeous harmonic sighs and ascending string lines in the chorus that create a musical mood unmatched.

Another marquee track was “Busted Knuckles”. What VandenAvond does so well is to stencil broken down characters you can believe in when their stories are told through his shaggy voice, and he creates lyrical lines that he calls back on throughout a song to mold a catchy, revolving theme, like he also does in “But, Anyway Now I Gotta Go” and “Where They Say You’ve Been Livin'”. Another great track was “Meet Me At Weber’s Deck” where regardless of your knowledge or participation in the annual summer ritual outside of St. Paul, MN, you can relate to the story of a place to feel comfort and camaraderie.

Even diehard VandenAvond fans must admit that it’s difficult to characterize his music as accessible. He is a hard sell. This isn’t helped by the slight amount of muddiness in this recording, just like some of VandenAvond’s other albums. Tom does not have a stark voice, and doesn’t use sharp lines or a consistent cadence in his phrasing that people are used to. You must get over that and understand this is his style, and that it benefits the music and the broken down themes he sings about. But the recordings can be a little frustrating to the ear, especially because Tom’s words and Larry & His Flask’s arrangements and performances are so spectacular, you want them right out there and clear for you to enjoy. I appreciate the lo-fi approach, but just a little more clarity might have awakened some of the dynamics of these tracks and created a more approachable work.

But the substance is all here, and I can’t help to think of what an impressive song catalog VandenAvond is amassing, which could be pilfered in years to come by bands looking for that deep soul that only the most serious of songwriters can evoke, while at the same time challenging his current songwriting peers to match his substance and depth, promoting a healthier, more vibrant music world than it would rather be without him, for now and into the future.

Purchase Wreck of a Fine Man from Hillgrass Bluebilly Records