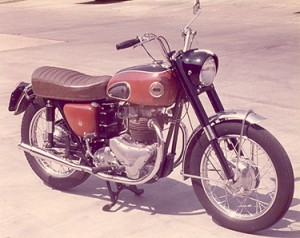 Out on the road, Waylon’s crew was known for pulling some pretty elaborate pranks for the big man’s birthday. For a while, a staple of Waylon’s live show was to have Waylon’s wife Jessi Coulter walk out from the side of the stage near the end of a show singing the duet “Suspicious Minds” on a wireless microphone. Well one night in Salem, OR, the crew dressed up tour manager David Trask in one of Jessi’s dresses with a wig, and while Jessi sang on the wireless microphone backstage, the transvestite-looking Trask sashayed out of stage left toward Waylon holding the core of a paper towel roll. “I almost swallowed my guitar pick,” Waylon said later.

But possibly the most memorable Waylon Jennings’ birthday moment came when Waylon kickstarted a vintage 1958 Ariel Cyclone motorcycle inside a hotel room at midnight in 1979.

As a lot of Waylon Jennings fans know, Waylon and Buddy Holly were big friends back in Lubbock, TX in the late 50’s. Waylon played bass for Buddy when Buddy’s Crickets took a hiatus, and Waylon was the one that gave up his seat to The Big Bopper on that fateful night in 1959 when a plane crash took Buddy, The Big Bopper, and Ritchie Valens lives, memorialized as “The Day The Music Died” and put to song in Don McLean’s “American Pie.”

1 1/2 years before in May of 1958, Buddy Holly and his original Crickets flew in to Dallas’s Love Field airport on a connecting flight back to Lubbock after a big tour. 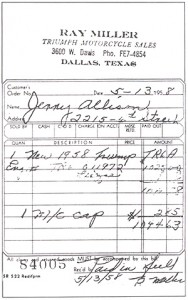 “They loved Marlon Brando in “The Wild One,” and when they got to Dallas…they decided on the spur of the moment to buy motorcycles and drive back home on them.” Waylon recalled. “They took a cab into the city and walked into a Harley-Davidson shop. They had their eyes on a trio of 74-inchers, but the proprietor didn’t think they had any money and treated them like a bunch of bums. “Hell, you boys couldn’t even begin to handle the payments on that.”
“Then they went over to Miller’s Motorcycles, which specialized in English bikes. There, Joe B, and J.I. (Allison) bought a Triumph each, a TR6 and Thunderbird, respectively, while Buddy picked out a maroon and black Ariel Cyclone, with a high compression 650cc Huntsmaster engine. They paid cash, bought matching Levi jackets and peaked caps with wings on them, and rode home through a thunderstorm.”

Buddy Holly’s father had kept the motorcycle until 1970, when he sold it to someone in Austin, TX. Then in 1979 for Waylon’s 42nd birthday, the two remaining Crickets Joe B. and J.I. tracked down the 1959 Ariel Cyclone, bought it back, and had it hand delivered to north Texas where Waylon found it sitting there in the middle of his hotel room after walking off stage that night.

“What else could I do? I swung my leg over it, stomped on the kickstarter, and it burst into roaring life. First kick. It was midnight, and it sounded twice as loud bouncing off the walls of that hotel room. I knew Buddy wouldn’t mind.”

UPDATE: In October 2014, the motorcycle was auctioned by the Waylon estate, and has since ended up in the Buddy Holly Center in Lubbock.

(Waylon quotes from “Waylon, An Autobiography” by Waylon Jennings and Lenny Kaye. Photos from bikemenu.com and Steve Bonner, Receipt from J.I. Allison.)