Should “Texoma” Be The New Term for the Indefinable “Texas Country/Red Dirt” Scene? 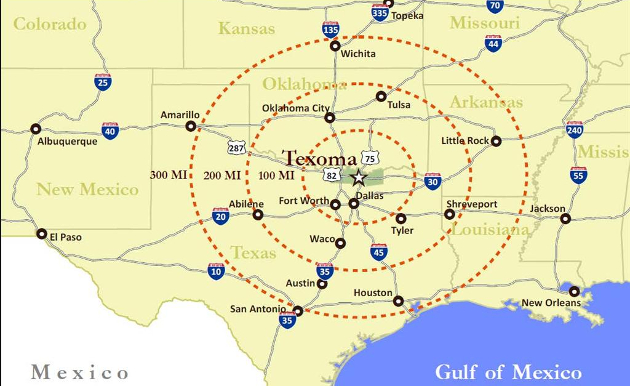 Look, we’d be lucky to get 50% of folks to agree with this, let alone universal acceptance and implementation. But what most everyone can agree on is that there is a problem. So just hang with me for a second. We’re just riffing here.

Right now the biggest “scene” in country music, and maybe in all of American music, is the scene that exists in the states of Texas and Oklahoma, generally revolving around country, country rock, some blues, and singer-songwriters, with tentacles that reach farther sonically for sure, and with certain little outlying geographic enclaves here and there around the country. But it’s a scene of music that is defined more by geography than it is a sound. This is something we all agree on.

When referring to a “scene,” we’re talking about something smaller than a genre, outside of the mainstream, but bigger than any one clique of artists. It’s a centralized and autonomous sect of music that often has its own infrastructure such as festivals and touring circuits—or in the case of Texas/Red Dirt, even its own radio stations—and many of the artists know each other, share many of the same managers and booking agents, etc., and collaborate and tour together often.

Possibly the easiest segment to define is Red Dirt. But one of the problems is Red Dirt doesn’t have a definable sound. It’s defined more by geography, and a time and place. The only artists still out there touring and playing that truly have a claim to the term “Red Dirt” are folks like Cody Canada, Jason Boland, and the Red Dirt Rangers—people that have direct ties to “The Farm” outside of Stillwater, Oklahoma in the 80’s and 90’s.

For those that don’t know, The Farm was a big two-story house on 149 acres outside of Stillwater where musicians would hang out picking, playing, and writing music till the break of dawn. The scene around The Farm started in the late 80’s, with artists renting the rooms in the house, and others pulling RV’s out to the property to live cheap or free so they could have time to write, record, and play music. The house on “The Farm” burned down in 2003 when some of the newest Red Dirt/Texas Country artists were still in grade school. Cody Canada was there. Jason Boland was there. But many weren’t. The term “Red Dirt” itself describes the geographic borderland between Oklahoma and Texas and its signature iron-rich or “red” soil.

Many of the founding fathers of Red Dirt who took younger artists under their wings and helped launch the movement are now gone. Singer and songwriter Bob Childers passed away in April 2008 in Stillwater. Songwriter Tom Skinner passed away in July of 2015. And Jimmy LaFave, the final surviving father of Red Dirt, recently passed away in Austin after a fight with Cancer.

One of Jimmy LaFave’s defining records was his 2001 album Texoma. It’s influences were the sonic and geographic borders that comprised the dual citizenry he shared with Austin and Stillwater. Jimmy LaFave was personally responsible for helping to cross pollinate the two different scenes of music in conjoining states, and making people see the similarities and kindred spirits of Texas and Oklahoma music, even if the sound was far ranging and indefinable.

The term “Texoma” predates the music scenes in Stillwater and Austin. The portmanteau (a word that combines two words) has been used to describe the geographic region around Lake Texoma which straddles the central portions of the border between Texas an Oklahoma, and is fed by the Red River, which is the official borderline between the two states. The reason the river is called “Red” is for the same red clay referred to in “Red Dirt” music.

But today, many Texas Country artists are coming from the Lubbock region, which really does have any ties to the Red Dirt legacy. The Turnpike Troubadours are from Talequah, Oklahoma, which is hours east of Stillwater. “Red Dirt” in many ways could still encompass the music scene of the two states, but that almost seems insincere and disrespectful to all the artist that were part of the original Red Dirt movement, many of which have now passed on or retired. It seems weird to refer to the Turnpike Troubadours as Texas Country, just as it feels weird to call William Clark Green Red Dirt.

On the other hand, Texoma encompasses all the facets of the music scene on either side of the border, while also containing the spirit of the music that can be adopted by fans and artists in nearby Louisiana, Arkansas, Kansas, and parts of Missouri which are quickly adopting the regional influence of the music, and even outside of the region in other enclaves no matter where the geographic origin.

“Texoma” is also a way to honor the legacy of artists like Jimmy LaFave, all the original Red Dirt pioneers, and the people and artists who stretched out arms across state lines to form a healthy and vibrant musical community that fans and artists enjoy today, and autonomously from the awful nature of the music business in Nashville. One of the big obstacles standing in the way of offering a true alternative to Music Row for artists from the region and beyond is a universally-recognized name to unite under.

What gives Saving Country Music the authority to unilaterally choose the name of a music scene? Absolutely nothing, though the term started to creep into SCM’s coverage of the region’s music two years ago as a more appropriate and respectful way to describe the scene. Ultimately, the best nicknames are not the ones chosen through brilliant deduction, but are adopted organically in nature almost by happenstance. You think Jody Rosen set out to define “Bro-Country” when he dropped the term haphazardly in a critique of the subspecies of country? It wasn’t Rosen who defined it. It was everybody else adopting the term en masse. The best nicknames take off by mistake.

But that doesn’t make “Texoma” a bad idea. I bet Jimmy LaFave would approve.