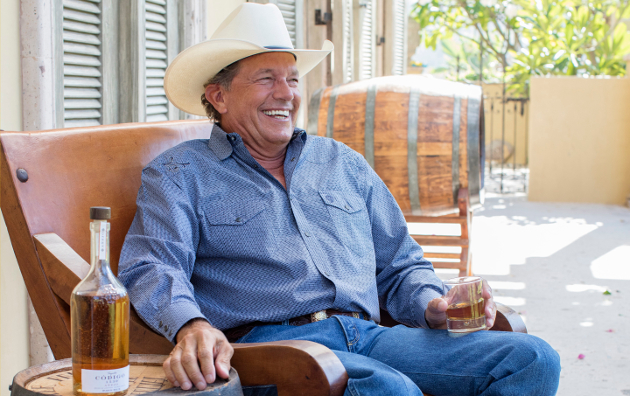 Like Ralphie from The Christmas Story waiting for his Little Orphan Annie secret decoder pin to arrive in the mailbox, we’ve been dutifully checking our email inboxes and social media feeds for any news on new music coming down the pike from the King of Country Music himself, George Strait.

On Friday (12-7), our prayers were answered when it was blasted out far and wide that King George had a brand new song out. Breathless and frothing with anticipation, we plugged in our earbuds at the office work station, or took a smoke break out in the truck and cued it up the stereo, or synced the track up on the smart home speaker. And some of us, similar to Ralphie after he’d translated Little Orphan Annie’s secret code over the radio to reveal the message “Drink your Ovaltine,” sat slump shouldered and sad faced, uttering, “A crummy commercial?”

Look, “Código” is fine for what it is, and maybe even pretty good. I’m speaking of the song that is. Never tried the tequila. “Código” is George Strait singing. It’s son Bubba and Dean Dillon helping to write the tune. There’s fiddles and steel guitar, and even a little bit of squeeze box. The starch is fresh and crisp in George Strait’s jeans. Everything is in the right place here. It’s a classic country drinking song, and not too absorbed in itself. But it’s just a little less than the ideal way to present a new song from George Strait, especially since this is the first taste of new music from Strait since 2015, aside from a couple of bonus tracks from Strait Out of the Box, Part 2 a couple of years ago.

George Strait invested in the Código Tequila Company in 2016. It’s probably a cool little passion project for him. God knows he doesn’t need the money, but like the rest of us, he’ll take it if it’s there. It’s something interesting to keep him busy during his semi-retirement. It’s a hobby, and it’s not unusual these days to see folks dabbling in spirits as a side endeavor. Código is an ultra-premium tequila that was consumed privately by a small group of Mexican families for years before becoming commercially available. Strait apparently became hip to it when vacationing in Mexico. It comes in a variety of different “expressions” such as Blanco and Reposado, and can go from $50-$300 a bottle.

If this were the 7th track on his next studio album (which apparently is coming up at some point in early 2019), it would be one thing. But as the lead single? It lacks a little bit of self-awareness to sell “Código” the song and not expect folks to either connect the dots, or not care why Strait chose this particular tequila product to serenade. Granted, it’s not unusual for country stars to write jingles or schlep products, far from it. Just check out the Hank Williams relationship with Mother’s Best Flour, or Willie Nelson singing about the woman with the rose tattoo for Taco Bell. Dale Watson owned a little beer joint just east of San Antonio, and cut a song to (semi) promote it called “Big T’s.”

But when you start to blur the lines too much between what is a song and what is commercial, it ceases to be cool. We get it when an artist wants to make a little pocket cash with a product endorsement. Everyone’s got to eat. Or in this case, drink. But keep the division lines clear. The song “The Middle” by EDM star Zedd sang by Maren Morris was just nominated for two Grammy Awards. It was originally commissioned as the backdrop for an extended commercial by Target that played during last year’s Grammy presentation. But the song itself isn’t about Target.

There’s no reason to get too hot and bothered about “Código” – the song that is. Again, I haven’t tried the tequila, but the more you spend, the better it tastes … or at least that’s what we tell ourselves. But this song should have been an album cut, or maybe the third song released from the new album, not the first.

Yet just like a fine aged beverage, country artists seem to get better over time to the point where it almost doesn’t matter what they sing about. The weight of their legacy carries such a magic unto itself. It’s just fair to want to make sure George Strait’s magic doesn’t lose it’s luster in the pursuit of commercial conquest. But once you get used to the bitterness, “Código”reveals itself to be finely crafted. It goes down smooth, with a robust aftertaste. It’s there to be enjoyed, and it’s hard not to. So you know, enjoy responsibly I guess.