Song Review – Terri Clark’s “Young As We Are Tonight” 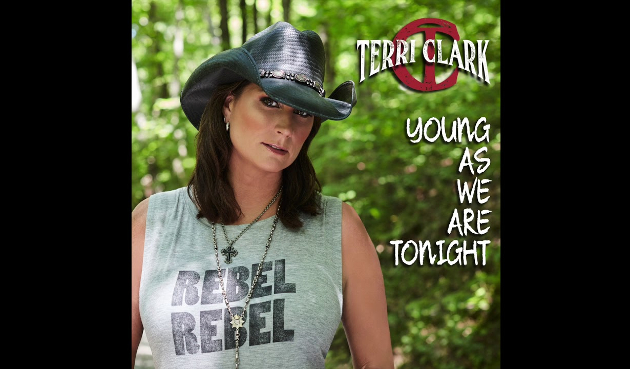 It’s fair to question whether the latest single from Terri Clark is even worth paying attention to, or criticizing. Her relevance south of the Canadian border hasn’t been felt in over 10 years aside from hosting a radio show via Cumulus, even though the Canadian broadcast rules have helped extend her career and allowed Clark to sustain in her native land well beyond her American lifespan. Her numerous Top 5 hits stateside in the 90’s do make her an interesting character if she wanted to come back and make waves as a resurgent traditionalist. But that’s not what’s going on with her latest single “Young As We Are Tonight.” It’s about as far from resurgent traditionalism as possible.

A few years ago Terri Clark tried to spearhead a movement she was calling “#BraCountry.” Obviously a take on Bro-Country, the idea was to be more inclusive to women on radio and such by giving them their own movement. “I’m starting a movement called ‘Bra Country’….to compete with all of this ‘Bro Country’….c’mon girls !!!,” Terri said in January of 2014. This was also around the last time Terri Clark was releasing new singles. We thought Clark meant for BraCountry to be an alternative to Bro-Country, not to be a way to emulate it. Unfortunately, that’s exactly what’s going on with “Young As We Are Tonight.”

Not since Keith Urban have we witnessed an artist trying so transparently to defy their age, and grasp for radio relevancy. “Young As We Are Tonight” is just bad all around, from the writing to the production. Clark and her defenders will make the point that if you actually listen to the lyrics, they’re explaining how you will never be as young as the moment you’re living in right here, right now, which can be an important lesson to heed regardless of your age. That might be true, but when paired with the production and the delivery of the song, the attempts at assuring us this is anything but a desperate reach for a younger audience ring hollow.

“Young As We Are Tonight” will not go anywhere—at least not in the United States—which again begs the question of why we’re even concerned with it. But there arguably isn’t a better example of what an older country artists should not do later in their career. Even if “Young As We Are Tonight” is a rousing radio success (which it won’t be), it will be at the expense of the legacy Terri Clark has built for herself with fans that frankly veer older.

Recently we’ve seen this move by aging artists more and more. Joe Diffie released the godawful “I Got This” that went absolutely nowhere. David Lee Murphy thought he would have a huge resurgence in his career by landing a #1 hit with Kenny Chesney in “Everything’s Gonna Be Alright.” But when his new record No Zip Code was released, it sold only 2,600 copies. Even if you do land a big radio hit, it’s often at the price of losing your established fans who can turn their back on you, while fickle younger fans move onto the next song from Kane Brown and don’t give you a second thought.

Terri Clark has put together a fine country music career, both as a performer and as a radio personality. Why risk that good will by releasing a single like this? Clark has probably earned enough cred not to be rude about it, but this is clearly not the right path moving forward for her, or any older artist. When you mention Terri Clark, many people think of her older hits like “Better Things to Do” and “Suddenly Single.” She was like a female version of Dwight Yoakam, with her hat pulled down too low, tight jeans, and a cool attitude. So radio lost favor with her, just like it did with Dwight. That’s nothing to be ashamed of, and radio is not the institution it once was.

Don’t change your style to stay relevant on a format that’s losing relevancy itself. Be yourself, for better or worse. That’s actually what were seeing from mainstream artists lately like Tim McGraw, Dierks Bentley, even Blake Shelton and Kenny Chesney, and it’s working for them.

Radio may not always be there for you, but your fans will be if you don’t let them down. It’s probably not worth proclaiming “Young As We Are Tonight” as a death sentence for the Terri Clark legacy, because it may not even receive enough attention to be considered as such. But it certainly is a misstep, and one that should be avoided by all older artists in the future.

Be yourself, radio be damned.