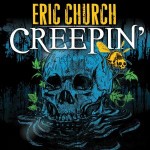 Let’s not mince words: Eric Church is a two-faced prick. He’s cheesed off more of the mainstream country establishment than he hasn’t, and not for good reasons, but for being rude, arrogant, and at times hypocritical. And then there’s the whole thing where he swears he’s not an Outlaw, but then sells shirts that say that he is.

But the job of any honest music reviewer is to divest any off-stage drama or personal feelings about a man from his music. I’m still being nailed to the cross in some circles for giving Eric’s album Chief 1 1/2 guns up. Much of that positive review stemmed from the strength of this song.

Let’s first get the most obvious complaint out of the way. “Creepin'” isn’t country, it’s a rock song with some country-inspired elements. In parts it’s driven by arena rock riffs, and the chorus comes across as a little obvious. Just because something is rock though doesn’t mean it’s wrong, it just means it is mischaracterized in the country format.

The catch-all, stock argument made against folks that complain that rap, rock, and pop influences are encroaching too heavily into the country genre is to say that country must evolve. Eric Church has made that argument himself in the boldest of terms when he wrote the song “Country Music Jesus”, inspired by an article on Saving Country Music.

There’s this writer, at the time that kinda had written a critique of the new country Outlaw movement. Said something about “I wish all these new guys would do it like the old guys did it, and make the same music, the same way, over and over.”

Of course this is an erroneous take of Saving Country Music’s stance. Many times adding influences from genres outside of country results in devolution of the music because the motivation is to make the music appeal to the widest possible audience by attaining the lowest common denominator. Of course country music must evolve, and it has been in the independent, Americana, and underground country worlds for years to the general ambivalence of the mainstream.

But none of this has to do with “Creepin'”. In the mainstream of a genre that has grown stale with laundry list cliche songs, gimmicky pop and country rap fare, and droning adult contemporary ballads, Eric Church and “Creepin'” display bold, creative leadership. This song takes chances. There’s few “sensibilities” here, no resorting to the easy avenues of country lyrics delivered in rap pentameters, or overt pop elements to draw a bigger crowd. Instead there is striking out in uncharted mainstream country territory.

“Creepin'” has a very catchy, rhythmic base, but adds a depth dimension by layering and texturing the rhythms with different tones and instrumentation. This gives it a sort of epic, evolving, breathing nature. By Eric Church mouthing the hook of the song at the very beginning, it’s almost like he’s saying, “Okay, here’s the starting point. Now watch what we do with this.”

Country purists will be bemoan Eric’s moderate, but obvious use of vocal filters and loops, but the approach of these sonic tools is to replicate and emphasize decay as opposed to let’s say Auto-tune meant to deceive by feigning perfection. Eric’s employment of technology is more akin to megaphones and moog than drum loops and synth, and it is well-balanced. Any more and it would have eroded any “roots” in this song, any less and the spatial, trippy nature he envisioned may not have been realized. This is no different than what Emmylou Harris did on Wrecking Ball some 17 years ago, just this song may receive widespread radio play.

Lyrically “Creepin’ is refreshingly ambiguous and fey; subtle and oozy where it can crawl into the contours the mind of each individual listener to be interpreted differently by different perspectives. As Church told the Rolling Stone:

It’s a lot deeper than some people think. It’s really about this guy who’s haunted by a ghost of some sort, the main female character. What you don’t know is she’s the one feeding the coal that makes this train get crazier and go farther and take him back through all these memories.

None of this is easy to translate to the physical representation needed for a video, but that’s exactly what Eric Church does in this gritty, train-themed cinematic-style short.

Eric Church has a large army of detractors that will look at this video, see his little rat-looking face and won’t care what transpires next; they won’t like it. And with all of his off-stage extra-curricular activity, it’s hard to blame anyone with an anti-Eric Church reactionary prejudice, or wonder why some will say  “Creepin'” is Eric exploiting underground influences for mainstream fare.

I certainly don’t have much love for the guy and certainly don’t find the appeal in many of his songs. But he struck gold here, however intentional or accidental, and it’s good to see some substance finally “creep” onto mainstream country radio, even if it’s really rock.