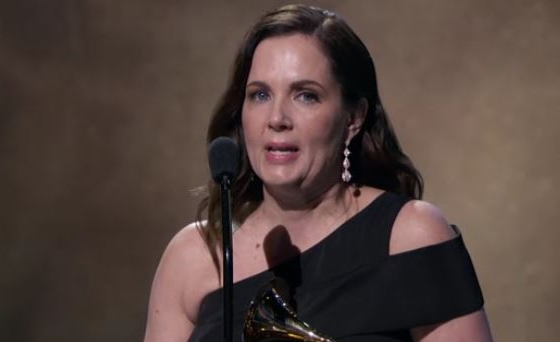 A special moment ensued on the stage when Rory Feek of Joey + Rory accepted the Grammy for Best Roots Gospel Album for Hymns. Rory has said that his wife Joey Feek wanted him to be there whether they won or not, but that she would know before he did. Joey passed away in 2016 due to Cancer.

In the roots categories, Rounder Records and Sarah Jarosz were the big winners, with Sarah walking away with both Best Americana Roots Performance, and Best Folk Album. The Time Jumpers who won for Best American Roots Song are also on Rounder.

It other country-related pre-telecast news, Reckless Kelley’s Sunset Motel, which was up for Best Recording Package, did not win. Hillary Scott and the Scott Family (singer for Lady Antebellum) did win for Best Contemporary Christian Music Performance (song) for “Thy Will,”  and for Contemporary Christian Music Album for Love Remains that was produced by Ricky Skaggs. Bobby Rush also won for Best Traditional Blues album for “Porcupine Meat.”

The Mark O’Connor Family band performed the bluegrass standard “Ruby” on the pre-telecast to represent the Grammy’s roots categories, and Sarah Jarosz was also featured as one of the presenters.