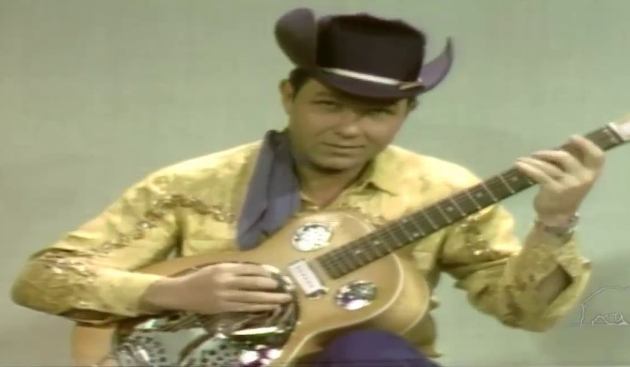 One of the very last true links to the Golden Age of country music has retired to the great honky tonk in the sky. Leon Rhodes, one of the most famous and influential Texas Troubadours behind Ernest Tubb, as well as one of the mainstays of the Grand Ole Opry house band, and the backing band on the television show Hee-Haw for many years, died on Saturday, December 9th.

Born on March 10th, 1932 into a Pentecostal home, Rhodes often claimed he went to church nine months before he was born. That didn’t keep him from a life of music, however. A native of Dallas, TX, his father bought Rhodes his first guitar at the age of 14, and his first major gig was at 16 playing for the Big D Jamboree in Dallas at the Jim Beck recording studio, famous for also recording Lefty Frizzell and Ray Price. Throughout his career, Rhodes would also play drums, sing, work on guitars, drive busses, act as the accountant, or do whatever else was asked or assigned to him. But it was his guitar playing that would rocket him into country music history, playing jazz-style honky tonk on a big bodied Epiphone guitar.

In 1960, Ernest Tubb hired Rhodes as the lead guitar player in his band. He was first discovered playing at the Longhorn Ballroom in Dallas. At the time, Rhodes was also playing drums, and playing in a professional fast pitch softball team along with the guitar playing. He also worked on and off for notorious Dallas native Jack Ruby, who owned clubs in the Dallas area.

After being convinced to move to Nashville, Leon would become a part of the most legendary lineup of Ernest Tubb’s Texas Troubadour band, which also included steel player Buddy Charleton, bassist Jack Drake, drummer Jack Greene, and Cal Smith. Rhodes would spend 6 years in the band, and during that time recorded his self-penned “Honey Fingers,” which would later become his nickname.

During this time he also became a 20-year mainstay of the Hee-Haw house band. Rhodes eventually left the Opry in 1999 to tour behind Porter Wagoner, but continued to play the Opry and other stages around Nashville for many years beyond. He also played in the backing band of Marty Stuart for a while before Marty formed The Fabulous Superlatives, and appeared on episodes of “Marty Party.”

“In my opinion, Leon was one of the greatest country guitarists of all time, and one of the finest jazz men to ever take the stage in a cowboy suit,” says current Fabulous Superlative Chris Scruggs. “Yes, it was Tommy ‘Butterball’ Paige who wrote the book on how to play lead guitar for Ernest Tubb, and Billy Byrd who made the guitar just as much a starring feature as ET’s voice. However, Leon added a level of sophistication to the established style and elevated it into something that was elegant, refined and well spoken…”