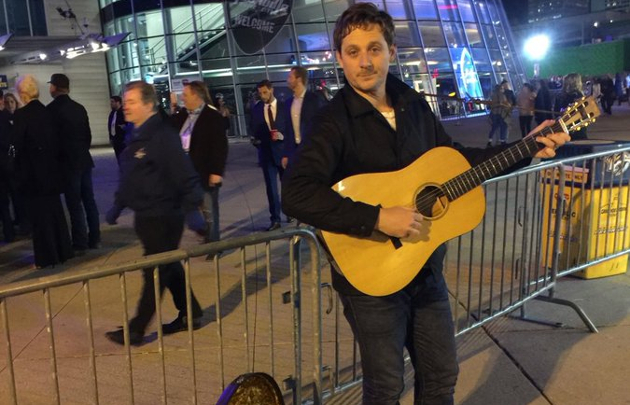 As the CMA Awards were transpiring Wednesday (11-8) night inside the Bridgestone Arena, Sturgill Simpson decided to take his guitar, his Grammy for Album of the Year from 2016, and do a busking set in front of the arena as local journalist Adam Gold broadcast the whole thing via Facebook Live. The entire episode lasted about 45 minutes, with Sturgill Simpson taking questions, and playing a few songs.

Sturgill had made two small signs for the busking set, one that said “I don’t take requests but I take questions about anything you want to talk about . . . because fascism sucks,” and another that said, “Struggling country singer . . . anything helps (all donations go to the) ACLU God BLESS AMERICA.”

The event itself became a pretty significant sidebar to the CMAs themselves, with multiple media outlets breaking into their CMA coverage to cover Sturgill. We’ll cover some of the implications and results of Sturgill’s words and actions in due course. But since he laid out quite a bit of information, we’ll spell that out here first.

Also, though many have characterized it as a protest against the CMAs, that not really how Sturgill semed to view it. He said he hoped Jason Isbell would win, as well as Chris Stapleton and Miranda Lambert. He also mentioned that Keith Urban “was a really nice guy” and wrote him a kind email once. If he was protesting anything, it was the proposed, and then rescinded requests by the CMA for the media to not ask artists on the CMA red carpet political questions.

Here’s the biggest questions asked of Sturgill, and his answers.

What would your acceptance speech be if you won a CMA?

Nobody needs a machine gun, coming from a guy who owns a few guns. Gay people should have the right to be happy, and live their life any way they want to, and get married if they want to without fear of getting dragged down the road behind a pickup truck. Black people are probably tired of getting shot in the streets and enslaved by the industrial prison complex. And hegemony and fascism is alive and well in Nashville, TN. Thank you very much.

We’re doing some festivals this year (2018) just to keep the chops up while I’m working in between . . . I’m working on a bunch of really cool stuff. I’ve never had the downtime to make the record I think I’m about to make next, and it’s going to be pretty involved, and I’ll probably spend the better part of the next year working on it. But Richmond and the rest of the US in probably 2019.

About the Telecaster guitar he smashed on Saturday Night Live

It is fucking destroyed. I’ve been trying to kill that guitar for ten years. Maple is stronger than ash. The body completely broke all around the plate where the neck bolts on. So I glued it back together and it’s hanging on the wall at the house. So it’s a piece of art right now. And I might turn it into a table at some point, I don’t know.

On making a bluegrass record

I want to do a bluegrass record someday with all the guys from Kentucky that are still alive. JD Crowe, Bobby Osborne, Ricky Skaggs. That would be so fun.

Will Sunday Valley ever reunite?

Would you ever tour with Cody Jinks?

I’ve already toured with Cody. I’m moving in a different direction. Honestly, I love Cody and I love what he’s doing. I’m glad somebody came along and did what a lot of people probably wish I was still doing. But my head is just headed in a completely different direction artistically. But I’m super proud of what guys like him and Whitey Morgan, and Jason Boland and Jason Eady, and Tyler (Childers) and all them are doing. I kind of feel like my work is done in that realm. Someday I’ll wake up and feel like making a hard country record again, just that ain’t tomorrow. And that’s just me being honest.

On not being nominated for a CMA Award

I think that’s my fault. I think you have to submit to be nominated. And I’m not sure that we ever submitted, or if anybody submitted for me. I honestly don’t know. So that could have been my fault. I’m not going to say that I was snubbed, because I’m not sure that’s true. It’s really cool to see Jason (Isbell) get recognized on that platform though. I’m on a label now, and he’s a truly independent artist.

(EDITOR’S NOTE: Sturgill Simpson actually has been nominated and considered for CMAs. He just has never made it to the final nomination ballot.)

On not meeting fans after shows

It is typical. I have to save my voice. I also suffer from extreme social anxiety, and I’m a highly introverted individual. I used to run the merch booth myself. And then we got to playing venues where that just wasn’t feasible. If I run into people, I will stand and talk to them all day. But I have to save my voice so it’s tough every night to stand and talk to literally hundreds of people. I stared this thing way too old and late in my life to take the fame thing seriously. But if people want to come up, I’ll stand there all fucking day.

Are you still only making five albums?

Yes. I’m only making five albums. And they all do serve a cohesive narrative of a life journey of a human soul from a traditional Western perspective. So High Top Mountain was a seminal album or a past life, you can’t go home. Metamodern (Sounds in Country Music) was ethereal, literally like the soul’s journey through space. A Sailor’s Guide (To Earth) represents birth, and life lessons learning them. The next one is going to be about life and sin. We’re literally going to go to hell. And the fifth one will be returning to the light. Absolution.

Would you ever do an album with Jason Isbell and Chris Stapleton, Highwaymen style?

Absolutely, after I get my shit out of the way. I think it would be cool once we all get to the point where . . . like I’m only in competition with myself. So when I feel like I can’t outdo myself anymore, I think it would be cool if Jason, and Chris, and Margo (Price), and a bunch of people like that, if we just all went on the road together forever. I think that’s what the fans want.

Why don’t you play encores?

On The Grammy Awards

The first time I went to Merle Haggard’s house, he had one Grammy I think in his career. He was using it as a doorstopper to hold the front door open. So that immediately put a lot of things in perspective. People say (Grammys) don’t mean anything anymore, but that’s the one that to me actually means the most because it’s voted on my other songwriters, and engineers, and producers. Your actual peers that are saying that your work deserves to be recognized. So that’s something I don’t take lightly at all. I was very humbled and appreciative. And my grandpa lived long enough to see that, so that was probably the best part.

He’s a fascist fucking pig, and I’m not afraid to say that because at this point anybody who’s still supporting that guy can’t be anything in my mind but an ignorant fucking bigot. So there it is. Anybody that’s surprised to hear me say that is going to unfollow me or stop listening to my record was probably not listening that close anyway.