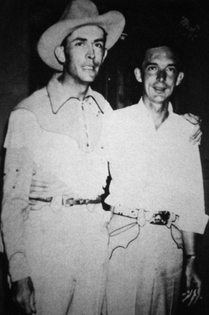 Picture right: Ray Price took over the Drifting Cowboys of Hank Williams after his death, before forming the Cherokee Cowboys.

Before there were reality show contests and overnight sensations in country music, artists were expected to pay dues in music before they could hit the big time. They had to prove their muster as performers, musicians, or songwriters before making it to the spotlight, and one of those proving grounds was behind an established musician, holding down a spot in their band. When it came to the band of the recently deceased Ray Price called the Cherokee Cowboys, that proving ground has a pretty remarkable list of alumni that made their way up the country music ranks with the help of Ray.

Much can be written about the influence and impact Ray Price had on country music. But there may be no better evidence then the list of performers who felt honored to play behind Ray during their rise. Here’s some of the most notable Cherokee Cowboys that went on to bigger fame.

In 1961, just as Willie Nelson was beginning to make it big as a songwriter with Faron Young cutting “Hello Walls” and Ray Price Recording “Night Life,” Willie heard that Ray’s bass player was leaving and applied for the gig. “Ray didn’t ask if I knew how to play bass, which I didn’t,” Willie recalls. Willie’s stint in the Cherokee Cowboys was not very long, but it was legendary. Willie would take his $25 wage and songwriting royalties and upgrade his hotel rooms to suites to throw big parties, and pay for commercial airfare instead of riding the band bus. Willie bought Ray Price’s 1959 Cadillac and gave it to his then wife Martha. But as Willie became a hot songwriting commodity, he moved on from Ray’s band. The man Willie replaced on bass was known as Donny Young, whose real name was Donald Lytle, later to be known as Johnny Paycheck.

Johnny Paycheck was known simply as Donny Young during his Cherokee Cowboy days, and he had a lasting impact on the band and Ray Price before being replaced by Willie Nelson. Just like Paycheck did when he played in George Jones’s band, he was not only a capable bass player that also could also sit in on steel guitar, Paycheck brought a tenor harmony to the table that made him an invaluable and influential resource to any band he played in. Paycheck’s tenor is given credit for heavily influencing George Jones’s singing style, and Paycheck’s harmonies can be heard on early 60’s recordings by  Ray Price, Faron Young, and fellow Cherokee Cowboy Roger Miller. 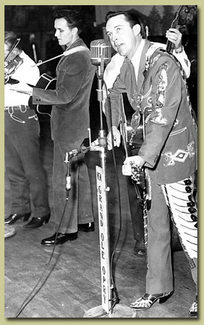 Roger Miller’s career path was quirky to say the least, but just like Willie and Paycheck, it ran through Ray Price. After starting as a songwriter and collaborating early on with George Jones during his Starday Records era, Miller moved to Amarillo to become a firefighter. Of course Miller was a horrible firefighter, and made his way back into the music business and out to Nashville by becoming a Cherokee Cowboy in 1958. Miller wrote the Ray Price hit “Invitation to the Blues,” and sings harmony on the recording. Ray Price returned the favor in 1982, singing harmonies on Roger Miller’s final hit, “Old Friends,” which was the title track of a collaborative album between Roger and former Cherokee Cowboy Willie Nelson.

Picture of Ray Price and Roger Miller on the Grand Ole Opry. rogermiller.com

Talk to anybody familiar with the history of the pedal steel guitar in country music, and they’ll tell you Buddy Emmons is one of the gods of the instrument, if not the best to ever play. He was the founder of Sho-Bud, and the innovator of the “split-pedal” setup of the steel guitar in 1956 which revolutionized the instrument and is still in practice with most steel guitar players today. After doing stints in the bands of Little Jimmy Dickens and Ernest Tubb, Buddy joined the Cherokee Cowboys in 1962, recording and touring with Ray Price until about 1967. He plays the famous steel guitar break on “Night Life,” and became Price’s bandleader during his tenure in the Cherokee Cowboys, contributing many of the arrangements to Ray’s most famous songs from that era. Lloyd Green once said of Buddy Emmons, “He is probably the most intelligent and talented musician who’s ever played the instrument. He’s like Picasso or Michelangelo.” And when he joined Ray’s band, he replaced another steel guitar virtuoso, Jimmy Day. Emmons left the Cherokee Cowboys to move to California and work for fellow Cherokee Cowboy Roger Miller.

Honky tonk country singer and performer Darrell McCall grew up in Ohio with Donald Lytle, aka Donny Young, aka Johnny Paycheck, and the two moved to Nashville as a duo. When the duo thing didn’t work out, McCall, just like Paycheck, ended up in Price’s Cherokee Cowboys, both in the  session recorder and touring band member capacity as a backup vocalist in 1958. A year later, McCall was contracted to be part of the band The Little Dippers, and a year after that, he was signed to Capitol Records as a solo artist, becoming a performer in the honky tonk style of country, and later in the Outlaw country realm. 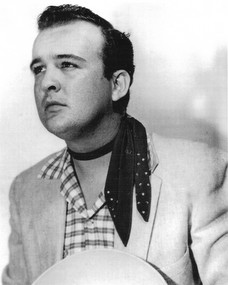 The legendary Texas performer and songwriter whose most famous for penning Willie Nelson’s signature song “Whiskey River” joined Ray’s Cherokee Cowboys in 1963. Like so many artists before him, the opportunity Ray Price bestowed to Bush led to greater success, and made lifelong friends of fellow Cherokee Cowboy artists. Johnny Bush also spent some time in one of Willie Nelson’s first bands, The Record Men, and Willie was a financial backer for Bush’s first record in 1967, The Sound of a Heartache. Bush was signed to RCA in 1972, but vocal problems kept Bush from being the huge star his talent afforded. To this day, Johnny Bush is a big star in his native Texas.

Other Notable Members of the Cherokee Cowboys: