“Damn it, the fight isn’t in Austin and it isn’t in Los Angeles. It’s right here in Nashville, right here two blocks from Music Row, and if we winand if our winning is ever going to amount to anything in the long runwe’ve got to beat them on their own turf.” Tompall Glaser

If you’re standing on the steps of the Country Music Hall of Fame in Nashville and start walking towards Music Row, you’ll walk along a road called Deomonbreun. Right before you get to the naked Musica statue (where some say Hank Williams’ house used to be), and the road snakes into Music Row East and Music Row West, you come to a gaggle of business scrunched together. In that strip is an establishment called Tin Roof, and though it may look like a typical Fern Bar from the street, the bar boasts a stage where some of the best songwriters in town showcase their wares every Tuesday night in a showcase known as The Revival.

The brain child of songwriter Rob Snyder, The Revival is celebrating its two year anniversary next Tuesday, May 19th. A songwriter in-the-round setup with just acoustic guitars, The Revival is a place to not just be seen, but heard, and one of the few places you’ll find true songwriters still playing inspired songs mere steps from Music Row proper.

“Basically what we do is we have a church pew setup in the back of the Tin Roof. We book one guy and let him pick the other two guys that he’s in the round with. It’s pretty free form,” says Rob Snyder. “We ask them to play the songs they love, not necessarily the hits. We want to hear your best songs.”

Snyder says he started the Tuesday ritual both out of love for songs, and from a little frustration.

“There was a few of us like-minded people here in Nashville that were looking for a purpose to showcase songs that are really good songs. There are a lot of really good songs in Nashville, they’re just not getting heard. There’s rounds all around town, but ours is definitely different. We’ve had some big names come in there, and had some hit makers come in there, and we don’t discriminate against anybody by any means. We just ask that they play their best songs and their favorite songs.”

What kind of hit makers? “Brent Cobb, Hayes Carll, Jonathan Singleton,” Rob says, and The Revival is not just where songs get heard, but where deals can get struck and songwriters get noticed. “We had a guy play and someone heard his song, loved him, and gave him a ’68 Les Paul [guitar] the second time we ever had The Revival. We’ve had guys get publishing deals by playing a song. I played a song three weeks ago and I was closing my eyes, looked up, and Lee Brice was sitting there and he like, ‘Dude that is an awesome song.’ Things like that are just cool to happen there that don’t really happen anywhere else in town.”

“I actually wasn’t helping to host it at the beginning of it, but Rob had asked me to play,” explains Channing. “The very first revival he had was me, Brett Cobb, and a guy named Leith Loftin on a church pew. Tyler Farr was in the front row, Jerrod Niemann and some of those big hit guys were there. Chase Rice was there, and Chris Young. You have to understand this is Tin Roof, where these guys hang out. So we’re kind of doing this, not for malicious reasons, but like right in the heart of what we love and hate about the town. It was just a really good show the first time. Brent and I just went into a 10-minute gospel medley of ‘I Saw The Light.’ It was a really magical moment, and we knew this thing was going to be pretty special. And over the last couple of years it’s just become the place to be if you’re a songwriter in the Music Row area of town.”

“We’re wanting to give a place for guys who are fighting to keep integrity,” continues Channing. “But also trying to find our way in a town that really … I don’t want to complain about the town because the town is actually really really good. But to be against the grain today, you have a lot of different avenues you can take, but obviously Nashville if you want to play country music is where you want to be if you want to make a difference.”

Something the frustrates songwriters like Channing Wilson and other participants of The Revival is the stereotype of Nashville as only harboring the mainstream country music industry when in truth there’s so much more.

“Guy Clark, he writes every single day, and he lives two miles from Music Row, Channing says. “Jason Isbell lives here, Sturgill Simpson lives here. I try to tell people that all the time when they start hating on Nashville. It’s not the town, it’s really just radio that represents the world of country music in an unfair way.”

Who can you expect to see at The Revival if you show up on a Tuesday night? Average Joe fans or industry types?

“It’s probably 50/50,” Channing says as Rob Snyder grunts in agreement. “The Revival itself has fans, and then there’s fans of the songwriters and artists who live in the town and aren’t in the industry. Then there’s people in the industry who their just is to find who’s hot and who’s good, so they come to these things all the time to watch. It’s really a big community here, and everyone likes good songs.”

But The Revival is not just about the songs and Tuesday nights. It’s about trying to make a difference on Music Row.

“We want everyone to feel welcome,” says Rob. “It’s not just a big party, it’s everything before and after the party. And if your heart’s in it, and I mean really in it, then you’re welcome to come play.”

Rob Snyder says his dream scenario is that someday some big artist will walk into Tin Roof, see a songwriter who blows his mind, and say, “That guy right there that doesn’t have a name and nobody knows who he is, I’m going to make a record on him and make him a household name.”

Channing Wilson adds, “What we hope is that somebody that writes ‘the formula’ as we call it, comes out to The Revial and it inspires him to go back to the room Monday morning and write something magical that ends up changing the game because he listened to someone like Adam Hood play, and then he went home and wanted to write a better song.” 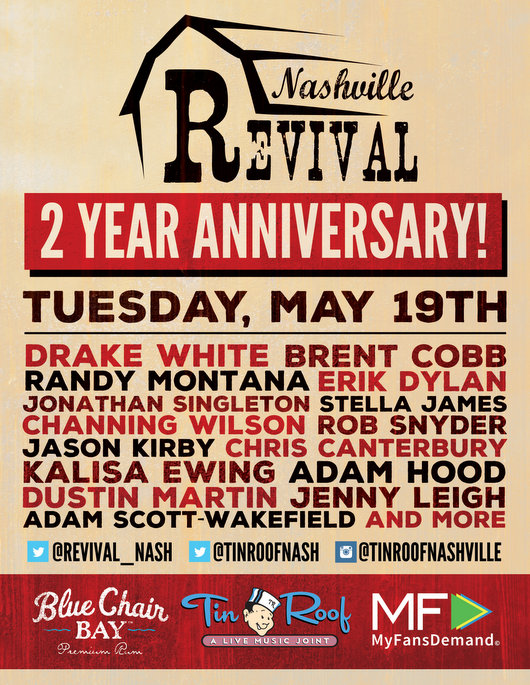