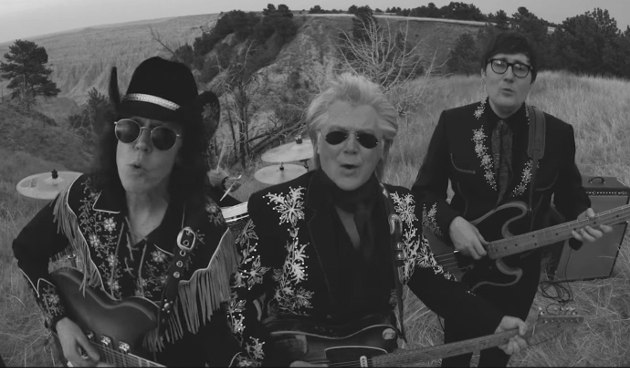 In 1964 when Johnny Cash released his landmark record Bitter Tears, it wasn’t yet fashionable to regard the plight of the Native American, or to record concept records. In fact Bitter Tears is arguably the first concept record in the history of country music, and one of the first in American popular music overall. Composed of songs written by folk singer Peter LaFarge and a few Johnny Cash originals, the centerpiece was of the record was the song “The Ballad of Ira Hays” about one of the soldiers depicted in the iconic “Battle of Iwo Jima” statue. Hayes was a Native American who died in obscurity and poverty.

Fast forward to the mid 80’s when a young guitar player named Marty Stuart joined Johnny Cash’s band after the death of Marty’s mentor, Lester Flatt. Part Choctaw himself, it was a visit to the Pine Ridge Reservation of the Lakota in South Dakota while playing with Cash that had a profound effect on Stuart. After witnessing both the poverty and indomitable spirit of the Lakota people, it began a lifelong friendship with the tribe that still exists to this day.

To the Lakota Tribe in the Black Hills of South Dakota, Marty Stuart is known as O Yate’ o Chee Ya’ka Hopsila or “The man who helps the people.” When Marty married Connie Smith in 1997, it was on the Pine Ridge Reservation. In 2005, Marty Stuart released his own concept record based on the struggle of Native Americans called Badlands: Ballad of the Lakota. Marty Stuart wrote every one of the songs, except a cover of Johnny Cash’s “Big Foot.”

Marvin Helper, a Medicine Man of the Lakota who was a close friend of Marty’s and recently passed away, says of him, “The spirits bring in the name. He will carry that for the rest of his life. The Lakota name that has been given to Marty Stuart is O Yate’ o Chee Ya’ka Hopsila. He is adopted into the Lakota tribe …he is now family.”

Once again Marty Stuart has released a concept record, this time called Way Out West, and one many regard as one of the best country records to be released so far in 2017. For the video of the song “Time Don’t Wait,” Marty returned with his band The Fabulous Superlatives to the Pine Ridge Reservation. Locations in the video include Wounded Knee, the grave of famous Lakota warrior Red Cloud, and other parts of the Pine Ridge area. Cinematographer Reid Long conducted the shoot.

“The results are absolutely exquisite,” Marty Stuart says. “I invite the viewer to come along with me and the Superlatives to Pine Ridge. By way of Reid Long’s camera, we’ll take you deep inside of a world filled with wonderful people, that most people don’t even know exist.”