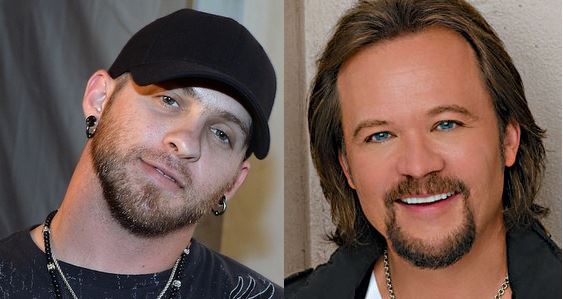 On Saturday night (5-31), Valory Music Group artist Brantley Gilbert headlined the Blue Ridge Music Festival in Salem, Virginia, with Thomas Rhett, ABC Nashville actress and singer Clare Bowen, and Travis Tritt opening for him. Apparently what transpired stimulated Travis Tritt to take to Twitter to question the level of respect he and his fellow openers were treated with, and the respect he and other aging artists are receiving in general. Here are the Tweets in sequential order.

Even though @BrantleyGilbert only gave us 8 feet of stage, we had a great time performing for everyone @BlueRidgeFest tonight. Great crowd! My word of advice to all up and coming performers: Don’t kick anymore asses on your way up than you are willing to kiss on your way down! I’ve always treated my heroes and peers with respect. I’ve respected everyone from George Jones, Waylon and Charlie Daniels who opened.

Then Tritt tended to soften his stance as the tweets continued.

I doubt very seriously if @Brantley Gilbert knows how disrespectful his stage setup is to those who open for him. However, I’m just saying. Regardless of circumstances, I love performing for an appreciative audience. The folks make the show for me. Nobody appreciates y’all more! Make no mistake, @BrantleyGilbert is a fellow Georgia boy. He deserves whatever place he has carved for himself in the biz …. All I’m saying is that his handlers/management should be a little more aware of how he comes off to those he works with. No disrespect. Everyone in this biz knows we can’t please everyone, in spite of our best intentions. However, non of us can fix what we don’t know is wrong.

About an hour later, Tritt added:

Know this. I’ve had openers from Trisha Yearwood, Dixie Chicks, Little Texas, Joe Diffie, Lynyrd Skynyrd & LeRoy Parnell over the years …. And I’ve always personally made sure that they had all the stage space and production that they needed to put on the best show possible.

No response has been seen from Brantley Gilbert, who has not posted a Tweet since May 30th. Gilbert at the moment is promoting his recently released Just As I Am album which has been surprising people with its sales numbers and debuted at #1 in country music.

Tritt’s snipping of Gilbert’s nose (or at least his crew and management’s) is reminiscent of last summer when artists began speaking out like never before about the direction of the genre and the lack of respect for older artists, arguably crowned by Zac Brown who called Luke Bryan’s song “That’s My Kind of Night” the “Worst Song Ever.”

In January, Travis Tritt also had some criticism of the direction of the country music business, telling Peter Cooper of The Tennessean:

There’s a mentality in the country music world of Nashville that says, “You don’t know anything, and we know how to do this.” It’s “We know what’s best for you: You get to the microphone, sing what we tell you to sing, play what we tell you to play, and you’ll be fine.” That scares people away from branching out and doing things that creatively are out of the box.

The music business establishment does not have a crystal ball. They do not know everything that they tell you they know. I’d say to any of the new people coming out, ‘Find the courage to step out and try it your way.’ Otherwise, what we get is a cookie-cutter mentality that isn’t good for artists who are having to portray themselves as something they aren’t, or that are capable of doing so much more but are being stifled.