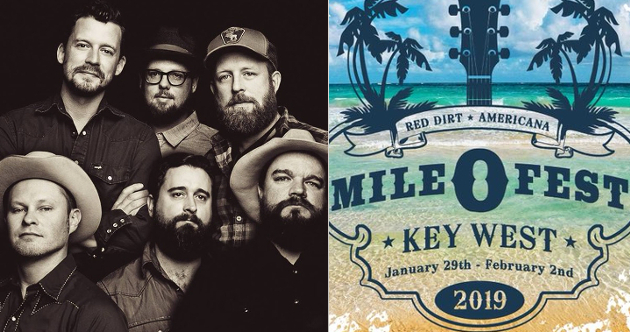 The woes for the Turnpike Troubadours and their fans continue after the band announced Saturday evening (1-26) that they will not be attending the 2019 installment of Mile 0 Fest where they were scheduled to headline on Thursday night, January 31st. This is on top of other cancellations announced Friday afternoon for shows at the Deluxe at Old National Centre in Indianapolis, Indiana on Friday, Jan. 25, The Pageant in St. Louis on Jan. 26th, as well as the makeup show for the date in Chicago scheduled for Jan. 27th. The band is saying the cancellations are due to “unforeseen circumstances.”

Plagued with multiple cancellations of shows in the latter half of 2018, the Turnpike Troubadours had been playing shows without a hitch throughout December, 2018 into January 2019. Then on Thursday night, the band canceled an appearance at the House of Blues in Chicago at 7:50 p.m., which was 20 minutes after doors to the venue opened. Attendees were given free drink tickets before being told the show had been canceled last minute due to frontman Even Felker being unable to make the show because of a delayed plane flight. The official word from the Turnpike Troubadours was, “Due to travel delays, it is with great regret that we need to postpone tonight’s performance at the House of Blues …We apologize for the inconvenience this has caused you.”

Saving Country Music has reached out to the publicist of the Turnpike Troubadours as well as others for clarification on the Chicago cancellation, as well as an explanation for the further cancellations, but has received no response. The Turnpike Troubadours website also went offline on Saturday (1-26), making it even more difficult for fans to confirm which future dates are still live, and which ones have been cancelled.

As for Mile 0 Fest, they have released a statement, and confirmed that American Aquarium—which was scheduled to play right before the Turnpike Troubadours on Thursday night—will be headlining the evening. No word on if another band will be performing at the Truman Waterfront Amphitheater to make up for the vacant spot. Attendees are being told to download the Mile 0 Fest app, which will include all updated schedule changes once they are confirmed.

Due to circumstances beyond Mile 0 Fest’s control The Turnpike Troubadours will not be performing this year. We, just like you, are obviously disappointed in this development, but happy to say that RC & The Ambers will still be performing their show at Cowboy Bill’s Saturday night. We still have over 60 fantastic artists on the line up and are looking forward to a stellar week of great music in paradise. We will be extending the set times of some of your favorite bands on Thursday night. We have no doubt that Thursday Night is going to rock! The whole Mile 0 Fest team will be working hard as always to bring you a one of a kind festival experience. See y’all in paradise.

Songwriter and performer Dalton Domino also announced recently that he will not be attending Mile 0 Fest as scheduled as he seeks treatment for personal issues.

More information on the latest rash of Turnpike Troubadours cancellations when it becomes available.