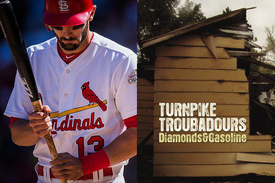 Signs that good, independent country music is beginning to poke through to the public consciousness are all over the place, and during tonight’s MLB All-Star Game, we got yet another big one when St. Louis Cardinals All-Star second baseman Matt Carpenter chose the Turnpike Troubadours‘ song “Long Hot Summer Day” from their album Diamonds & Gasoline for the walk-up music during his plate appearance.

Originally written and performed by bluegrass great John Hartford, Carpenter started using the Troubadours version in 2012, but this is the first time it has had a chance to be showcased on such a grand stage. And apparently the fandom is mutual, with the Troubadours throwing their support behind Carpenter. It probably helps that Carpenter happens to play for the team closest to the Troubadour’s native Oklahoma, and that Matt grew up in Sugar Land, TX and went to school at TCU in Ft. Worth—a Turnpike Troubadour stronghold if there ever was one.

Matt Carpeneter and The Troubadours have communicated their mutual respect back and forth on Twitter over the last year or so since Carpenter began using the song. 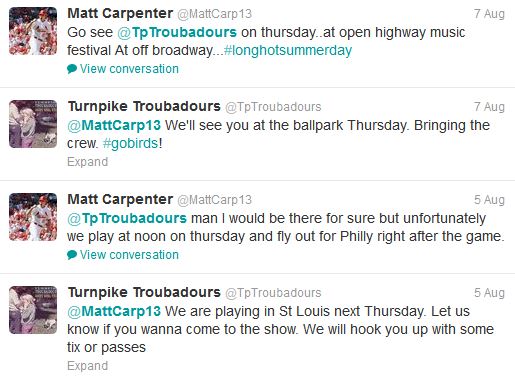 The Turnpike Troubadours have seen a steady rising action over the past few years from their heartfelt songwriting and infectious tunes. They are quickly becoming one of the biggest names in Texas/Red Dirt music and threatening to break out nationwide. Their last album Goodbye Normal Street made many people’s lists as one of the best of 2012 in country music.

Matt Carpenter walking up to “Long Hot Summer Day” in a game from last week: