Trigger Down with Pop Country 88 Comments

Like a cabal of menacing dark princes rendezvousing in a desert hideout, devoid of any and all compassion and decency as they mastermind a plot to inflict the widest possible psychological toll upon the masses with their incendiary terroristic horror, three semi-successful pop rock washouts refugeed from the implosion of the rock format have conjoined to cobble together whatever is left of their twilighting relevancy and disappearing talent reserves to attempt to prop up their spendthrift lifestyles by releasing the most calamitous and formulaic audio pap to ever be exposed to the human species. Lock your doors and clench your loved ones a little closer: this is the dawning of the unholy triumvirate known as Uncle Ezra Ray. 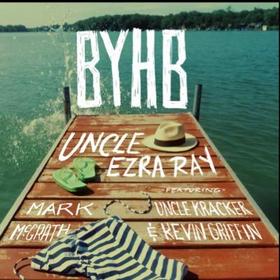 If there was ever a day, ever a moment in history that the whole of humanity could come together regardless of religion or creed and find uncompromised consensus behind Stephen Hawking’s assessment that “There is no God,” it would be the day Uncle Ezra Ray came into being.

You can combine all three men’s musical histories together, and most Millennials still wouldn’t know who the fuck these 40-something posers are. But with Mark McGrath’s frosted tips, Kevin Griffin’s co-write of Sugarland’s embarrassing song “Stuck Like Glue,” and Uncle Cracker’s guilty plea for assaulting a woman, these shallow misogynist carpetbaggers should slip right into the dubious ranks of Bro-Country slime balls just dandy.

I’ve lost count of how many times I’ve declared a country song the worst ever, but what I can assure you is there has never been more of a “paint by number” effort than this dumpster fire of a summer tune. From the conspicuous pandering of the repetitive “Hey Hey” and “What What” lines, to the terrible white boy rapping, to the egregious ripping off of the “La di da di we likes to party” phrasing, and just the incredible liberties taken for what is supposed to be country music, even Luke Bryan and Florida Georgia Line must be looking sideways at this thing, wondering if this Bro-Country bit has done got out of hand and if Uncle Ezra Ray will spoil the party for everyone by going so completely out-of-bounds.

And don’t fool yourself into thinking, “Oh, this boutique side project won’t get past the county fair circuit before these guys contract carcinomas from their spray tans or get taken down by an army of baby mama’s demanding alimony.” We could only be so lucky, but this mortifying song is already spreading on SiriusXM’s pop country station The Highway like an aggressive and puss-oozing venereal rash destined to repopulate to pestilence levels during the steamy months of summer similar to the shitastic Bro-Country über odes that have shamed country music in past seasons.

How do you think Florida Georgia Line and “Cruise” got their starts? Or Chase Rice, Cole Swindell, or Sam Hunt’s “Leave the Night On”? They all started when SiriusXM’s John Marks shepherded them onto The Highway‘s rotation, and the rest was tarnished history.

Moreover, the presence of Uncle Ezra Ray and “B.Y.H.B.” on the country scene once again illustrates the serious lack of gatekeepers and leadership in the country genre. If these cock rock castoffs can construe themselves a super hit while hundreds, possibly thousands of country music hopefuls with ten times the talent slave away in clubs and honky tonks trying to earn their shot, then what the hell does it say about country music as a genre?

Uncle Ezra Ray and “B.Y.H.B.” should be publicly laughed at, shunned, lampooned, rebuked, parodied, and told to take their big bag of nothing back to the teenie bopper clubs of Newport Beach. But instead “B.Y.H.B.” is probably a few choice spins on the Bobby Bones Show away from being awarded Single of the Year by the CMA.

May country music Jesus make the penises of all three of these men fall off for perpetrating such an atrocity on country music.