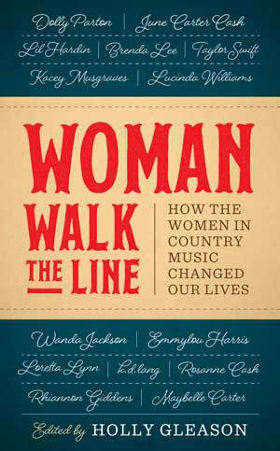 With the effort to tell the story of country music from the female perspective, the Texas University Press will release a new book called Woman Walk the Line: Women Writers on the Female Country Artists Who Marked Their Soul in September, 2017. Part of the American Music Series from UT Press, the 236-page book will be the first in the series to not focus on an individual in biography form, and instead will be a collection of essays from multiple artists compiled and edited by country music journalist and critic Holly Gleason.

“‘Woman Walk the Line’ came about because it feels like we’re not just in danger of losing the story of so many incredible artists, especially the women, but that deeper sense of what music can truly to mean to someone in their life,” says Holly Gleason. “The way this music and these women are written about says so much about the way music marks our lives, shapes our journey or keeps us safe in rugged times. It’s women of varying ages all writing about how music touched and changed their lives — part witness, part love letter, a bit of music criticism, a little history and a whole lot of heart. It’s more than what they wore or who they dated, as today’s reductionist media makes it. And that’s where the marrow of these essays begins.”