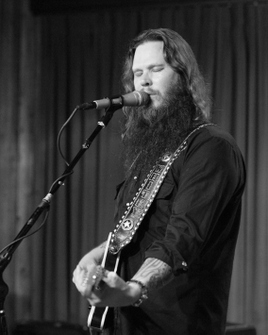 Fans of the hard driving, honky tonkin’ throwback country band of the new generation known as Whitey Morgan & the 78’s have been waiting a very long time to hear something new since the release of their self-titled Bloodshot Records debut in 2010, and the floodgates are about to open, beginning with the long-awaited release of Born, Raised & LIVE from Flint, a live album recorded at The Machine Shop in Whitey’s hometown of Flint, Michigan on November 25th, 2011. It will be released on December 2nd by Bloodshot.

The album finds Whitey & Co. reprising many of their signature original songs and timeless covers, including “Turn Up The Bottle,” “Buick City,” Johnny Paycheck’s “Stay Away From That Cocaine Train,” Bruce Springsteen’s “I’m On Fire,” and Dale Watson’s ‘Where Do You Want It?” (listen exclusively below).

“Twenty minutes outside of any city in Michigan could be northern Alabama,” Whitey told Saving Country Music in an interview about his hometown of Flint. “In the 70”²s when my grandpa was playing music in Flint, almost a quarter of the population were transplants from the South that came to work at the factories. When you have a quarter of the population, and they start having babies, what you have is this Southern culture that is ingrained in them, even though some of them have never even been there. Like me when I was growing up, the things we ate, certain words that you said were Southern. To me it was normal. To my friends that were really Yankee’s, it was weird. They didn’t eat fried bologna sandwiches and drink sweet tea and listen to gospel and bluegrass on Sundays at their grandpa’s house. Any of the Southern food, that’s what my grandma’s house smelled like any time I went in there. My grandpa demanded that stuff.”

“I think it’s a rebellious type thing, because we come from a place that’s not known for that kind of music,” Whitey continues. “But the place that is known for that type of music isn’t fucking doing it. What can I do to not only feel real about what I’m doing, but also get some attention? And maybe knock down some doors and let people know there something wrong with the mainstream right now. There’s volumes and volumes of great music that nobody seems to give a shit about anymore.”

The blue collar, hard working, and hard living mentality of Whitey Morgan and the City of Flint is deeply etched in the 13 tracks of Born, Raised & LIVE from Flint, and so is the energy of a live Whitey Morgan show that fans will attest is one of the best and most authentic honky tonk experiences still out there. Playing upwards of 300 live shows a year has made Whitey Morgan & the 78’s one hell of a tight band.

Included on the new live record is one of Whitey’s best-known songs, “Where Do You Want It?” written by Dale Watson about the incident in 2007 when Billy Joe Shaver shot a man in the face at Papa Joe’s just south of Waco. Shaver was later released of charges when the shooting was found to be in self-defense, but the story and the song still live in infamy.

Fans of Whitey Morgan can expect even more music coming soon. Rumors have an acoustic album Whitey recorded recently being readied for release, as well as another full studio album just sent to mastering in the offing. “The plan is just to record as much as we can over the next few years,” Whitey told SCM in February. “Even if it’s not albums, put out a 7-inch here and there, digitally release two songs. Just keep it going. Never a six month stretch without new songs.”

Born, Raised & LIVE from Flint will also be released on vinyl, including a limited-edition white vinyl (for Whitey) that is currently available for pre-order.