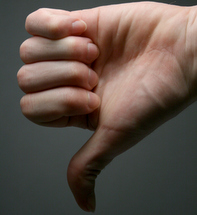 Invariably this is the question brought up when Saving Country Music or any website or publication chooses to don its poison pen and stick it in the eye of a ne’er-do-well assaulting our eardrums with ghastly tripe. Many chide, “Why can’t we just focus on the good stuff?” Never mind that the web traffic to articles that are negative in nature tend to outpace the positive ones 3 to 1. It’s simply not as popular to come out and say, “Really? Another album review from a band I’ve never heard of that really needs the exposure?” then it is to act like you’re above the adolescent trouncing of terrible music (though you’ll still read), or that the constructive criticism of music presented in a professional manner is important.

To Hold Feet to the Fire

Even if the fist wringing and gnashing of teeth does absolutely nothing to actuate any specific change in the music world, at least it builds an archive and registers the dissent so it can later be referenced to let future generations know that musical ideals were not allowed to be trounced quietly.

Aside from the quippy, negative sentiments presented in a satirical manner, professional criticism is something every artist should crave, and helps maintain a healthy music environment that invites discussion on quality. Criticism can also be an important tool to the music listener, especially as the music world becomes evermore crowded with choice.

The expression of viewpoints, frustrations, and sometimes anger is necessary to help keep us balanced. Sometimes the best way to stop thinking about something, or to quench anger about something is to express our feelings about it. It also helps build community, and an exchange of viewpoints and ideas throughout that community to help solve some of the problems that led to the negative sentiments to begin with.

Bashing bad country is an important part of the flora and fauna that makes a site like Saving Country Music function properly. This site was started with the idea that there was a whole population of people perplexed and embarrassed about the direction of country music—that it might even be a majority sentiment amongst the music-buying public—but that there wasn’t a place proselytizing this view on a regular basis, and so there was no way to build strength through uniting this consensus.

But how would people find it?

2/3’rds of the traffic that comes to Saving Country Music every day are people who have never been to this site before, but instead are taking to Google or other search engines, and imputing “country music sucks these days” or “what happened to country?” or “Brantley Gilbert is a douche” into their search window. And lo and behold it leads them here where Saving Country Music is waiting with open arms, inviting them into the fold, introducing them to a new group of like-minded friends, and a whole world of independent music feverishly looking for fresh ears to help support it. The mainstream music industry has radio and television to reach the public’s eyes and ears. On the internet, the playing field can be leveled.

But there still must be balance and focus. From the beginning, Saving Country Music for example has held to a standard that for every negative article, there must be at least two positive ones, and has maintained that balance over the years to the point where the average ratio is closer to 3 or 4 to 1, positive to negative. That balance must be maintained, or the focus could become simply generating traffic to the site as opposed to promoting good music.

But the reader also has a responsibility. Positive, quality music coverage is drying up all over the internet, and it’s not from the willingness of music journalists to write positive stories— journalists who many times got into the practice from their sincere love of music. It’s because readers are no longer interacting as much with positive media. The case can be made that music journalism of any type might not be as necessary as it was years ago with the type of access listeners now have to music. But is it fair to then turn around and criticize the journalists and bloggers who are simply trying to help their readers navigate a marketplace that is more crowded than it has ever been?

If readers want more positive stories, then they must interact more with positive stories, just as they do with the negative ones at a much greater rate. Studies show that readers are so inundated with information these days, if there is something that a reader truly doesn’t want to see, then they physically don’t see it. Their eyes simply gloss over it and they are on to the next bit of information in their news feed. And so if you don’t want to see negative music coverage, choose to not see it and instead seek out the positive coverage that is withering on the vine from a lack of interest.

Saving Country Music, and many other music journalists and critics are committed to trying to keep the focus more positive. But the reader has to be committed to it as well. Because as time moves forward, and more and more music enters the marketplace and easier access to that music is afforded to the listener, it will be imperative for all of us as music fans to have access to tools and voices to help find us the music that speaks to us most personally and has the biggest impact on our lives.