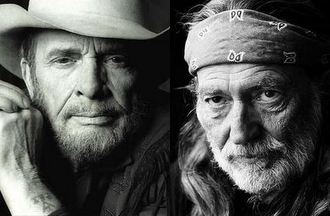 Willie Nelson and Merle Haggard are pairing up once again. This was the one nugget of important information squeezed between pot jokes when Willie Nelson made an appearance on Jimmy Kimmel Live on Friday evening (3-21) as part of South by Southwest (SXSW) festivities in Austin, TX. It won’t be the first time the two country music legends have released an album together, and it may not be the last.

Willie and Merle most famously paired up when they released the album Pancho & Lefty in 1983. The title track written by Townes Van Zandt became a #1 hit, and so did the album. The duo released another album together in 1987 called Seashores of Old Mexico, and were joined by Ray Price for the 2007 album Last of the Breed. 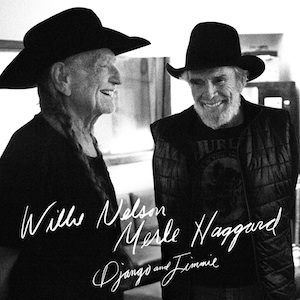 The title Django & Jimmie refers to Willie Nelson’s Belgium-born and French-residing guitar playing muse Django Reinhardt, and Merle Haggard’s hero of Jimmie Rodgers. Willie says the tone of his famous guitar Trigger was inspired by Django, and Willie has recorded Django’s “Nuages” many times throughout his career, including on his last album December Day. Haggard famously released a Jimmie Rodgers tribute Same Train, A Different Time in 1969.

But the lead single from the album sounds like it was inspired by something much different than Django or Jimmie. Willie sang a few verses of “It’s All Going To Pot” to Jimmy Kimmel, and told the crowd it will be released appropriately on 4/20.

“It’s all going to pot, whether we like it or not. As far as I can tell the world’s gone to hell, and we’re sure gonna miss it a lot. All of the whiskey in Lynchburg, TN just couldn’t hit the spot. I’ve got $100 bill you can keep them pills friend ’cause it’s all going to pot.”

Merle also talked about the album recently, saying, “The most interesting thing, probably, is that me and Willie just finished our third album together. Not counting the thing we did with Ray Price. It’s really good; I think it’s the best one we’ve done. I think the title of the album is probably going to be Django & Jimmie, about Django Reinhardt and Jimmie Rodgers. We didn’t really do any swing, per se, we just did straight-ahead songs that we felt good about.”

Since 2011 and before, an album has been rumored to be in the works involving Willie Nelson, Merle Haggard, and Kris Kristofferson in a project called The Musketeers. Merle first made reference to it in early 2011, and then all three of the men acknowledged the project before the Grammy Awards in 2014 where they performed together with Blake Shelton. It was also revealed around the time that Kris Kristofferson was beginning to experience memory issues.

Willie & Merle are also getting set to play a series of three sold out shows at the Whitewater Amphitheater in New Braunfels, TX on March 26th, 27th, and 28th.

The release date for Django & Jimmie is June 2nd.