While east Nashville Americana stars release bad-sounding, tacky albums on purpose under the flawed logic that this is how all the old greats did it, gluing together shallow observances about the music that miss on both texture and substance while they focus more on their vintage dud collection and Instagram accounts, a guy you’ve never heard of named Zephaniah OHora from New York City has just released one of the most lush, vibrant-sounding, well-produced and recorded albums of classic country music I have ever heard in this era or any other, and backs it up with superb songs, perfect instrumentation from his band The 18 Wheelers to fit the mood and style, and an overall dazzling listening experience that reminds you why you decided to become such an obsessed music fan you would spend the time to read someone’s opinion of albums on the godforsaken internet.

Zephanaiah OHora’s This Highway just very well might be a modern classic country masterpiece. Okay, it could have used a couple of quicker-paced songs to keep the energy flowing, or a little more spice to separate the tracks from each other. But otherwise, it’s flawless for what it is, which is a reawakening of everything brilliant and beautiful about the Countrypolitan era of country music, while leaving all the superfluousness of strings and choruses and other overproduction aside. In fact in a strange way, Zephaniah OHora, some 60 years after the original Countrypolitan era, has represented the essence and spirit of what made that era so great even better than some of the original artists and albums that helped define that epoch of American country music.

Enough can’t be said just about the way this album sounds, and how the songs are constructed. If nothing else, producers Jim Campilongo and Luca Benedetti deserve incredible accolade for capturing such warmth and body in the recording process, with the perfect amount of reverb to make the music sound vibrant, not just vintage, rewarding the listener with all the benefits of analog tape recording, but none of the constraints or trappings of it. So many try, sometimes valiantly, to get this process right, and regularly fail, feeling like as long as a reel to reel is involved, everything else will fall into place when sometimes even digital would be better due to a novice understanding of the medium. As the primary guitar player on the album, Jim Camilongo also did an excellent job interpreting the tones and modes of the Countrypolitan era through the lead licks. 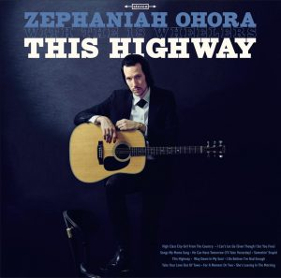 But only audiophiles pull up albums to hear the quality of recordings that most listeners find too nuanced to enjoy. Ultimately it must be the songs and performances to carry the day, and This Highway scores very high marks on these pursuits as well. The challenge of all traditional and classic country music made in the modern context is how to make it appeal to the present day mindset, while still minding the stylings both sonically and lyrically of the past era you wish to evoke. It is true that country music must evolve to stay relevant. But if someone can work within the restrictive parameters of a specific era and allow all the hearkening and nostalgia to bolster the experience while still telling stories and touching themes that very much appeal to the modern heart, this is both a daunting, and enthralling creative enterprise worthy of praise if pulled off as well as Zephaniah does. It’s no different than an effort that relies on innovation to create musical intrigue when regarding the music on a creative scale.

It doesn’t matter if it’s 1957 or 2017, the human heart still breaks down the same lines, we all yearn for freedom when we feel constricted, and we all search for comfort when we’re alone. Zephaniah’s “Songs My Mama Sang” feels like something from the 60’s, yet it’s so real and relevant to today like so many of the songs from This Highway. Zephaniah wrote every song on this record except the stirring “Something Stupid” guested by Dori Freeman, and even includes a murder ballad in “I Can’t Le Go (Even Though I Set You Free).”

And don’t let me hear a peep about how some slicked back guy from the Big Apple is incapable of singing country music. Just listen to This Highway, and that perception is immediately discredited. One of the great things about Zephaniah is that you get the sense he knows who he is, and where he is from. At no point on this record does he attempt to inflect a Southern accent to the vocals, or pen a Southern perspective that would be imperceptible to his personal life experience. And if he did, it might have been a deal killer on the entire project, despite all of the other positive attributes because of the erosion of authenticity.

There is a little bit of New York City peppered into the narrative here. This feels very much like New York City country. The term “Countrypolitan” came from the contemporization of country music to appeal to country people who had moved to the city during the 50’s and 60’s for work and prosperity. Where do you think the themes of “Detroit City,” “Old Home Place,” and “Streets of Baltimore” came from? OHora puts his own stamp on it on this timeless theme with songs like “High Class City Girl From The Country.” Country music may not be authentic to New York City, but This Highway is authentic to Zephaniah OHora, and his experience as a classic country music fan living in the city. Is it only a matter of time before he goes all Daniel Romano on us and starts donning Adidas fashion and swearing off country fans as simpletons? Perhaps, but this won’t erode the quality of this effort an iota, just as it hasn’t those classic Romano records which still hold up, even though OHoroa has bested Daniel Romano many modern-made classic country projects with this effort.

If you want a good excuse to disregard Zephaniah OHora and This Highway, I offer my sincerest apologies. It is still eclectic to take this type of vintage approach to country music, and it won’t put Zephaniah on the Sturgill Simpson trajectory to superstardom. But for what it is and how it’s presented, This Highway leans heavily towards perfection.