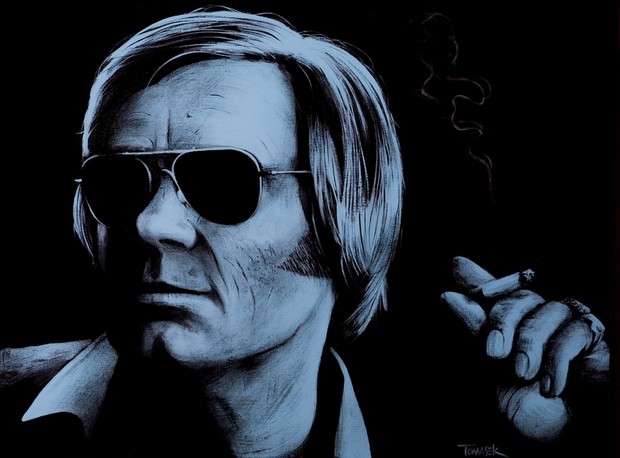 George Jones. The Possum. Possibly the man whose life and story embody the themes of a country song better than anyone. From rags to riches, back to rags, and eventually onto rehabilitation and redemption, George Jones was a man that faced demons more fierce than any of us can imagine, and eventually came out on top. Was he a badass? You bet, and here’s 10 reasons why.

Before George and Tammy were married, George went over to Tammy’s house one night to have dinner with her and her then husband, songwriter Don Chapel. George knew Tammy through their mutual booking agent. While fixing dinner, Tammy and Don Chapel got in a heated argument, resulting on Don calling Tammy a “son of a bitch” in front of George. George, secretly hiding his admiration with Tammy, lost it.

“I felt rage fly all over me,” Jones said in his autobiography. “I jumped from my chair, put my hands under the dinner table, and flipped it over. Dishes, utensils, and glasses flew in all directions. Don’s and Tammy’s eyes got about as big as the flying dinner plates.”

George professed his love for Tammy right then and there, and the country music couple were soon married.

2. Helping To Found ACE — The Association of Country Entertainers

George Jones was never considered an Outlaw, but he participated in one of the most significant precursors to country music’s Outlaw revolution in the mid 70’s. Some know the story of Charlie Rich burning the envelope announcing John Denver as Entertainer of the Year at the CMA’s in 1975, but it was the year prior when the stink had begun about performers outside of the country genre walking away with the industry’s accolades. Olivia Newton-John’s win in 1974 for Female Vocalist of the Year caused such a stir that traditional and even pop-leaning country performers at the time organized behind the acronym “ACE” that stood for “Association of Country Entertainers”.

Spearheading ACE was George Jones and then wife Tammy Wynette, and the inaugural meeting of ACE was held at their Tennessee residence. Other participants in ACE included Dolly Parton, Bill Anderson, Porter Wagoner, Faron Young, Conway Twitty, Hank Snow, Mel Tillis, Barbara Mandrell and more than a dozen others. ACE demanded more representation of traditional artists on the CMA’s Board of Directors, and more balance on country radio playlists (does any of this sound familiar?).

Just how successful ACE was can be argued, but it was the precursor to future organizations looking to restore balance and better representation from the CMA, and helped usher in country music’s Outlaw movement and the return to a more traditional sound that the mid 70’s saw in country.

3. Riding a Lawnmower to the Liquor Store 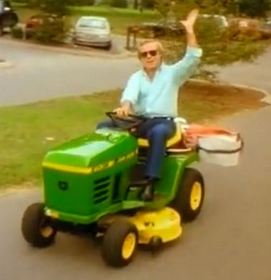 This is probably the most notorious George Jones story, but what a lot of folks don’t know is that George Jones chose this slow-moving mode of transportation to procure alcohol more than once.

The first and most well-documented lawnmower incident was the late 60”²s. George Jones was living 8 miles outside of Beaumont, TX with his then wife Shirley Ann Corley. Jones had experienced a few #1 hits by that time, and his success fueled his wayward ways with alcohol. He was drinking so bad, his wife Shirley resorted to hiding all the keys to the vehicles before she would leave the house so George wouldn’t drive to the nearest liquor store in Beaumont.

But that didn’t stop him. After tearing the house apart looking for a set of keys one time, George looked out the window to see a riding lawnmower sitting on the property under the glow of a security light. “There, gleaming in the glow, was that ten-horsepower rotary engine under a seat. A key glistening in the ignition,” George recalled in his autobiography. “I imagine the top speed for that old mower was five miles per hour. It might have taken an hour and a half or more for me to get to the liquor store, but get there I did.”

The second, lesser-known incident of George Jones’s escapades on a riding lawnmower happened when he was married to Tammy Wynette. Taking a cue from George’s previous wife Shirley, Tammy hid all the keys from George, but George had been down that road before. Wynette woke up one night at 1 AM to find George missing. “I got into the car and drove to the nearest bar 10 miles away,” Tammy recounted in 1979. “When I pulled into the parking lot there sat our rider-mower right by the entrance. He’d driven that mower right down a main highway. He looked up and saw me and said, `Well, fellas, here she is now. My little wife, I told you she’d come after me.’”

The George Jones lawnmower incidents later went on to be memorialized in many country videos, including Hank Williams Jr.’s “All My Rowdy Friends Are Coming Over Tonight,” Vince Gill’s 1993 hit “One More Last Chance”  that includes the line, “She might have took my car keys, but she forgot about my old John Deere,” and John Rich’s “Country Done Come to Town,” and George’s own “Honky Tonk Song.”

4. Recording “He Stopped Loving Her Today”

Yes, it could be easy to highlight George’s signature song and say it was awesome for him to cut it, but the story behind “He Stopped Loving Her Today” goes much deeper. The song not only saved George’s career, it potentially saved his life, and all of this is from a song that at first he didn’t want to record because he thought it was too depressing, too long, and nobody would play it. It eventually became his first #1 in six years, salvaged his career, introduced him to a new generation of fans, and solidified his place as one of country music’s biggest ever superstars. Jones himself says about it, “A four-decade career had been salvaged by a three-minute song.”

Written by Country Music Hall of Famer Bobby Braddock (who you can argue would not be a Hall of Famer if it weren’t for the song), along with Curly Putnam, “He Stopped Loving Her Today” went on to spend 18 weeks at #1, won the Grammy for Best Male Country Performance in 1980, both the ACM for Single and Song of the Year, and was the Song of the Year from the CMA’s for 1980 and 1981. After George’s death, the song re-entered the charts at #21. “He Stopped Loving Her Today” deserves to be in that elite class of songs that can be argued are the greatest country music songs of all time.

5. Being The Best Male Duet Partner in the History of Country Music

When you have the best voice in country music, your services as a duet partner are going to be called on early and often. And despite George’s body of solo work being worthy of a Hall of Fame career, his work as a duet partner is unparallelled itself. Country music stars young and old, male and female lined up to take advantage of his voice over many decades, and duets accounted for five of the fourteen #1 hits George had over his storied career. Here’s a rundown of just some of the people George performed duets with over the years:

6. Walking out of the CMA Awards

Ahead of the 1999 CMA Awards, George Jones was enjoying yet another resurgence in his career. Jones was slated to perform the song “Choices” on the CMA’s, but when producers insisted he must sing an abbreviated version, he walked out of the ceremonies and boycotted the show.

In a super act of class and solidarity, Alan Jackson halfway through his performance of “Pop A Top,” stopped down and shifted gears to perform “Choices” in protest. The event has gone on to be considered one of the biggest moments of country protest in the history of the genre.

Throughout his career, George Jones held fast to the ideals of traditional country music, and wasn’t afraid to fight for them, or speak out about what was happening in the genre. And as one of the few artists who registered hits in multiple decades (according to Billboard, Jones had more “hits” than any other country artist), when George Jones spoke, people listened.

George’s song “Who’s Gonna Fill Their Shoes” comes from the 1985 album of the same name, and was written by Troy Seals and Max D. Barnes. It’s a poignant tribute to the history of country music and its previous greats, while calling attention to the abandonment of country’s roots. The song was so potent, the phrase “Who’s Gonna Fill Their Shoes?” has become one of the most popular go-to colloquialisms concerning the state of country. The song was also a hit, rising to #3 on the Billboard country chart in 1985.

Some people assume that becoming a rich celebrity solves many of your problems, when for many artists it exposes and fuels their problems. Such was the case for George Jones, who had major issues with alcohol, and later in his career, drugs. At one point in 1979, despite being one of the best-selling artists in the history of country music, he was bankrupt and destitute, living in his car, weighing around 100 pounds and living off of junk food. George spent time in mental institutions tied to his drinking multiple times and had to be straighjacketed on numerous occasions. He became known as “No Show Jones” because he missed so many engagements over his career.

But in many ways George Jone’s bad behavior only helped his reputation. His fans didn’t turn on him, they loved him more because they could relate to him and their own personal struggles, and because he was such a great artist and performer when he would show. Alan Jackson once said about Jones, “…what I like most about George is that when you meet him, he is like some ole guy that works down at the gas station…even though he’s a legend!”

Waylon Jennings and others first helped get George Jones sober in the early 80’s, and the result was a resurgence in his career. However later in life George Jones would fall back into his old habits. George gave up drinking and drugs for good in 1999 after wrecking his car and spending two weeks in the hospital. After the crash he pleaded guilty to drunk driving charges. Jones told Billboard later, “…when I had that wreck I made up my mind, it put the fear of God in me. No more smoking, no more drinking. I didn’t have to have no help, I made up my mind to quit. I don’t crave it.”

Some artists perform because they want to, others perform because they have to. In March of 2012, George Jones was hospitalized with an upper respiratory infection. The 80-year-old performer was having trouble breathing, and it was thought that he didn’t have much more time before his lungs would fail him. Instead of heading home to recuperate and potentially prolong his life, George set to planning a 60-date farewell tour, culminating in a star-studded event set to transpire at Nashville’s Bridgestone Arena in November of 2013 with over 50 special performers.

According to George’s wife, before he even left on the tour, he knew he would not make it to the finale. Doctors said he was in no condition to perform or tour, but he did anyway. On April 18th, 2013 George Jones was hospitalized in Nashville, missing tour dates in Alabama and Salem. He eventually passed away on April 26th, 2013 at the age of 81.

10. Having The Greatest Male Voice in the History of Country Music