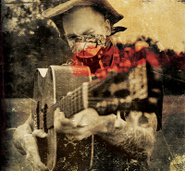 The grandson of Hank Williams and the son of Hank Jr. falls in line with the other country artists covered in Saving Country Music “10 Badass Moments” series by being a rough and tumble character both on and off the stage, but also in showing great character by giving back and using his famous name for good.

1. Playing Charity Concerts for Homes For Our Troops

When you heard that The Marines had been called to the Hank3 concert at The Meridian in Houston, TX in March of 2010, you could only expect the worst. After all, the son of Hank has been known to throw some pretty rowdy shows. But the occasion that called for a military dispatch including a Marine Color Guard was not an unruly crowd. It was meant to honor Hank3 for donating all the proceeds from the concert to the charity Homes For Our Troops that provides housing to wounded veterans. And this wouldn’t be the last time. Hank3 has also done other charity shows for Homes For Our Troops, as well as animal rescue organizations (see below).

2. Playing For 5 Straight Hours at The Valarium in Knoxville

Hank3 is known for his long, sometimes 3-hour+ shows with only a 5 to 10 minute break between his country and his punk/metal lineups, but this particular set was one for the record books.

Exactly what happened at The Valarium in Knoxville, TN on July 15th, 2009 that stimulated Hank3’s marathon, 5-hour set depends on who you talk to. But when Hank’s manager, assistant manager, and five other people were arrested for “disorderly conduct,” Hank3 felt the best way to protest the injustice was by playing one of the longest sets in the history of country music. Without any break, Hank3 held forth with his “Damn Band” staring at 10:00 PM Wednesday night, and the music didn’t stop until almost 3 AM Thursday morning. When Hank3 ran out of material with his band, he switched to an acoustic show and kept on going.

The show went so long, an after party at the adjacent Cider House featuring the local band J.C. and the Dirty Smokers didn’t start until 2 AM, and nobody was there. “Basically, I said, ‘Since we’re already set up and already have a stage, we might as well work on a couple of originals,” Dirty Smokers frontman J.C. Haun said at the time. “So we ended up having a rehearsal, basically.”

And as if Hank3 hadn’t already done enough, he called Valarium owner Gary Mitchell after the show to apologize for not playing the Assjack metal portion of the show. “He felt like he’d stiffed his hardcore fans,” Mitchell told the Metro Pulse.

For years Hank3 has been playing charity concerts to benefit animal shelters in his home of middle Tennessee. “We are thrilled that Hank3 would support our mission,” says Kat Hitchcock, who has worked with numerous animal shelters in the area. “He doesn’t just support it, he lives it. He is a genuine advocate for animal welfare. We are extremely fortunate. We can’t thank him enough.”

The 4th show Hank3 played to benefit Happy Tails Humane in Franklin, TN was on August 3rd, 2012 at the Marathon Music Works in Nashville, and raised a whopping $18,000 for the organization. A DVD was also made of the event, and you can watch the entire footage of the concert below:

Beyond throwing benefit concerts over the years for animal rescue, Hank3 has been known to pull his tour bus over to check on stray animals, and take them in if the proper owner can’t be found, or use his famous name to help find the furry friends a new home. Hank3 goes beyond the call for animals, and over the years it has become his pet issue (arf arf). Check out this PSA he made a couple of years back.

Hank3”²s entire 14-year career with Curb Records was filled with turmoil. The first major conflict arose over an album called This Ain’t Country. Hank3 turned it into Curb, just to have Mike Curb deem it was not fit for release. Curb shelved the album, and then released it after Shelton left the label and after he’d fulfilled his contractual obligation for the number of releases. It was a way for Curb to squeeze another album out of Hank3”²s contract.

Hank3”²s 3rd album Thrown Out of the Bar was slated to be released in late 2004, but Curb refused to issue it. This prompted Hank3 to start a “Fuck Curb” campaign that included T-Shirts, stickers, and the words “Fuck Curb” written prominently on Hank3”²s guitar. Hank3 also took Curb to court, and like so many other artists with Mike Curb grievances, the court found in favor of Hank3 and made Curb issue the album that was later reworked into the album Straight to Hell. Curb also delayed the release of Hank3”²s 4th album Damn Right, Rebel Proud for undetermined reasons, and since Hank had signed a non-defamation clause to his contract to get Straight to Hell released, he couldn’t even speak out against Curb’s actions.

At the time Hank3 was seen as a foul-mouthed yob. But since then, public issues arising with Curb Records and many of its artists, especially Tim McGraw, shows that Hank3 was ahead of his time, and that his salty language was warranted.

6. Including Three Songs by Wayne “The Train” Hancock On His First Record

On Hank3’s first solo record Risin’ Outlaw from 1999, he included 3 songs from one of his early mentors and heroes, Texas singer-songwriter and the King of Juke Joint Swing, Wayne “The Train” Hancock. By including “87 Southbound,” “Thunderstorms & Neon Signs,” and “Why Don’t You Leave Me Alone,” it introduced Wayne Hancock to a whole new generation, and a whole new segment of fans. It also would help Wayne with what songwriters call “mailbox money”—royalties from song credits—for years to come.

In his song “Not Everybody Likes Us” from the album Straight to Hell, Hank3 calls out Kid Rock, saying:

And just so you know, so it’s set in stone, Kid Rock don’t come from where I come from.
Yeah it’s true he’s a Yank, he ain’t no son of Hank, and if you though so goddamn you’re fuckin’ dumb.

The anger was stimulated when Hank3’s father, Hank William Jr., began to refer to Kid Rock as his “Rebel Son” around 2002. At the time, Kid Rock and Hank Jr. were collaborating together on music. The “Rebel Son” talk stimulated rumors that Kid Rock truly was another son of Hank Jr., and Hank3 got tired of answering the rumors. It all boiled over one night at a show in Kid Rock’s home of Detroit when Kid Rock and his fling at the time Pamela Anderson tried to board Hank3’s bus to patch things up between Hank3 and Hank Jr.

…he kept trying to come on the bus—you know, him and Pam [Anderson] and all that shit —and I said, “Tell that motherfucker I got nothing to say to him,” and then he finally gets his way back in there and tells me how I need to be treating my father and I’m like, “All right, you just crossed the line motherfucker.” And I don’t know how many times I have to say it: “No, he’s not my fucking brother… 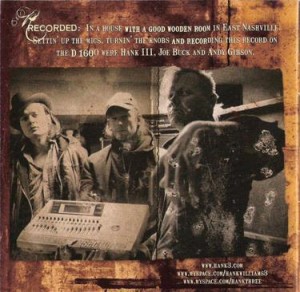 Considered Hank3’s opus, Straight to Hell released in February of 2006 was recorded on a $400 consumer-grade Korg D-1600 machine in Hank3’s steel guitar player’s house. It was the first true DIY recording made outside of the conventional studio setting to ever be released through a country music major label and the Country Music Association. It was also the first album to be put out through the CMA with a Parental Advisory sticker.

The point was not just for Hank3 to gain control of his own music, but to inspire a generation of new artists to do the same thing, to see that they didn’t need to sign big deals and have lots of money to make and release music. And that’s exactly what it did.

9. Standing Up to the Grand Ole Opry 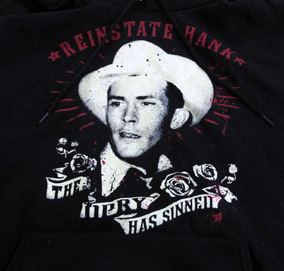 For years Hank3 has been trying to get The Grand Ole Opry to show respects to his grandfather by reinstating him into the institution he loved so dearly. Hank Williams was kicked out of the Opry for drunkenness and missing rehearsals with the idea that once he sobered up, he could be reinstated. Unfortunately Hank Williams never got that opportunity. He died on New Years Day, 1953 as an ostracized member of the institution he helped bring to prominence.  All Hank3 is asking is a symbolic gesture be made to the legacy of Hank Williams by reinstating him to the Grand Ole Opry, also known as Reinstate Hank. The issue has also come to symbolize the fight to keep the purity of  The Grand Ole Opry institution alive.

10. Shaking Every Hand And Signing Every Album After Shows

This may not sound like some altruistic task for some artists whose shows stretch to top 75 attendees, but when you’re constantly selling out concerts with hundreds of tickets sold, and every one of those people wants to meet you, this simple gesture has become one of Hank3 signature symbols of showing how he’s willing to go the extra mile for his fans, sometimes patiently spending many hours after two and three hour performances to shake hands, sign autographs, and take pictures.

Showing that the show didn’t need to be all about him, while Hank3 was fighting with Curb Records and trying to get his album This Ain’t Country released, he took his friend Phil Anselmo—the former lead singer of Pantera—up on the offer to join his band Superjoint Ritual on bass. Between 2002 and 2004, Hank3 could be seen banging his head on stage as a side man in concerts across the country. When Superjoint Ritual shut down around 2004 and Hank3 returned to the country world and released the album Straight to Hell, he showed legions of punk and heavy metal fans the virtues of traditional country music and created many country music converts.