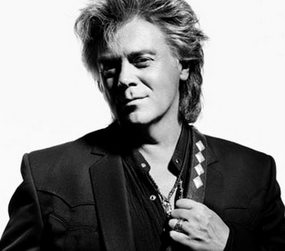 When it comes to the preservation of the history and sound of country music, you can make the case there is nobody who does it better and with more passion and dedication than Marty Stuart. Tireless and true to his convictions, from his music, to his archive of memorabilia, to his presence on television and the Grand Ole Opry stage, and to some of the thankless things he does well out of the public eye, Marty Stuart embodies everything behind the idea of Saving Country Music, and is a badass of the genre if there ever was one. 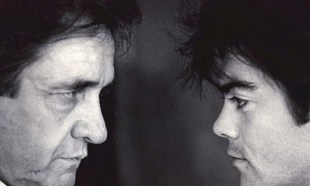 Unlike many of the country music prima donnas who’ve set up shop in country music recently, Marty Stuart comes from the school that believes you have to pay your dues in country music before it’s your turn in the spotlight. Marty Stuart started playing professionally as a sideman in Lester Flatt’s bluegrass band in the early 70’s at the tender age of 14 under the tutelage of legendary mandolin player Roland White. Marty stayed with the band until 1978 when it split up because of Lester’s failing health.

After spending a couple of years working with Vassar Clements and Doc Watson, Marty joined Johnny Cash’s band in 1980, and stayed there for half a decade as both a sideman and a studio musician. Stuart also married Cash’s daughter Cindy in 1983. The two divorced five years later after Marty left Cash’s band to pursue a solo career.

2. Keeping One of the Biggest Archives of Country Music Memorabilia

Marty’s vast collection of country music memorabilia is one of the biggest in country music. It has been featured at the Tennessee State Museum, the Rock & Roll Hall of Fame, and pieces are regularly loaned to the Country Music Hall of Fame for exhibits.

“I went to the first Hard Rock and I saw The Beatles, The Stones, Otis Redding, The Who, all their stuff on the wall. And in my mind I went, ‘Well that’s just as important if it’s Porter Wagoner, Hank Williams, George Jones, and who on.’ And so when I came back to America, I made it a mission. I mean it became my whole focus at that time. Get a record deal, start a band, make them look cool, and get all of the country music artifacts you possibly can and preserve them, lock them down, because they’re getting away fast.

“Everything was changing in country music. The look of it, the sound of it, and this stuff was just a throwaway”¦The ultimate mission is not just to preserve this stuff, protect it, promote it, save it, but to get the music into the hands and hearts of young people that are coming through and [saying), “Well I want to do that, but they tell me I have to be like so and so.” But we’ve already got one of those. Be who you are, at any cost.” (read full story)

Playing the Grand Ole Opry stage is one of the biggest thrills and highest honors any artist within the country music realm can be bestowed, but it is not an easy one achieve. One way to grace the stage is to be invited up by a standing member to play during their set, and that is how young, up-and-coming stars like Sturgill Simpson, to one of the oldest living country stars still around, the 90-year-old Don Juan Maddox of The Maddox Brothers & Rose both made their first appearances on the hallowed stage of the storied institution. Marty was also the man who officially invited Old Crow Medicine Show recently to become The Opry’s newest members; the first traditional -leaning band to be invited in the last half decade.

As explained above, Marty Stuart has many pieces of country music memorabilia, but none of them may be as prized as his guitar affectionately called Hummingbyrd. The 1965 Fender Telecaster was originally owned by famous guitarist Clarence White—a studio musician, member of The Kentucky Colonels, and most-famously, the guitarist for The Byrds (hence the “Y” in the name).

Hummingbyrd is no ordinary guitar. It was the original prototype for what is know as a “B-Bender” guitar—a custom job invented by Clarence White and Byrd drummer Gene Parsons, who happened to also be a machinist. The point of the custom job is to be able to mimic the moaning sounds of a steel guitar by bending the B-string up a whole tone through a series of levers activated by pushing on the guitar’s neck, body, or bridge. When Clarence White passed away, his wife sold the legendary guitar to Marty Stuart, who uses it as his primary instrument.

Included on Marty’s 2010 album Ghost Train: The Studio B Sessions is a instrumental called “Hummingbyrd” where Marty Stuart puts on a clinic on how to use this unique instrument. The song went onto win the Grammy for Best Country Instrumental Performance. Hummingbyrd shows both Marty Stuart’s passion for the preservation of country music’s history, and his prowess as a guitar player matched by few in the genre.

5. Standing Up To CBS / Columbia For Dropping Johnny Cash

A running theme in these 10 Badass Moments has been the firing of Johnny Cash from CBS Records in 1985. Merle Haggard mouthed off to CBS Executive Rick Blackburn about the firing, saying, “You’re the son-of-a-bitch that sat at that desk over there and fired Johnny Cash. Let it go down in history that you’re the dumbest son-of-a-bitch I’ve ever met.”

When Marty Stuart left Johnny Cash’s band, he signed to Columbia (previously CBS), and in 1988 recorded his second album for the label called Let There Be Country. However Columbia refused to release it. Though some have surmised it was because Marty’s first self-titled Columbia album didn’t sell well, in James L. Dickerson’s 2005 book Mojo Triangle, he explains Columbia didn’t release the album because Marty Stuart had a heated exchange with a Columbia record executive about the Johnny Cash firing. Columbia shelved the album in retribution, and Marty eventually left the label without recording another album for them. Marty then signed to MCA where he had his greatest commercial success, and amidst this success, Columbia decided to finally release Let There Be Country in August of 1992. 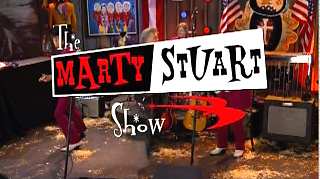 Patterning itself around the classic country music variety shows of the past like The Porter Wagoner Show, Flatt & Scruggs, and Hee Haw, The Marty Stuart Show is one of the last bastions for true, classic country music on television. Carried by RFD-TV, this weekly show features Marty and his Fabulous Superlatives, his wife Connie Smith, and just about the coolest variety of country music artists you can see on TV—artists from the new generation like Justin Townes Earle, Brandy Clark, Sturgill Simpson, Hank3, and The Quebe Sisters, to older artists like Don Maddox, Del McCoury, and Stonewall Jackson, and to artists in between like Jim Lauderdale, and Corb Lund. If they’re good, they appear on The Marty Stuart Show, and after five seasons, it has become its own country music institution, and an important distinction for the artists invited to play the show.

7. Playing with Lester Flatt on the Porter Wagoner Show at 14

Are you kidding me? That’s Marty Stuart folks, playing mandolin and singing!

8. Releasing Badlands: Ballads of the Lakota 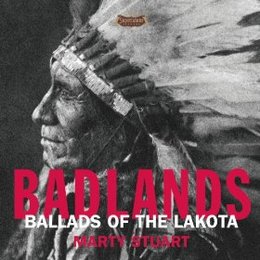 Similar to his mentor and hero Johnny Cash who released what was arguably the first country music concept album with his tribute to the American Indian called Bitter Tears in 1964, Marty Stuart released a concept album also in tribute to the American Indian called Badlands: Ballads of the Laokota in 2005. Recorded with his backing band The Fabulous Superlatives, it focused on the struggle of Native Americans, and was entirely written by Stuart except for one song, “Big Foot,” written by Johnny Cash. It was also recorded at the Cash Cabin in Hendersonville, TN, with John Carter Cash as co-producer.

But this album wasn’t just Marty patterning himself after Johnny Cash. Stuart has spent much time in the Dakotas learning about the Lakota Sioux, including studying at the Oglala Lakota College. For Marty, the poor treatment of Native Americans is a very real issue. 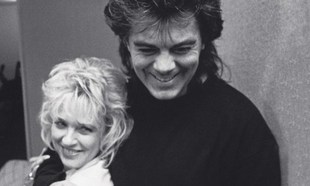 Why would a handsome young Marty Stuart marry a woman 16 years his senior? Well first off, have you seen Connie Smith? Aside from how good time and country music has been to her, she is bona-fide country music royalty and one of the most familiar faces of the Grand Ole Opry. But this isn’t some celebrity sham marriage, the matrimony speaks to Marty’s undying appeal for all things country music and the love between the two country stars is deep. Together, they’re a classic country dynamic duo that is hard to stop (and I have my suspicion at night they dress up as superheroes and do battle with Music Row’s most evil villains).

“Today the most outlaw thing you can possibly do in Nashville, Tennessee, is play country music.” –Marty Stuart