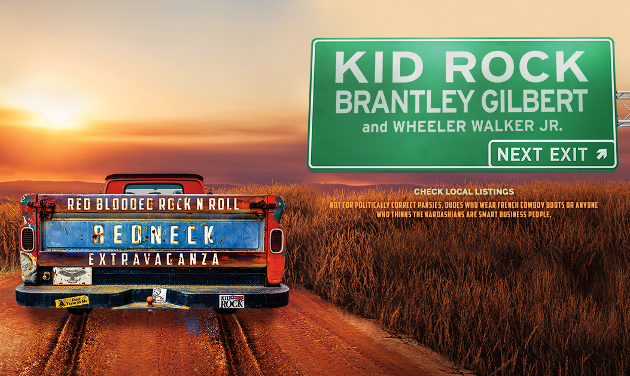 Yes, it’s a pretty unusual booking, but with a lot of important tentacles. The first thing that must be digested is that there’s no longer any question about it, Kid Rock is now officially a “country” music artist, like it or not. Shake your little fist, shrug your shoulders, or perhaps celebrate if you’re a fan of his, but when few were paying attention, Kid Rock signed to the country label Broken Bow, released a “country” record called Sweet Southern Sugar in November of 2017, and he currently sits at #23 on the Billboard Country Albums chart.

Because the whole Bebe Rexha saga has been sucking up all of country music’s attention, and the media has cried wolf so many times on the whole “gone country” thread for pop and rock artists, nobody put up a fight when Kid Rock waltzed right into the genre unperturbed, logging a Top 25 radio single with “Po-Dunk,” and another Top 40 single with “Tennessee Mountain Top.” The only reason Kid’s initial 43,000 records sold for Sweet Southern Sugar didn’t top the country chart is because it was released on an extremely busy week that also included Blake Shelton and others, and it only came in at #4. Kid Rock has been just successful enough to keep this “gone country” thing going, but has sneaked just enough under the radar where few are paying enough attention to put up a fight.

Meanwhile for Brantley Gilbert, this is yet another step down for a guy that at one point commanded one of the most wide and fervent fan bases in mainstream country, but seems to have hit a rough patch in the last few years. Where his first two records on Big Machine both sold over 1 million copies, his latest The Devil Don’t Sleep has struggled to make it above 200K. In 2016 and 2017, Brantley Gilbert was headlining his own tours at the arena level. Now he’s sharing opener duty with Wheeler Walker Jr. in the slightly smaller amphitheater setting.

And of course Wheeler Walker Jr. is the strangest part of it all. In the sci-fi world, they call it “continuity issues” when a storyline goes out-of-bounds from previously-established narratives. Okay, Kid Rock is the preeminent mutt of American music, which makes him an easy to fit for someone such as Wheeler Walker. But a performer like Brantley Gilbert stands for everything Wheeler Walker Jr.’s online presence has been against for the last few years. Granted, some slot Wheeler as a parody artist when he isn’t, but just about nobody has been more outspoken about bad country music like the stuff Brantley has built his career upon than Wheeler.

Also, Wheeler Walker Jr. has been a bit outspoken politically, taking on some of the bigoted fans his music naturally attracts, and who are naturally attracted to someone like Kid Rock, his whole “Dumfuckistan” campaign against non-Trump states, and his defense of the Confederate flag. Don’t get me wrong, I’m not accusing Kid Rock or his fans of anything, but it’s a bit unclear how that jives with some of the previously-held stances by Wheeler Walker publicly. Previous bunk mates of Wheeler Walker Jr. include Birdcloud, who are about as outspoken politically against people like Kid Rock as anybody.

Also, you think it’s awkward for Wheeler Walker Jr. to be on a tour with Kid Rock and Brantley Gilbert? Try to be perpetrating the most raunchy country music persona possible in the midst of the #metoo movement and the most fervent political correctness regime we’ve ever seen. This is what Wheeler Walker Jr. is facing. It also weirdly makes a Kid Rock tour one of the few places Wheeler’s brand of music comedy can still be accepted.

And there there’s Brantley Gilbert fans who veer very religious, which will make for some very interesting facial expressions when they’re finding their seats at the Toyota Amphitheatre in their bedazzled Cavalry Cross skin tight Tapout T-shirts, and Wheeler’s singing about … well, Wheeler stuff. But perhaps that’s the whole point of the booking, at least for Wheeler. He certainly will be reaching more people than if he remains on the club circuit, and maybe it’s Brantley Gilbert fans who need his “preaching” about the ills of pop country the most, even though Gilbert fans often pride themselves as being better, and more authentic than that average pop country fan, and granted, at times Brantley has delivered some better songs.

This is not the first time an artist from the country underground has tried to take a big step up by kissing the ring of Kid Rock. Hellbound Glory also tried this maneuver in 2012 with mixed results. Yes, it put the band’s name out there like never before and bought them a new touring van, but it also resulted in a mild implosion afterwards, though fans of Hellbound Glory know that implosions have always been part of Hellbound Glory’s narrative, and charm. Interesting to note, a few months ago Hellbound Glory started trolling Wheeler Walker Jr. on Twitter, saying they would make a perfect touring pairing, and they probably would. And now they both have Kid Rock in common.

Wheeler Walker Jr. has and will continue to see blowback for booking himself on a tour like this from his fans, but in many respects he’s sitting in the cat bird’s seat here. He’s definitely the 3rd rail on this tour, but he’s also just elevated his name right beside two artists much higher on the totem pole, while frankly the other two are being lowered. That has to be the long game thinking from Wheeler’s team, as well as being able to bring in a bigger touring purse not just now, but in the future after the experience. The only question is if Wheeler Walker Jr. will parse his fan base in the process, and just how bad. A lot of his fans certainly won’t be ponying up for a billing like this.

Touring is where the money is made in music these days, and the more folks you can draw the more money you can make, and not just from ticket sales, but from sharing venue costs which reduces overhead. Big bills also entice people to travel from neighboring markets to make a show. This is the stimulus behind other recent tour pairings of a curious nature such as Lucinda Williams, Dwight Yoakam, and Steve Earle. But the question is if it’s serving the best interests of the public. Plenty will look at this lineup and find the nearest receptacle to vomit in regardless. But the biggest concern for promoters is if established fans of the respective artists refuse to pay for tickets because of someone else on the bill. This tour billing definitely crosses the cultural divide, and in many different ways.

Time and ticket sales will bear out whether this tour lineup makes sense for anyone involved. But as independent artists continue to rise in popularity (including Wheeler Walker Jr.), and certain mainstream artists continue to come back down to earth, don’t be surprised if we see more and more of these strange tour bookings as everyone tries to squeeze the most they can out of the live music dollar.