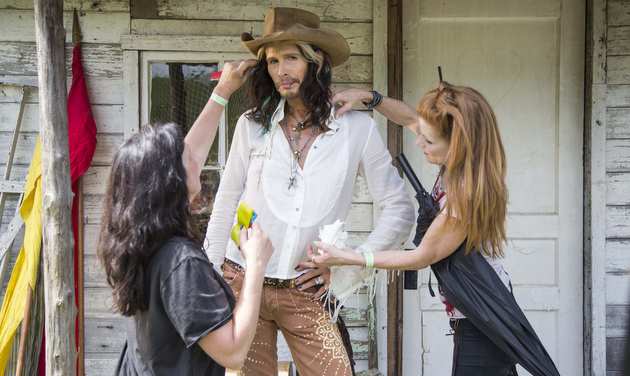 Steven Tyler deciding to “go country” recently is so achingly predictable and cliche, but unlike other aging rockers who switch to country to save a dwindling career, there’s still plenty of meat on the Aerosmith bones. The rock band could be touring the country and world right now and filling up arenas just fine, but instead they’re on a hiatus so frontman Steven Tyler can chase a lark. As you can imagine, some of Steven’s band mates aren’t too happy about it, and see right through his “country” career just like many true country fans.

“Hey, if I didn’t know him when I heard the song I’d go, ‘It’s okay, next,’” Joe Perry says to USA Today about Steven Tyler’s recent single. “I’m not going to say anything else about that. Steven is in Nashville doing whatever he’s doing. He’s got a (bleeping) rhinestone cowboy hat going, ‘Yippee ki yay.’ I don’t know what else to say about that.”

Steven Tyler signed to Big Machine Records in April of 2015. His first single “Love Is Your Name” was not terrible, but stalled in the charts. So Tyler recently released the dreadful “Red, White & You,” which might go on to be the worst “country” song of all 2016 with unbearable lines like, “We spinning’ on a roller coaster, A “Free Fallin’” into your yum yum”¦”

But as some have pointed out, Joe Perry has had his share of side projects as well and has released multiple solo albums. Perry has also been using the hiatus to play with the supergroup Hollywood Vampires who recently performed on the Grammy Awards. However the Joe Perry solo material is much more complimentary of the Aerosmith legacy than what Steven Tyler has done in country so far. If anything, Tyler’s country career is sputtering, and we have yet to hear of a release date for his proper country album.

Joe Perry isn’t the only Aerosmith member who has spoken out against Steven Tyler’s country move. Brad Witford told Billboard recently, “We kind of feel a little bit abandoned by him. I guess he seems to think his solo career is going to go great guns, and he doesn’t seem to realize that in my opinion his fans around the globe want to see him in the context of Aerosmith and don’t really care for whatever he thinks he’s gonna do.”