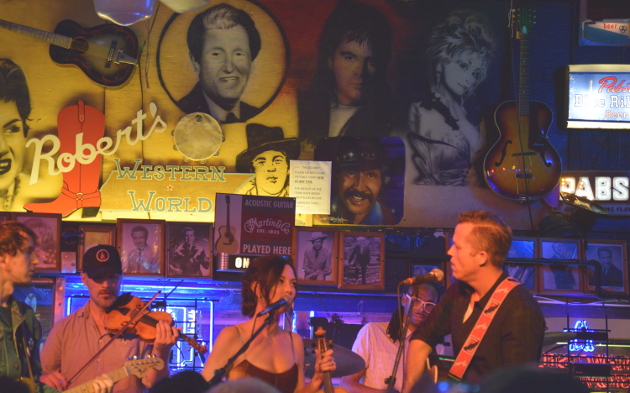 “If you don’t let country be defined by what’s on the radio then you can enjoy it at Roberts Western World.”

After the awards, Jason Isbell did like so many artists of country music’s storied past once did after playing at the Country Music Mother Church. He ambled out of the backstage exit into the famous alley that separates the Ryman and the bars of Lower Broadway, and took the stage with his wife Amanda Shires at Robert’s Western World—one of the last true honky tonks on Lower Broadway, and one of the few where you can actually hear authentic country music being played—and promptly slayed the surprise crowd with Merle Haggard covers.

Though you’re lucky to see Isbell play in anything less than a sold-out 1,500+ capacity venue these days, the Robert’s crowd got a treat as Jason Isbell proved he’s got country cred, belting out a great rendition of Merle Haggard’s “Sing Me Back Home” accompanied by Amanda Shires on fiddle and harmony as the house band that included ubiquitous drummer Jeremy Pentacost and guitarist Adam Meisterhaus didn’t miss a beat. Then Amanda Shires sang her own Haggard cover in her signature Texas cadence before the Americana power couple gave up the stage to none other than Steve Earle, who had also performed at the Americana Awards. Walking through the crowd with a guitar slug over his shoulder, Earle beat out a hard-driving version of Waylon’s “Are You Sure Hank Done It This Way” as the crowd went nuts.

Also in attendance at Robert’s for the unofficial Americana Awards afterparty was Cary Ann Hearst of Shovels & Rope who also took the stage for a couple of songs, Texas country songwriter Jack Ingram, Dave Cobb, Sam Outlaw, Michaela Anne, and a slew of others, including Sam Palladio, also known as Gunnar on the TV Drama Nashville, who presented an award earlier in the night, and was glad handing and selfie talking with the Robert’s crowd well into the evening. Lower Broadway Mayor Josh Hedley acted as conductor for the festivities.

Jason Isbell and Amanda Shires may now be as big celebrities as you can get in the independent music world and proud parents of a 1-year-old girl, but they’re not too proud to prove they’re still true musicians at heart who can hang out with the hoypiloi, and perform Haggard cover on the spot better than many country bands.