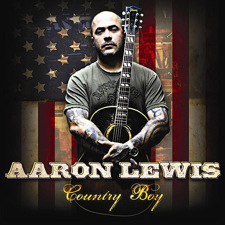 As a proprietor of country music, I would like to officially blame the Staind alt-rock version of Aaron Lewis for his slurred delivery and for screwing up the words to The National Anthem Sunday night before Game 5 of the World Series, and not the “Gone Country” carpetbagger/interloper solo country music performer Aaron Lewis (though in fairness, not all of his country music sucks).

Aaron Lewis only had one task Sunday Night, ONE TASK! … before the upsurging Kansas City Royals took on the San Francisco Giants. And despite the patriotism he crammed down our throats in his first country single “Country Boy,” he couldn’t even get the dern Star Spangled Banner correct when singing at AT&T Park. “What so proudly we hailed were so gallantly streaming.”

Hey, it’s a big pressure moment; we all understand. Maybe Lewis should have taken a cue from some of his new country brethren, like Luke Bryan who got caught red handed trying to hide the words written on his hand, or Wynonna Judd, who didn’t even try to hide that she couldn’t remember what most elementary kids can recite on cue.

It would be a little easier to forgive Aaron Lewis if he hadn’t bagged on Christina Aguilera and Cyndi Lauper for screwing up The National Anthem in 2011.

“Fuck, it worked for Christina,” Lewis said in Westbury, NY on 2-20-2011. “Or was that Cyndi Lauper? I guess I just don’t understand how people who sing The National Anthem can be so fucking self-absorbed that they would try to change that fucking song.”

As many people pointed out, probably not smart to sport your “Don’t Tread On Me” tattoo so prominently on your neck, and then engage in this type of mishap. Or to write words like this to your debut country single:

Now two flags fly above my land that really sum up how I feel
One is the colors that fly high and proud
The red, the white, the blue
The other ones got a rattlesnake with a simple statement made
“Don’t tread on me” is what it says and I’ll take that to my grave
Because, this is me
I’m proud to be American and strong in my beliefs

I love my country, I love my guns, I love my family
I love the way it is now, and anybody that tries to change it
Has to come through me, that should be all our attitudes
’cause this is America and a country boy is good enough for me son

What do they say about glass houses?

Hey, Aaron Lewis has been a fighter for real country music, and it seems like his heart is in the right place most of the time. We all make mistakes, and so we should all forgive them. But some of us just happen to put ourselves in a position where when we do, that spotlight shines just a little more brightly.

UPDATE: Aaron Lewis has released a statement about the performance:

All I can say is I’m sorry and ask for the Nation’s forgiveness. My nerves got the best of me and I am completely torn up about what happened. America is the greatest country in the world. The Star-Spangled Banner means so much to so many, including myself. I hope everyone can understand the intensity of the situation and my true intent of this performance. I hope that the Nation, Major League Baseball and the many fans of our national pastime can forgive me.