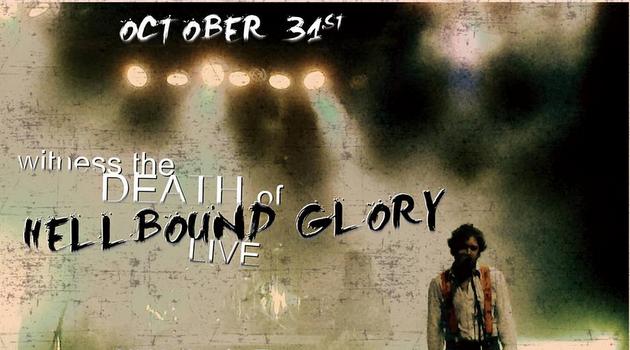 Ever since October 1st when Reno, Nevada-based country outfit Hellbound Glory posted on their Facebook page “31 more nights… till the death of Hellbound Glory…“ speculation has run rampant about what might befall the band on All Hallows’ Eve as it fastly approaches. Subsequently Hellbound Glory has booked a concert they’re advertising by saying “Witness The Death of Hellbound Glory,” set to transpire on Oct. 31st—Halloween night, at the Buckhorn Lodge in Pioneer, California—a couple of hours from Reno.

So what’s happening? is Hellbound Glory truly dying? Is it a publicity stunt? Though Saving Country Music has reached out to Hellbound Glory just to make sure everything is okay (meaning nobody is really dying), what Hellbound Glory will look like on November 1st still remains a mystery, and may yet to be determined in full by Hellbound’s principal members themselves. What we do know is there will be a change, and it will likely be a big one.

The only permanent member of Hellbound Glory since the band’s inception in 2008 has been the frontman and songwriter that goes by the name of Leory Virgil. The band’s first two albums Scumbag Country and Old Highs & New Lows became landmarks of independent/underground country music and still remain testaments to Leroy’s prowess as a frontman and songwriter, along with his newer albums, 2011’s Damaged Goods, and the recent 2014 LP called LV.

2012 saw the band receive a huge step up when it was announced they would be opening for Kid Rock on a nationwide arena tour. This looked like the moment this much heralded independent country band had been waiting for, and they were finally getting their due. But something has happened to Hellbound subsequently. After the Kid Rock tour, Hellbound shed virtually all of its members save for Leroy Virgil and drummer Francis Valentino. Even the lineup for the Kid Rock dates was a departure from the original Hellbound Glory lineup that was featured on those first two records. Though you couldn’t ever doubt the power of a Hellbound Glory song, the band fluctuations made Hellbound Glory hard to define.

Who was Hellbound Glory? Were they a rocking power trio? An acoustic singer/songwriter outfit? Or a full five-piece country band? They’d been all three in recent memory, and it may have been a little hard for fans to keep up. And a band that many had pegged to be one that could blow up nationally, similar to what has happened recently with acts like Sturgill Simpson or Jason Isbell, stayed put in relative obscurity despite their amazing songs, some big tours, and a rich discography.

So it’s time for a change. A shake up. But what? Here’s the three major possibilities.

Hellbound Glory is Truly Going Away

That’s right, meaning no more Hellbound Glory, and no more Leroy Virgil. Gone. Kaputz. Maybe some weekend solo shows in Reno every few months just to get the devil out, but Leroy Virgil quits music as a full time pursuit. This certainly would not be out of the realm of possibility. He’s married now with a young son, gray hairs are filling in, and he isn’t getting any younger. He gave it his all, but Hellbound Glory just may be one of those bands that was too good, and too real to be successful at a sustainable level.

Hellbound Glory Is Simply Going Through A Name Change

Long-standing followers of Hellbound Glory know that this has happened with the band before, though maybe not to this significant of a degree. When Leroy Virgil was doing more of a singer/songwriter thing, sitting on a bass drum and had a band of stand up bass and slide guitar, he was calling it “The Excavators,” though the Hellbound Glory name was still being used too. As Leroy told Saving Country Music in an interview in May, “As I’ve changed lineups, I’ve always called the band something different. For a while we were the Excavators, for a while I was calling it the Damaged Good Ol’ Boys, for a while to was the Damn Seagulls, so it’s always kind of changing up for me.”

So maybe Hellbound Glory will simply be changed to something different to give it new blood and create new interest.

Leroy Virgil Will Drop “Hellbound Glory,” and Go Under His Own Name

This is something that worked very successfully for Sturgill Simpson when he dropped the Sunday Valley moniker. Sturgill’s name change is considered one of the keys to his meteoric rise. Country music is mostly a solo name business, and for some reason bands working under an individual’s name tend to do better. Remember, Hellbound Glory’s last release was called LV for Leroy’s initials. Maybe this was a hint of things to come. And interestingly enough, Leroy wrote the single for that EP called “Streets of Aberdeen” on Halloween. It is about the famous serial killer from his hometown of Aberdeen, WA, and the song was recorded in one of the spaces the serial killer used to frequent.

As Leory told Saving Country music in the same May interview about changing to his own name,

“I’ve actually considered it a lot. We’ve talked about it, but there’s so much momentum going with Hellbound Glory and I’ve got so many years of work into it. Within a week or two of moving to Reno, I’d written the song and turned it into a band name. So it’s been something I’m stuck with. Part of me would like a change. But it’s a great band name when you think about it. It’s good and evil, heaven and hell…Hellbound Glory has always been my thing. It’s always been less of a band, and more of a gang. People come and people go, and people come back.”

It’s also a possibility that Leroy decides to go under his own name, but doesn’t use “Leroy Virgil.” For example, “Sturgill” is Sturgill Simpson’s middle name, while his first name is “John.” This could mark a new era and change of scenery for Leroy.

Either way, as Hellbound Glory fans are getting ready to go out Friday night, gussying up the kiddos in their costumes, or painting themselves up for a night of haunting on the town, it will probably be worth giving a peek to what Hellbound Glory has to say about what the future holds. Because this band’s music has been too good to end up as a corpse. Hopefully there is life after Hellbound Glory.