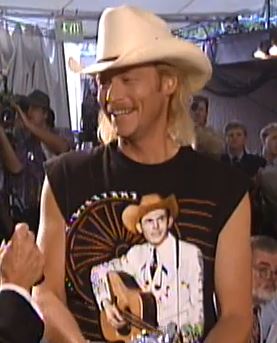 Country music star Alan Jackson has been known for being a staunch traditionalist, and a man who has stood on principle and for protecting the roots and legends of the music throughout his career. One of the most famous moments in country music lore involves Alan Jackson at the CMA awards show in 1999 when producers told George Jones he would have to perform an abridged version of his song “Choices.” George refused, and boycotted the awards altogether. Then in protest, during Alan Jackson’s performance of his song “Pop A Top,” he reversed course and started into George’s “Choices” in solidarity with the country legend.

But this wasn’t Alan Jackson’s only moment of protest during a prime time awards show apparently. Years earlier, at the 1994 ACM Awards, Alan Jackson pulled at stunt that has gone unfairly under-recognized in that annals of country’s finest moments of rebellion and protest.

The 1994 ACM Awards were in many ways Alan Jackson’s oyster. Held at the Universal Amphitheater in Los Angeles on May 3rd, Alan walked away that night with the Top Male Vocalist award, and co-hosted the event with Reba McEntire. But when it came to performing what would be his upcoming #1 single and one of the signature songs of the era “Gone Country,” Alan Jackson couldn’t sit right with the charade most country award shows pull on their audience.

Alan Jackson walked out for his performance wearing a Hank Williams sleeveless shirt, which in itself was quite irreverent and newswrothy in 1994, when country award shows were still predominantly black tie affairs. Executive producer Dick Clark in a backstage interview during the show asked Alan, “I should ask you a significant question. Here you are on television in front of millions of people. Why do you have a Hank Williams T-shirt on?” Jackson’s response was, “Well, I love Hank, and a fan…I get a lot of gifts on the road playing, and a fan gave me this shirt, and I just saw it in the closet before I came out here this weekend and I grabbed it and said, ‘I’m gonna wear it for my song,’ you know, ‘Gone Country.’ Hank’s country.”

But it wasn’t just Alan’s Jackson’s shirt that caught people’s eye and no doubt drew the worst ire of the ACM producers. Before the show, producers had told Alan that he had to play to a pre-recorded track, which Jackson clearly felt was tantamount to lying to both his fans and the audience. So instead of playing along with the charade, Jackson tipped off the audience to the subterfuge by telling his drummer Bruce Rutherford to play without sticks. So as the performance transpires and everything sounds perfect, there is Alan Jackson’s drummer, swinging his arms like he’s playing the drums, but with no sticks in his hand.

The performance certainly must have raised a stink at the time, but information and news stories about the incident are virtually non-existent. Dick Clark and the other ACM producers may have hoped only a few people noticed, and decided rather to ignore it than to shine a spotlight on the practice of pre-recording performances.

Nirvana also had a pretty memorable protest to being asked to play to a pre-recorded track.