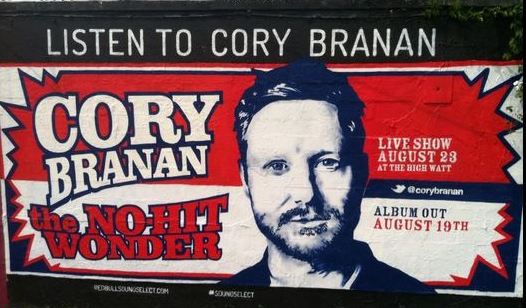 You see the mural above? It is currently on display in East Nashville where a rising swell of songwriters is currently setting the pace for artistry and depth in the greater country and roots world. And chief among these cutting edge artists at the moment might be the Mississippi-born and Memphis-bred Cory Branan, who has just released his second album with Bloodshot Records called The No-Hit Wonder.

Steeped very much in the muse that resides in the independent underbelly of Nashville and challenges songwriters from the rabid nature of the friendly competition and healthy collaboration fostered between performers in such close proximity, The No-Hit Wonder could be looked at as a good road map to the East Nashville music experience, or at least a starting point. With a number of contributions from Jason Isbell, and appearances by other notable East Nashville apparitions such as Austin Lucas, Caitlin Rose, and Tim Easton, we may look back at The No-Hit Wonder when the rabid gentrification of East Nashville has finally scattered the artist class to the four winds as a project exemplifying the artistry and collaboration that once ruled that turf in an important era of roots music.

If you’re gazing slunk shouldered at your Jason Isbell and Sturgill Simpson records as so loved that you’re tired of listening to them, The No-Hit Wonder may just be the project to point your nose toward next. Though the strong rock performances in songs like “You Make Me” and “The No-Hit Wonder” are likely to be what get the most people chirping, the album is very much steeped in country traditions, like that old guard alt-country spirit that started with country, and sped it up a bit from a punk rock approach.

You can draw all sorts of lines from Cory to other famous musicians, like Chuck Ragan who calls Cory the “greatest songwriter of our generation,” or Lucero who once immortalized Cory in the song “Tears Don’t Matter Much,” saying Cory Branan’s got “words that’ll bring you to your knees.” He’s one of these songwriters that has gone far in inspiring and challenging his peers, and the fingerprints of Cory’s style can be found in independent roots music far and wide. 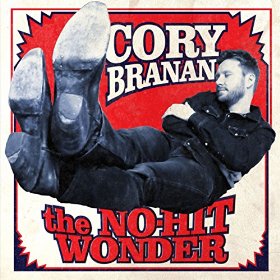 But these musical types are not always the most successful themselves. In some ways it is their lot to be sung about in Lucero songs, but remain a serious challenge for labels and publicists to know what to do with. This is the symbolic message contained in the cover and title of his new album—how his career can be defined by some incredible praise, but in the end an artist like Cory Branan will always find difficulty connecting with the average American. It is all of the substance, but none of the hype. This is the theme of The No-Hit Wonder, and an eternal theme of the East Nashville scene.

Cory’s first album on Bloodshot Records after a six year recording hiatus was 2012’s Mutt—a wide-ranging, curious affair that couldn’t be denied of its songwriting moments, but challenged the ear possibly a little too much to the point where the brain got tired of shifting sonic gears by the end. Cory called it “Mutt” to describe the disparate influences and styles that went into the album, but in the end he may have proved why genres still matter, or at least why approaching an album with more of a cohesive mood does.

The No-Hit Wonder is a completely different story. This is old school country rock at its finest, with exquisitely-crafted, cunning lyrical runs that make you laugh, amazing insight enhanced by brilliant timing and pentameter, and musical clothing that enhance each song’s strengths and endear them to the audience, pointing them the way to the album’s enjoyment. Yet there’s still some great variations here throughout the record to keep the listener enthralled. “Sour Mash” with Tim Easton is a perfect little country tune with its take off Telecaster. “C’mon Shadow” and “All The Rivers in Colorado” are great little country tunes as well. “All I Got And Gone” is where you hear Cory’s Tom Waits influence seeping through, while the final track, “The Meantime Blues” shows of Cory’s finger picking prowess on the acoustic guitar that some say challenges Cory’s songwriting as his most noteworthy skill.

This is the album Cory Branan needed to write, record, and release. Enough time had passed since his earlier works in the 00’s, and a whole new crop of listeners have emerged for this type of music to where it was necessary to re-introduce himself to the musical world in a way that could open his entire body of work to a hungry audience always looking for new songwriters to sink themselves into. The No-Hit Wonder may not pole vault Cory into the Top 10 on Billboard and make the title a bit of irony, but it should land him a wider audience beyond the notoriety of an East Nashville mural.