I really want to like Hayes Carll. He’s a Texas boy, and I’m a Texas boy. He’s on a great label in Lost Highway Records. He’s an understudy of the great Ray Wylie Hubbard and other Texas songwriting legends. People like to compare him to Guy Clark and Townes Van Zandt and Tom Waits. But in the end, though he’s a good songwriter, he’s not a great one, and the overselling and mischaracterizing of his music has led to some unnecessary criticism, and a missing of the point that his music is fun, and meant to be enjoyed.

When I first saw the cover of KMAG YOYO (military acronym for “Kiss My Ass Guys, You’re On Your Own) I was in fear for the soul of this album. The hipster pose in an ironic sweater made me worry that maybe our Texas boy had gone indie rock. Fortunately the music itself helps dispel this worry patently, though it makes me hate the cover even more.

Despite some verbiage I’ve read saying that with this album Carll distances himself sonically from the Texas scene, I would disagree. First off, this album is country, Texas country, being country with a dash of rock and blues and elevated songwriting. There’s steel guitar and witty penmanship. However there’s not a whole lot that is new or special here, sonically or in the songwriting.

Hayes Carll’s persona seems to be that he’s a wandering, bumbling drunk with a pen, in the Earnest Hemingway/early Jerry Jeff Walker mold. The problem is that you don’t always believe him; it comes across more as a bit. His inflections feel forced and rehearsed, and though his lyrics hold the appearance of hard living, they don’t hold the biting soul that actually comes from it. I have no doubt that Hayes likes to drink. A lot. So do many others. The effects of hard living can in some cases lend to good songwriting, but recounting the hard living itself in songwriting can sometimes feel shallow. 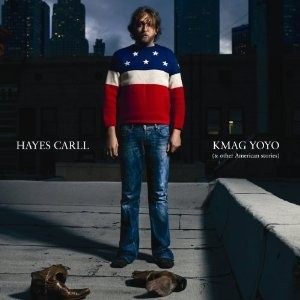 Hayes has been compared to Tom Waits, but Waits has the ability to roll from playing a downtown drunk, to a maniacal rural recluse, to a swanky piano player in a smoky bar, and even though you know none of this is true, you believe him. Carll doesn’t try to pull off even half of this diversity in contrast, and still only does it half as well.

Songs like “Hard Out Here” and “Another Like You” are great examples of this: ambling, slurred, sloppy songs that are fun, but don’t say much in the end.

The songs are sometimes witty, sometimes deep, but not always both at the same time like the great songwriters can do. And the music is not original enough, or visceral enough to make that something that draws you in either. Not everybody can be Guy Clark or Townes Van Zandt, and that’s OK. But if you can’t, maybe you shouldn’t try. By the end of the album the one-liners and clever rhymes almost work against Hayes, as they expose the shallow bones behind his songwriting method while still trying to assert that his songwriting is top shelf.

The songs I did like were the ones that took a simplistic approach, and are probably the ones most people will pass over. “Chances Are” doesn’t over-try, it just tells the story and works. I’m normally out on any song that is about Christmas, but “Grateful for Christmas” is a good, sad song most can relate to, though by the 11th song of the album, rhymes like “Let’s play cards and watch the news channel. I love you too, and thanks for the flannel” just fall flat. Carll’s lines in “Bottle in My Hand” are pretty good, but Corb Lund’s and Todd Snider’s lines (the two also appear on the track) are better, and the song works well save for the silly “swaying Irish drunks” production.

I hear a lot of rehashing of songs in the music. The bluesy songs feel very Bonnie Raitt. The title track “KMAG YOYO” and its machine gun lyrics is a close cousin to Garth Brooks’ “‘Till The Sun Comes Up” and so many other songs that also use this formula. “The Lovin’ Cup” sounds like half a dozen Tom Petty songs in the chorus, and nearly a pop country song during the rest.

The instrumentation is bland and safe. You may not even recognize there’s instruments being played unless you listen for them. It has that soul-less, session player’s feel, even though Hayes used his own band. He also says that he wrote the music first, and then added the lyrics to it. This segregation of lyric and music can be heard in the finished product. I especially disliked the organ parts. You can almost hear the folks in the studio going “What this song needs is organ,” and then they add it to the track, lightly and safe in the back, and trailing off at the end of the song with an extra-long tail, enamored with the tone instead of objectively asking if it enhances the song. The exceptions are “The Letter” and “Bye Bye Baby” which accomplish a lot by trimming up the arrangements to only what’s necessary, and really doing justice to the heart of the song.

The organ and drums at the beginning of “Grand Parade” scream early 90’s Bonnie Raitt, which may be exactly what some are looking for, but I’m looking for something I’ve never heard before, or at least something unexpected. In some ways this music comes across as dirty music for clean people, as country for folks with master’s degrees in anthropology. It’s country for people who like the rootsy feel, but want to know that the artist has the same political beliefs as them.

I’m saying all these mean things about this album, but in the end it is a really fun album to listen to, and I give it a lot of credit for that, and really, it is fun enough to look over many of these criticisms. And it is accessible, without exorcising all soul, substance, or sincerity. I would love to hear Hayes Carll take over country radio, because on the whole, it would be so much better than most of the stuff found there, and it has a good enough, and accessible enough sound to be given consideration in radio rotations.

But there’s so much better. When you’ve listened to albums like Roger Alan Wade’s Deguello Motel, it’s so hard for music like this to be potent on you. And when you compare Hayes Carll to Tom Waits and Guy Clark, then that is who I am going to compare him against, and that’s when his music starts to fall apart. Everybody seems to want to crown him as the next great Texas songwriting god. How about just calling him a good songwriter, with above average Texas country music with some soul that’s fun to listen to and doesn’t make you feel stupid like the stuff on the radio. That’s something I can get behind.

One gun up for a fun, accessible, witty, and sometimes soulful album. One gun down for predictable song structures, a lack of unique production, and hints of inauthenticity.