If tasked to do so, I will unflinchingly and wholeheartedly endorse that Leroy Virgil of Hellbound Glory is one of the greatest songwriters of our generation—up there with Jason Isbell, Cody Jinks, John Moreland et al, even if it’s of a different breed—puffing my chest out and challenging any man, woman or beast who would be willing to assert otherwise within my depth of sensory perception.

You may not necessarily find the definitive evidence of such a bold claim on this particular record, but you will find some corroborating evidence. Hellbound Glory’s first two records—Scumbag Country from 2008, and Old Highs and New Lows from 2010—are two of the best records to ever be logged into the country music canon, and still hold up today, even upon an incredible amount of repeated listens. Frankly, they blow much of what we regard as the best of country today out of the water. They’re the stuff of underground country legend, and not just because of Leroy Virgil’s singing and songwriting, but the entire Hellbound Glory package, from the players and pickers to the production.

But the Hellbound Glory flame burned a little too hot, and as flames tend to do, it sort of burned out. Hellbound Glory was just too good, and too Outlaw without the support it needed to sustain, and started to veer off the rails at some point. Subsequent albums, like the more stripped down Damaged Goods still had some really stellar moments, but began to show the wear and tear of Leroy Virgil living out his own songs. We love that authenticity from our favorite artists, but it doesn’t always love them back.

It would be easy to sit and point to the corrupt and unjust ways Music Row does business as the reason for the continued obscurity of Leroy Virgil and Hellbound Glory, and not to say that hasn’t factored into the equation. But Leroy has always been his one of his own worst enemies, like it is for many of music’s most brilliant and gifted voices and writers. It may not be a case where he’s perpetually cutting off his ear to find his muse, but he is certainly willing to follow his nose even if may not always lead him in the right direction. At one point Hellbound Glory was signed to the prestigious The Agency for booking, and was opening for arena crowds on tour with Kid Rock. What appeared to be the band’s biggest break turned out to be its worst case scenario, pissing off some core fans, and making only a few others that Leroy eventually would lose through subsequent name and lineup changes.

At one point Leroy was touring and releasing music under the name the eXcavators, and another under his birth name, Leon Virgil Bowers. It became hard to keep up. His touring schedule and band personnel was inconsistent. There were random releases of new material compiled from questionable and crude recordings, while sessions in Nashville with Shooter Jennings, and other promising news of recordings done in Detroit rendered no new legit studio projects. At one point the Hellbound Glory name was put to death, only to be later resurrected, apparently.

And so it took a dedicated sense of fandom to follow all of the weaves and bobs, and to listen through whatever lineup or production issues persisted to the heart of Leroy Virgil’s songs, which still remained stellar, even if they were stripped down and he was playing them on a cheap, $70 guitar at the side of the stage after a show. And for some, this was the allure of the whole thing. You had to put effort out to remain a Hellbound Glory fan. He went from playing to arenas, to hardly drawing crowds in key markets. But you never lost that sense of ownership or intimacy with the music like you did with Sturgill, Isbell, or Jinks. Leroy was still right there, arriving in a wrecked out road vehicle in your hometown, and playing for a gaggle of you and your friends, yet giving up nothing in raw talent. 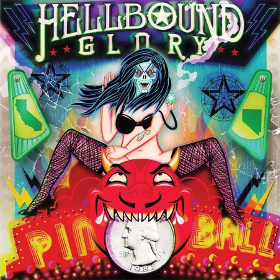 But time had long since come and passed that Hellbound Glory needed a new album, especially since so many of Leroy’s great songs were starting to get worn out from being played on stage for years, or from homespun recordings released in crude form. That was not the best way to take care of these creatures that can feel stale by the time a proper studio recording is released. So after years of stutter steps and procrastinations, Leroy decided once again to get into the studio with Shooter Jennings, and Pinball is the result.

There are two general trajectories human beings take in life. For some, the arc bends upward from the result of stability, maybe sobriety, and the charge to better oneself. Consider the specimens of Jason Isbell and Sturgill Simpson for this first scenario. For others, they tend to level off at some point, find a groove, and give into what they feel is their fate and lot as a human, embracing it sometimes with a stubbornness, and a pride. Pinball is an album for that second lot—an exploration of the American id, fueled by drugs, guns, and danger, unforgiving and unapologetic, but no less poetic in its expressions, just set in different parameters, and a hell of a lot more fun.

Pinball is for Republicans who like to party, and for those that like to go along for the ride, either personally or vicariously. Yet don’t think this implies that the articulation is any less intelligent than the more genteel, hoity toity Americana fare. The way Leroy Virgil can weave a phrase is incredible. It’s just his subject matter is often about crushed prescription drugs mixed with rural aphorisms. He speaks to the fallen angels of society and victims of the American dream forgotten in the Heartland and beyond the city limits, proud of being scumbags because there’s no other resort. This is the real America that you won’t find represented in a Luke Bryan song. It’s Hank Williams Jr. on Adderall; it’s anthemic affirmations for the age of the opioid epidemic.

The opening song “‘Merica (The Good Ole U.S.A.)” is just about what you expect it to be. “Hellbound Blues” is the quintessential Hellbound Glory drug song, holding nothing back, and showing off Leroy Virgil’s clear superiority at turning a phrase. At the heart of Hellbound Glory has always been a deep sadness, even if it tends to be free of remorse, and that’s what you get at the center of this record, and arguably the project’s best song in the comparatively acoustic and sedated “Empty Bottles.”

But Pinball also has a few moments that just feel like filler, like the title track, and “Sun Valley Blues (Bloodweiser),” which was released as the first single. Virgil also recycles “Another Bender Might Break Me,” which was the opening track off of 2010’s Old Highs and New Lows, and includes a cover of “Blue Yodel Number 5 (California Blues).” One of the issues with Leroy Virgil’s songwriting is he’ll get tired of his own material before he even gets a chance to make a proper recording, while falling in love with something else that is not as good because it’s new. There are songs out there that have been played dozens of times, and were maybe released on some now scrubbed digital-only compilation that could blow some of the material on Pinball out of the arcade. But again, this is all kind of the rigors of being a Hellbound Glory devotee.

A lot of people will expect remarks on the production of the record since it was handled by Waylon’s famous son, but if anything it’s a non issue, like the production of a record should be. Shooter did a fine job. It’s going to be near impossible to emulate or recapture the magic that occurred in those first two Hellbound Glory records unless you get those same players and put them in a studio in Leroy’s main haunt of Reno, NV. And with how wishy washy Leory’s been with signing off on the release of previous studio material, you’re not sure if it’s worth bringing in a dedicated A-team to cut a record you hope will sell thousands of copies upon release. That’s just not going to happen with Hellbound at this point, so assemble a good solid studio lineup which Shooter did, cut the songs, and get it pressed.

Questionable cover or no, Pinball is still a fun record, featuring really enthralling songwriting at times, with a few selections worthy to be installed in Leroy Virgil’s resume as top flight material. Scumbags need heroes too, and people to sing about their lives uninhibited by the uptight norms that keep country music a space apart from the reality that some find themselves living amongst. Leroy Virgil and Hellbound Glory are those heroes.