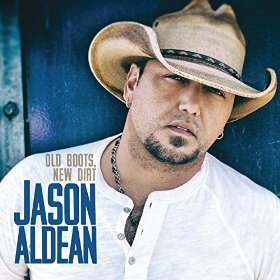 Yeah I know I’ve been rough on ol’ Jason Aldean over the years. But I’m sorry, I think his latest release Old Boots, New Dirt is the best damn R&B/sexytime album I’ve heard all year.

Silly me for thinking that the experience of having his home ripped apart by his own selfish actions, and his entire life smattered across tabloid covers would elicit at least a slight recalibration of priorities for Jason Aldean, or for goodness sakes, at least stimulate a few moments of introspection or something close to the semblance of a deep thought. But instead what we get with Old Boots, New Dirt is a doubling down of Aldean’s errant behavior. The album is the singer breaking free of the repressive sexual bonds of marriage and country music’s rigid moral regime to reclaim his wild 16-year-old post-adolescent oats at the age of 37. On Old Boots, New Dirt, Jason Aldean proclaims the world his oyster, and presents such a flaunting of the human id, even Charlie Sheen would cock an eyebrow and give it a nodding approval.

Bad mouth Jason Aldean’s previous accomplishments all you want, but heretofore his career has been defined by the defiant spirit of interior America’s lost populous—disenfranchised and forgotten in the age of technology as they unflinchingly continue on with their way of life inherited down from generations. It was the rumination on water towers and wondering what if they could talk, the troubling thoughts at watching grain silos slowly run empty and fall into disrepair just like the towns that sit in the shadows of them. It was starring at the dirt underneath your fingernails every evening and the age slowing cracking across your face, while you brood in the same house your grandparents lived in. And yes, it was even driving down dirt roads, swerving like your George Jones, with memory lane up in the headlights, and pondering your place in this fast-changing world and the intimidating passage of time.

Now what do we get from Jason Aldean? A simple enumeration of his sexual conquests one after another, with very little respite.

“I knew the minute that I picked you up, it was gonna be a wild ride,” the very first song “Just Gettin’ Started” starts off. “You kissed me like you couldn’t get enough. Barely made it out of your drive.”

The second song “Show You Off” unfolds just about as you would expect it to. “I just want to show you off. Drive them all crazy, watch all the boys hate me. This ain’t so wrong, come on.” This is what passes for Aldean being “sweet.” This leads into the lead single from the album, the already much maligned and ultra-sexualized “Burnin’ It Down,” …and on and on from there.

And all of this is punctuated with these softcore-style bubbly, smooth jazz R&B electronic sex beats that are the sonic foundation for this album. Jason Aldean has apparently morphed into the country music equivalent of the classic Saturday night Cinemax lineup—showing just enough skin to get you somewhat steamy-feeling, but not conveying enough of either truly revealing material or depth of story to leave you either satisfied or fulfilled. It’s all froth.

Old Boots, New Dirt sees Jason Aldean doing what he did with “Dirt Road Anthem,” which went on to become a landmark moment for rap in country music. Where artists like Jerrod Niemann and Sam Hunt tried to push country music aggressively towards an EDM era, Aldean and his production team understood that to truly take the idea mainstream, you have to smooth off the edges and homogenize it so when you serve it up en masse to the public, they don’t gag as it is getting shoved down their throat. That was at the heart of the success of “Dirt Road Anthem,” and that is what’s at play here. Country rap had already been around for years, but Aldean figured out how to make it palatable for white America’s corporate country consumer. “Burnin’ It Down” (which has been widely successful) and Old Boots, New Dirt do this for country’s new EDM/R&B era.

This all begs the question of what mainstream country music is going to do next since it’s burning through genre bending ideas at about one genre per year. Before we know it, someone will be figuring out how to work polka into pop country (and god knows it would probably be an improvement). But for now, EDM/R&B country is likely to be very financially lucrative for Aldean and others.

There are a couple of moments where Jason tries to evidence some vulnerability and depth on this album. “Tryin’ To Love Me” seems to talk about reflecting back on relationship fights and understanding that the conflict was really coming from love and not spite, and could be taken in the context of Aldean’s recent marital troubles as something true to his personal experiences. But of course this is immediately followed up with “Sweet Little Somethin'” that makes the sentiment behind Maddie & Tae’s “Girl In A Country Song” feel so very timely, and songs like “Laid Back” and “Tonight Looks Good On You” are every bit as awful as their titles imply.

The second half of the album is a little better though, and ends with the best song, “Two Night Town,” which is so classic and well-written, it’s a shame someone like Aldean had to cut it and bury it as a final track. But it is too little too late for this epilogue to Aldean’s era of enumerating the simple virtues of the Heartland ideal and the everyday injustices perpetuated against it through the march of time. Old Boots, New Dirt is Jason Aldean’s Benedict Arnold moment. It is the moment the corn farmer’s son comes home wearing a flat-brimmed baseball cap and listening to Wiz Khalifa. It’s inevitable, but still somehow a shame—not because Wiz Khalifa is evil necessarily, but because it symbolizes the end of an era. Once upon a time, this was something that made for good Jason Aldean songs.