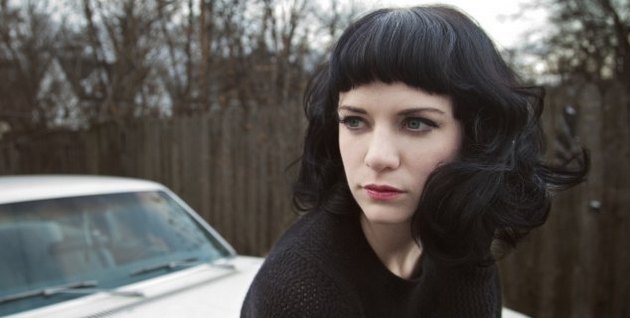 What do the little girls do that grow up as distant strangers to their own time? Like homesick aliens they gather around artifacts of the past to attempt to cling to something familiar; mementos of a world gone by from which to draw some sanity to face the mad, mad modern world they’re immersed in. Greenville, South Carolina native Nikki Lane is one of these such refugees who made her way to Nashville, TN to try and find some kindred folks who felt more familiar living in the past. She took to foraging for vintage clothing artifacts throughout the city—castoffs from a world modernizing to fast for its own good—and assembling them in a little stall in a vintage store in East Nashville she calls High Class Hillbilly. It was there that by happenstance she bumped into a gentleman by the name of Dan Auerbach—famous for many things, but mostly as one half of the rock duo The Black Keys. Next thing you know, a plan is hatched, and an album called All or Nothin’ is being offered to the world for its listening edification.

Nikki Lane’s sound has always been somewhat hard to define. Her first album, 2011’s Walk of Shame was a rocking little number, just as much B-52’s as Buck Owens, and was country in the same way Nancy Sinatra’s “These Boots Are Made For Walking” is, with a dollish, throwback saunter to her style. Nikki traveled around with another female singer for a while, and made quite a bit of noise in the independent music realm, even if nobody really knew exactly what to call it. Ahead of this new release, Rolling Stone decided to strike out on a limb and proclaim her an “Outlaw Country Singer” right there in the title of the damn piece. That seems like a lot to live up to for a little lady from Greenville, and not a little to quantify seeing how that “Outlaw” term has been so ballyhooed and bastardized by anybody and everybody recently. Lane’s self-analysis seemed a little more sedated and on point when she told Paste recently,

Country, it’s presented as real people singing real songs to real people. It’s not. There’s literally like 30 people behind every decision that’s made in that entire industry. The thing I love about this alt country, or Americana, whatever this world is that me and all my buddies have gotten lumped into, it’s a bunch of characters writing songs. Just as Gary Briggs from New West says, we’re ‘living’ our songs. We wrote them about real shit that happened to us. No hypotheticals. 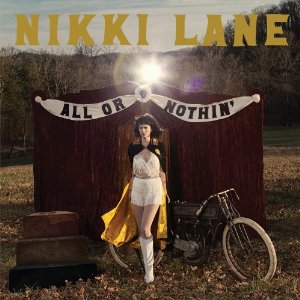 So there you go. That’s the spirit with which you should approach All or Nothin’, because that’s the spirit Nikki Lane approached it with: lay it all on the line and tell some true stories. And getting the truth out of Nikki Lane isn’t something that needs to be coaxed. Whether it’s the surprising, if not shocking honesty of sinful behavior coming from a female voice evidenced in the songs “Right Time” and “Sleep With A Stranger”, or the vulnerability presented in “Good Man” or “Out Of My Mind”, you don’t have to squint to see that these songs are the truth through Nikki Lane’s eyes.

Nikki and Dan Auerbach made the decision to go the “all or nothin'” route with recording this album using vintage gear, and this imbibes All or Nothin’ with that classic, far away, and in places, fuzzy feel. More and more we’re seeing this album-wide technique pop up, especially from big name producers like Auerbach, T Bone Burnett, and Jack White, but it begs the question of whether a more balanced approach—one that finds the sweet spot of striking a warm, vintage feel, but one that doesn’t carry such a filmy layer that’s placed between the music and the listener—would be a better fit. On All or Nothin’, both that vintage feel, and that filmy layer are certainly present, the latter more prevalent in some places than others, like the last song “Want My Heart Back” where Nikki’s voice is just so hard to hear the approach arguably hurts more than helps.

Nikki Lane’s songwriting is where the strength of her music lies. She’s flattered by the gift of a grand perspective in how to tell stories about human struggles in an engaging way, and match them up with melodies that are appropriate, rich, and addictive. Add on top of that country elements like steel guitar, along with some classic pop elements like organ, and you have a blend of influences brought to what at the heart are mostly rock & roll songs. Though Lane will veer off that path in places, like the title track, which is very much a Motown soul song the way it is arranged, or “Loves On Fire”, a duet with Dan Auerbach, which is very much a country song, so much so one may say the verse structure is somewhat recycled from the old bluegrass tune “Rocky Top”. 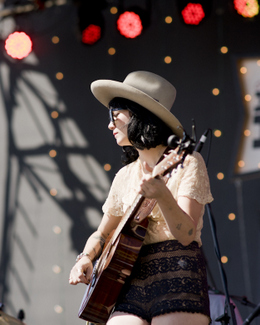 Her voice however is where you’ll either fall in love with Nikki Lane and this album, or find the magic elusive. Her natural Carolina, Southern dollish tone makes up for a somewhat limited range and power, and a subtle smokiness to the edges of her tone makes it that much more alluring. Depending on the setting, Lane’s singing can strike at your empathetic nature, like in the emptiness at the beginning of “You Can’t Talk To Me Like That” where it steals your heart, or in another very country tune “Out Of My Mind” where when the music falls out, her voice feels somewhat naked, even forced.

Most notably about All or Nothin’, Nikki Lane and Dan Auerbach team up to make some very strong independent music “hits” for lack of better terminology. “Right Time” and “I Don’t Care” are definitely those wide-ranging songs that could end up having the world humming after hearing them in a clothing commercial, without selling out their independent, authentic spirit.

Nikki Lane isn’t like many of the young, confident, defiant women of the female roots world. You get the sense she’s more of a beautiful train wreck—seesawing from one debilitating set of emotions to another, but always doing her best to translate and capture those emotions in songs to share with the rest of the world in a way that makes us both sympathize and share in those experiences, embellishing the rich textures of being alive.

Purchase All Or Nothin’ on Vinyl