Trigger Down with Pop Country 57 Comments 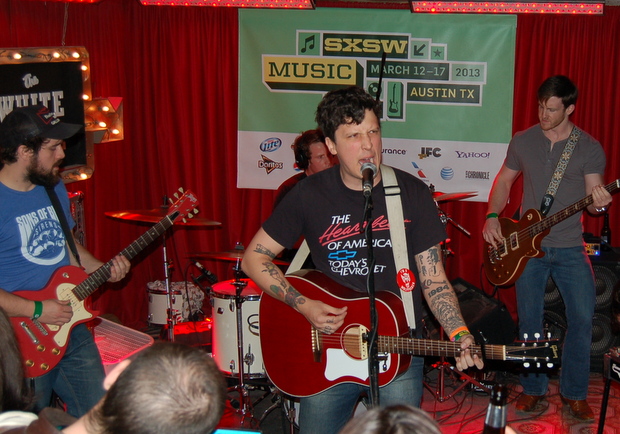 Raleigh, North Carolina-based country rock band American Aquarium, and specifically their frontman, singer, and principal songwriter BJ Barham have been known to twist off about the state of country music upon occasion, both online and on stage. Such was the case on Tuesday (10-28) when the band reminisced about the time one of today’s biggest pop country acts actually opened for them during their 8-year run of playing some 300 club shows a year.

“Three years ago, to the day, Florida Georgia Line opened up for us in Jacksonville, FL with their same brand of bro country that is all over the radio today,” the band posted on their Facebook page. “They now have millions of fans, tons of money and all the cut off bedazzled denim vests anyone could ask for. At least we still have our self respect. Here’s to the working bands out there that never settle. Good on ya.”

Though you would think that most of the fans of American Aquarium would carry similar sentiments about Bro-Country as they do, apparently multiple people took exception, which stimulated American Aquarium to double down on their ideas of what is country and what isn’t, and the right way to make it to the top.

1) I am surprised you are into what we do if you are taking up for this garbage on the radio, but to each his/her own.
2)You are right, I AM jealous of their success. Every band wants to be big. Every band wants to make a living. Every band wants to live the dream. But I want my fame to come from earning people’s respect, not it being handed to me. I want to bust my ass every single day and know that I earned it. I want to play music with my best friends, not some band that my label put together for me. I want to write my own songs. I want to sing my own songs. I want to know that 6 guys stood in a room with microphones and performed every single note you hear, together…as a band. A real band. But jealousy is not the only emotion. I’m also…

-Sad that this is what “country” music has been reduced to. One of the greatest American art forms has been reduced to garbage. No attention to detail. No honesty. No soul.
-Angry that when I tell people that I play country music and this is the first thing that comes to their mind. Angry that America has accepted this. Angry that these “songwriters” do it for the dollar, instead of the integrity.
-Afraid that its only going to get worse. If fans of country music keep letting the powers that be lower your standards, IT WILL become more and more laughable. As long as they know that you will buy it, they will keep dumbing you down. Scares the shit out of me.

But its not all negativity. I’m also…

-Happy that folks like Jason Isbell, John Moreland, Josh Ritter, Patterson Hood, Ben Nichols, Cory Branan, Sturgill Simpson, Evan Felker, Justin Townes Earle, Joe Pug, and many, many more folks are keeping a real, sacred tradition alive. Writing, playing and singing good songs that matter. That will stand the test of time. That will not go in and out of style, but will always fit, because I truly believe that is what honest music does. It transcends time, trends and everything else.

…and last but not least, I am excited that I get to be a part of the solution, and not the problem.

American Aquarium boasts a wide array of influences, and similarly have pulled from various sectors of the music world to form their loyal fan base, including country, Americana, and Southern rock. They’re also considered honorary members of the Texas country music scene. Jason Isbell produced their last record, the critically-acclaimed Burn.Flicker.Die.

And apparently Florida Georgia Line is not the only Bro-Country outfit that opened for the band and went on to big fame. Former Survivor contestant, “Cruise” co-writer, and rising Bro-Country star Chase Rice also once kept the stage warm for them as can be heard in the following clip of BJ Barham from an American Aquarium show.

Here’s another story from Jacksonville, FL: