Austin City Limits, the 40-year-old Texas music and public television institution, has announced the formation of a Hall of Fame in conjunction with their 40th Anniversary, with an inaugural induction ceremony to be held on April 26th at the shows original home, KLRU’s legendary Studio 6A on the University of Texas campus. 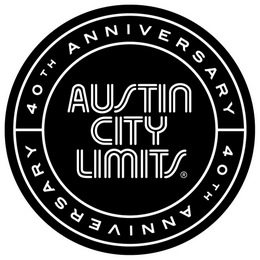 Performers at the initiate April 26th inauguration will include Doyle Bramhall II, Mike Farris, Buddy Guy, Emmylou Harris, Lyle Lovett, Lukas Nelson, Robert Randolph and Kenny Wayne Shepherd. Former University of Texas football coach Mack Brown will also participate in the ceremony, as well as other guests to be announced later. April 26th will also be when the details of the physical Austin City Limits Hall of Fame will be unveiled.

“There are other Halls of Fame, but none quite like this,” Austin City Limits Executive Producer Terry Lickona says. “Austin City Limits has become a unique American institution, in both the worlds of popular music and television. It has such a rich history and legacy that we decided it was time to celebrate and honor the artists and individuals who made it what it is today.”

Each inaugural inductee has a special tie to the Peabody Award-winning music showcase. Willie Nelson played on the very first pilot episode of the series on October 14th, 1974. The show was set up to be the video companion to Jan Reed’s marquee book on the Texas music scene, The Improbable Rise of Redneck Rock, to chronicle the unique music phenomenon transpiring in Texas at the time. A bronze statue of Willie sits outside the entrance of The Moody Theater where Austin City Limits is currently taped.

Stevie Ray Vaughan is arguably the show’s most memorable performer, and a stalwart of the Austin, TX music scene. His shows in 1984 and 1990 are called by ACL, “the most iconic performances in ACL history.” The members of his backing band Double Trouble are also being recognized: Chris Layton, Tommy Shannon and Reese Wynans.

In 1974 when PBS asked member stations to help produce original programming, the program director of Austin PBS affiliate (at the time called KLRN) Bill Arhos decided to prototype a program to feature the world-class music scene brewing in the city. After the successful pilot with Willie Nelson, Austin City Limits was green lighted, and the rest is history.

Though Darrell Royal on the surface may seem like a strange pick for the Austin City Limits Hall of Fame, Royal was a big music lover and supporter of the Austin music scene, and was a friend to many of the artists, convincing performers like George Jones and Merle Haggard to perform on the show. He also inspired the show’s “songwriter specials” from the guitar pulls he used to host at his house.