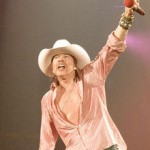 The day after Vince Gill surprised Keith Urban with an invitation to join the Grand Ole Opry at his “All For The Hall” benefit concert for the Country Music Hall of Fame, apparently Vince handed out another surprise invitation, this one to none other than the frontman and sole remaining founding member of Guns & Roses, Axl Rose.

Vince Gill, the emissary for handing out induction invitations for the landmark country music institution, apparently surprised Axl at his Los Angeles residence this afternoon as ginger-headed rocker was hanging kilts out on a clothesline in his backyard. Vince reportedly arrived less than an hour after Axl submitted a letter to the Los Angeles Times refusing to be inducted into the Rock N’ Roll Hall of Fame in a ceremony this Saturday, and Axl became irate with the country star. 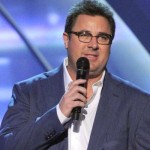 “Mr. Rose apparently accused Vince Gill of quote: ‘Dancing with Mr. Brownstone’ if he thought he would ever join the Opry, and that they should reinstate Hank Williams before anyone else,” says Sgt. Garero of the Los Angeles Police Department. “Mr. Rose then allegedly smashed Mr. Gill’s signature spectacles that he values at $700.”

Sgt. Garero says officers were sent to the property, and that the investigation was ongoing.

When the Grand Ole Opry was approached to explain why they would want to make Axl Rose a member, Opry spokesperson Meredith Frankenfurter explained:

It makes perfect sense when you think about it. Axl Rose and Guns & Roses have way more songs that resemble country music than anything our last two inductees of Rascal Flatts or Keith Urban do. Go back and listen to GNR songs like “Yesterdays” and “Patience”. Even in their harder rock songs like “Paradise City” if you listen to the introduction and the backbone of the song, it’s way more country than Keith Urban. You could make the case that Axl Rose is more country than most of what you hear on country radio today.

Frankenfurter went on to explain that the honor also was meant to commemorate Axl’s and Guns & Roses’ influence on what she called the Opry’s current “hair highlights” class of Urban & Rascal Flatts, as well as on the genre itself.

Look, when you get right down to it, mainstream country music these days from acts like Rascal Flatts and Keith Urban is really nothing more than 80’s arena rock. What better way to pay tribute to Axl Rose for his contributions to modern country than an Opry induction.

Interviewed at LAX waiting for a flight back to Nashville, Vince Gill said he took Axl’s aggression as a “definite NO” to the Opry’s invitation.

Vince Gill’s optometrist could not be reached for comment.