Iconic American songwriter Bob Dylan will be celebrating his 75th birthday on May 24th, and country and roots artist, including many songwriters who cite Dylan as a primary influence on their music, will be coming together to pay tribute to the man in numerous events across the country. 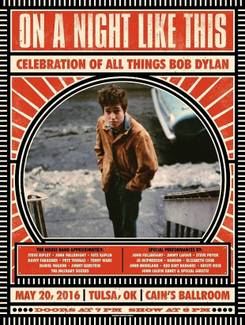 On Friday, May 20th, at the historic Cain’s Ballroom in Tulsa, OK, some of the state’s most noted songwriter will be lending their voice for a concert called “On A Night Like This.” John Moreland, John Fullbright, J.D. McPherson, Elizabeth Cook, Jimmy LaFave, and other artists will performing the songs of Dylan backed by an all-star house band.

The Cain’s Ballroom shindig is being produced by legendary Oklahoma musician Steve Ripley. “I’ve been fortunate to have worked with a lot of great people in the music business … but, for me, all of that pales in comparison to having played guitar with Bob,” Ripley says. “The show at Cain’s will be an evening of celebrating Bob’s music. We’ll be there to serve those songs. I can’t imagine any other thing that would have pulled me ‘out of retirement’ from down on the farm.”

The event in Tulsa holds special importance after The University of Tulsa acquired an archive of 6,000 Bob Dylan artifacts through the George Kaiser Family Foundation recently. The archive includes film, video, photography, artwork, manuscripts, memorabilia, and other items.

The event begins at 7:00 p.m. on May 24th, and tickets can be purchased at cainsballroom.com. 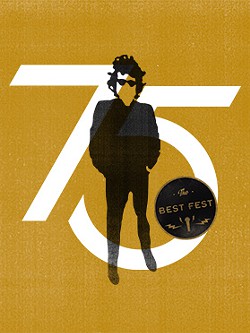 Not to be outdone, Nashville is throwing its own shindig at another historic venue—the Ryman Auditorium. On May 23rd and 24th, artists such as Emmylou Harris, Jason Isbell, Kacey Musgraves, Holly Williams, Nikki Lane, John Paul White, and Langhorne Slim, will come together to celebrate the life and music of Bob Dylan in an event being dubbed “Dylan Fest.”

Tickets will go on sale through Tickerbastard on April 16th, meaning they will sell out immediately.

Other Bob Dylan birthday parties will be observed elsewhere around the country, but it appears the shows in Tulsa and Nashville will set the bar for bringing together talent to celebrate the legendary songwriter.