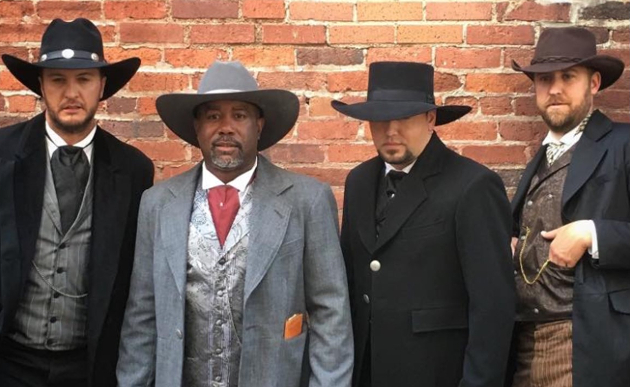 You complain that the songs from today’s top country stars are no good and they should start cutting songs that are halfway decent like the ones your favorite independent and underground artists play … until they attempt to do that very thing, and come across like total dork asses.

Darius Rucker did this one time before when he reprised the ubiquitous song “Wagon Wheel” originally performed by Old Crow Medicine Show and took it all the way to #1 on the charts, then to the Grammy Awards, and on to triple platinum status. Now he digs even deeper to unearth Drivin’ N’ Cryin’s “Straight to Hell” of all things, and since there were four horsemen in the story of the Apocolypse, enlists Luke Bryan, Jason Aldean, and Charles Kelley of Lady Antebellum to join him.

If you’ve never heard of Drivin’ N’ Cryin’ before, or if you have by had no idea they ever did anything resembling country music, don’t feel too bad. Aside from the moderate success for their their 1991 hair metal album Fly Me Courageous and the semi hit of the same name, there’s no real reason you would. But over the last few years, the band has somehow fallen under the always-nebulous definition of “Americana,” in part due to the lead guitar position in the band employing at various times Sadler Vaden of Jason Isbell’s 400 Unit fame, Aaron Lee Tasjan, and Laur Joamets currently, who became a big name playing beside Sturgill Simpson.

Drivin’ N’ Cryin’ is mainly the story of lead man Kevn Kinney who has become a revered character in east Nashville. “Straight to Hell” is a song that was first released in 1989 on the album Mystery Road before the band got big. Over the years the song has become a staple of the band’s live set, and often the show ender, stretching out sometimes 7 to 8 minutes, and evolving into a singalong.

According to Darius Rucker, he’s been wanting to record the song since 1989, and it was a phone call from Charles Kelley that finally convinced him to do so. And now a 30-year-old song from a band with 30K likes on their Facebook page has a song climbing the mainstream country radio charts performed by four of the most popular pop country artists of the era.

There are all manner of reasons to hate everything about this song and collaboration. If you know this song and Drivin’ N’ Cryin’, the last thing you want to see is Jason Aldean and Luke Bryan braying along to it. Their whole Highwaymen-looking shtick is just about unbearable to behold. And maybe you even have some moral objections about the premise of accepting your fate of eternal damnation with such beer stein-swinging zeal that’s behind this song.

All of these things are fair points. In these polarized musical times, lightning rod personalities like Luke Bryan can create non starters for the enjoyment of anything, even songs that are better than “Straight to Hell.” But taking all predispositions and placing them on a shelf, this version of “Straight top Hell” is harmless at worst. It’s a country song, with a country beat and predominant fiddle parts.

Darius Rucker struck gold with “Wagon Wheel,” and he’s heading down that same mineshaft with another drunk singalong. I have no idea why the song was overloaded with face talent. It frankly hurts its chances for anything but those pre-telecast “Vocal Collaboration of the Year” trophies the industry gives out and nobody pays attention to anyway. So many names makes the song feel busy, and distracts from the vibe it’s trying to convey.

But this is fairly mindless and fun frap, even if the original Drivin’ N’ Cryin composition had a deeper meaning than it’s given credit for. This rendition is also further evidence that Music Row at the moment is suffering from a heroic dearth of ideas. We have Darius & Friends dressing up like the guys from Young Guns, and Florida Georgia Line running around in suspenders and vests, cutting a song that sounds like a rehash of Edward Sharpe and the Magnetic Zero’s. Somewhere out in the suburbs, some jarheads are popping their tailgates down and sucking on corporate beer, wondering where all the songs about sitting on a tailgates and sucking on corporate beer have gone.

Yes, this would have been much cooler if Kevn Kinney had paired up with Jason Isbell, Sturgill Simpson, and Cody Jinks to do something like this. But here we are, and this is a hell of a lot better than most of what’s on country radio. If not else, at least Kevn Kinney will get paid.

So you know, whatever. Let these guys play dress up. The whole thing is incredibly weird. But at least it’s not as bad as it could have been I guess. To be honest, I have no clue what to make of any of this.