Despite Efforts to the Contrary, The CMA’s Message of Unity Perseveres 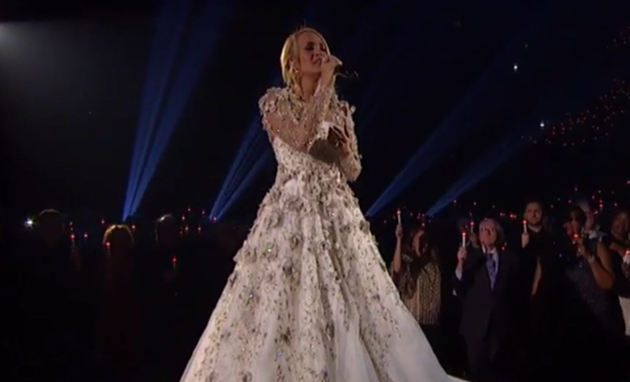 The 2017 CMA Awards could have been a disaster, and for a host of reasons. It was obvious heading into the presentation that forces from outside the genre, fueled by political fervor and fanned by bias media, were hellbent on attempting to make the presentation a political spectacle. The CMA exacerbated the issue by attempting to request of the media to avoid political topics, which only made the focus on politics even more imperative for certain media operatives. On the day of the CMAs, Rolling Stone, The Nashville Scene, the LA Times, and others ran think pieces imploring country’s stars to speak out against guns and broach other social issues from the CMA podium to put a charge in the plan to politicize the event under the idea that as a bastion for Trump support, dissent from country music would be a way to undermine Trump’s political base.

And then the presentation started with a highly-touted opening number being sold as a “touching moment” that ultimately was nothing more than an awkward, out-of-place rendition of Hootie & The Blowfish’s “Hold My Hand.” Was a 24-year-old pop song really how the CMAs were going to show respect to the 57 country fans killed in Las Vegas the month previous? Brad Paisley and Carrie Underwood’s monologue was well-meaning by trying to make light of the the political tension in the room and even the CMA’s own foolish media request. But aside for a few funny moments, it was more awkward than unguarding, giving attention to the pins and needles everyone rests upon in this divisive political climate, and inadvertently pointing out the precarious political anvil dangling over country music that seems to be waiting to fall and cause country’s cultural demise like we’ve seen with the NFL and other institutions.

Then sound issues saddled some of the early performances, and then add to the mix the mother of all wild cards when Sturgill Simpson showed up outside of Nashville’s Bridgestone Arena to do a busking routine on Facebook Live, complete with political and anti-Trump rhetoric, and promises to answer any questions posed to him with all proceeds of the tip jar going to the ACLU. With the incensed and ultra-focused mindset of today’s political media, Sturgill immediately became a significant side show, with some outlets stopping down or interrupting their CMA coverage to make Sturgill Simpson the main attraction until his phone battery tanked 45 minutes into the presentation.

But meanwhile inside the Bridgestone Arena, the upper lip stiffened. Country music was able to do what few other cultural institutions in America have been able to do since Election Day and well before, which is show solidarity and unity in the face of dissent and adversity, and not just for themselves, but for the people who are looking for a respite from political turmoil and emotional retention that is plaguing seemingly all sectors of American life.

Regardless of what any one fan thinks about the winners at the 2017 CMA Awards, the acceptance speeches were filled with messages of unity and inclusiveness. Many of the presenters, including comedian Tyler Perry, carried with them to the podium messages of coming together regardless of cultural or political differences. The term “family” was brought up multiple times. And Carrie Underwood, in the middle of the presentation, and taking everyone completely off guard, delivered that promised “touching moment” honoring the victims of the Las Vegas shooting, as well as country music’s fallen greats over the last year, in a performance that will be remembered right up there as one of the greatest moments in the CMA’s 51-year history.

Of course there were flubs and failed performances throughout the night, recipients of awards to second guess, too few women winning awards, and the overall off-putting pageantry of any awards show. But it was pretty remarkable that despite the potential for distraction and turmoil, the CMAs and their purposeful message of unity won the night.

Yet instead of being taken a good example for the rest of the country, multiple media outlets took the solidarity country music evidenced at the 2017 CMA Awards as disappointing, inappropriate, and even insulting. The Guardian said Thursday, “By focusing on what they didn’t want to talk about, the CMAs ended up with a show that lacked any discernible identity.”

But the CMA Awards’ identity was patently clear, and marked by the word on the front of host Brad Paisley’s shirt, “Unity.”

The LA Times said the CMA’s “played it safe at precisely the wrong moment.”

The Washington Post had a similar take, saying country music is “Becoming a soundtrack of a non-existent, apolitical no-place.”

These politically-bias perspectives are based on a frustration, and even anger that country music refuses to get political. And though these outlets are characterizing country music as heading towards irrelevancy if it doesn’t take political stances, viewership for the 2017 CMA Awards was actually up by nearly 2 million viewers from last year’s 50th Anniversary gala, and up from 2015 as well which saw a marquee appearance by Justin Timberlake. It appears that viewers and country fans found the CMA’s unity message favorable as opposed to putting it in a “non-existent no-place” as characterized by The Washington Post.

You have to question the motives, and the moral compass of opinion makers who find a message of unity as an affront to their ideals. Despite these outlets’ rhetoric of open-minded inclusiveness, at the heart of these opinions is a fundamental disrespect for country fans and artists as being uneducated, and unaware of the responsibility they have to take care of each other. These media outlets are taking country music’s understanding of its place in society as an entertainment forum as inaction, uncaring, or ignorance, while country music sees its obligation as giving people a place they can get away from divisiveness.

Country music isn’t unwilling to broach the political, it’s just unwilling to do it as dictated by intellectuals who would use country music’s stars as unwitting pawns to do their political bidding, preaching to their fans bases about things they don’t believe, to an audience that doesn’t want to hear it. It is the seat of arrogance, conceit, and wanton elitism to believe that country stars will take up political subjects in complete opposition to their own principles and views just because someone wants them to. Ultimately this may not be about spreading a political message, but a divide and conquer scheme similar to what we’re seeing with the NFL, and from Russian intervention in American social media. If institutions like country music will not acquiesce to the political will of opinion writers and intellectuals, then they will not be allowed to rest in comfort, and must be roiled with political divisiveness and disruption until country fans are just as unhappy as those stricken with systemic political distemper.

These media opinion makers will also say it is unfair that country stars and fans can ignore political subjects, while marginalized people are not extended that luxury. But nobody is ignoring political subjects, they just see the value in keeping politics a place apart from entertainment. And by asserting country stars and fans are too ignorant or closed-minded to know what’s good for themselves, they are being institutionally marginalized in their own right.

The day after the 2017 CMA Awards, Tim McGraw and Faith Hill spoke on record saying they were for reasonable gun laws. A Kacey Musgraves song called “Follow Your Arrow” about inclusiveness was the 2014 CMA Song of the Year. It was co-written by two openly gay country music songwriters, Brandy Clark and Shane McAnally. And Shane McAnally is arguably the most powerful man in all of country music at the moment as the songwriter and producer du jour behind most of mainstream country’s biggest hits and hottest artists.

Of course country music could use some more diversity, and some new ideas to loosen the collar. Of course there are racists and bigots within the ranks of country fans. Of course country artists and fans should be able to speak free about their political opinions without the fear of the type of retribution we saw with The Dixie Chicks. But the idea that country music needs to jump head first into the contentious political waters as either an industry or an art form is asking for cultural suicide. This is not about making country music a political safe space away from the issues facing life in America today, it’s about respecting the integrity and charge of a musical art form from the overwhelming, and often debilitating infection of politicization.

Music has a unique ability to bridge the gap between people of different mindsets, and unite them through the shared human experience. That is what was on display when Carrie Underwood took the CMA stage on Wednesday night and paid tribute to the 57 victims of gun violence in Las Vegas. Politicizing country music would would mean the marginalization of its effectiveness to unite, if not the marginalization of the art form altogether. Because just like the NFL, if country music becomes a forum for protest, it wouldn’t result in any measurable cultural change. It would just result in people tuning out.