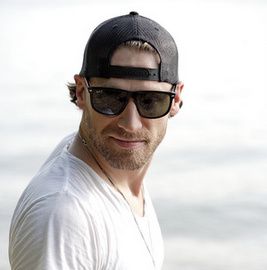 “I’ve even started disliking these songs that I have written about a girl and a truck and a perfect night. I don’t dislike the ones I have put out. I just dislike the amount of songs I put out about that sort of subject matter.”

This was stunning (and slightly contradictory) admonition that Bro-Country artist Chase Rice made to the Sun Times back in October. Most infamous for being one of the co-writers on Florida Georgia Line’s mega-hit “Cruise,” Chase went on to become one of the defining artists of the Bro-Country movement when his album Ignite The Night was released in 2014. Rice’s single “Ready Set Roll” became the poster boy for the misogynistic bent of Bro-Country, commanding his object of desire to “get your little fine ass on the step, shimmy up inside.”  But ahead of his new upcoming album he’s begun to sing a completely different tune.

“It’s exciting for me at this point of my life to really know who I am,” Rice says. “I put out 19 songs on my last album, and I figured out through that what I love and what I hate. It will be all about depth in this next record. If there is any way to find out who someone truly is, it’s through hearing about the deepest parts of their lives. That’s what these new songs will have in them.”

Chase was sure saying the right things, as are a lot of the Bro-Country acts who are now acknowledging the flight of interest in the bastardized style of country music. But words are cheap, and actions speak louder. And it didn’t take long for Chase to break his promise that his next album would be “all” about depth.

Just as Chase Rice was the lesser-known, but equally important player helping to usher in Bro-Country, he also part of a growing chorus of country stars pretty much openly admit their lead single sucks. But that’s okay because their albums will be better. Right now, mainstream country music is almost solely predicated on the life of an album’s lead single. It is the alpha and omega barometer of the industry. Everybody knows that lead singles are abominations of the format. But they are absolutely necessary to secure the radio play necessary to give an artist and an album the boost it needs to get from the studio to the store. If the lead single fails, so does the album, and potentially an artist’s entire career.

You can at least give Chase Rice credit for his honesty, because even though he does his best to beat around the bush in a painstakingly-long chicken-scratched letter he released to his fans on Friday (2/5) he basically admits that his new single “Whisper” is bad, cliche, and lacks substance or story. But he promises the album will be much better. He even plays up the whole card about how the album concept and substance in music still matters, as if these words will make up for what “Whisper” symbolizes.

Despite Chase’s praising of the album concept, most of his spasmodic fans aren’t going to purchase a hard copy of his new album anyway. Most would need a Ritalin pill to make it through this letter.

What the Chase Rice letter tries to establish is that it’s okay if your singles suck, as long as you admit that to your fans. It’s a strange game of open-faced poker where your admitting you’re poisoning the masses, but believe apologizing for it ahead of time somehow removes all blame, when in truth all it does is admit culpability.

Chase’s letter is marketing. But what it does speak to is how the criticism of country’s direction is being heard and acknowledged in every sector of country music, and can’t just be ignored. The criticism of songs like “Whisper” is a force in the marketplace itself, so much so that it must be calculated into a single release. “Whisper” even has Chase Rice fans saying, “I miss the old Chase Rice.” 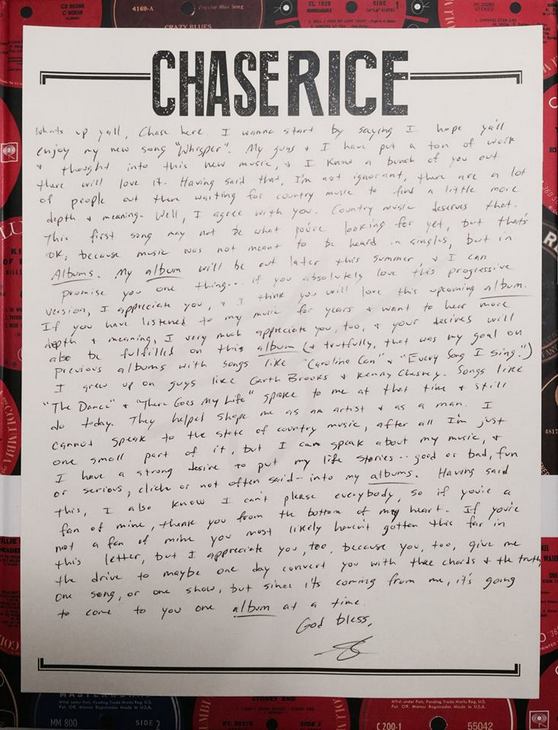 What’s up y’all. Chase here. I wanna start by saying I hope y’all enjoy my new song “Whisper”. My guys and I have put a ton of work and thought into this new music, and I know a bunch of you out there will love it. Having said that, I’m not ignorant, there are a lot of people out there waiting for country music to find a little more depth and meaning. Well, I agree with you. Country music deserves that. This first song may not be what you’re looking for yet, but that’s ok, because music was not meant to be heard in singles, but in Albums. My album will be out later this summer, and I can promise you one thing .. if you absolutely love this progressive version, I appreciate you, and I think you will love this upcoming album.

If you have listened to my music for years and want to hear more depth and meaning, I very much appreciate you, too, and your desires will also be fulfilled on this album (and truthfully that was my goal on previous albums with songs like “Carolina Can” and “Every Song I Sing.”)

I grew up on guys like Garth Brooks and Kenny Chesney. Songs like “The Dance” and “There Goes My Life” spoke to me at that time and still do today. They helped shape me as an artist and as a man. I cannot speak to the state of country music, after all I’m just one small part of it. But I can speak about my music, and I have a strong desire to put my life in stories .. good or bad, fun or serious, cliche or not often said – into my albums.

Having said this, I know I can’t please everybody, so if you’re a fan of mine, thank you from the bottom of my heart. If you’re not a fan of mine you most likely haven’t gotten this far in this letter, but I appreciate you, too, because you, too, give me the drive to maybe one day convert you with three chords and the truth one song, or one show, but since it’s coming from me, it’s going to come to you one album at a time.

The song “Whisper” will be dealt with specifically in due course.