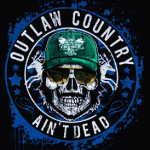 Eric Church has been stirring the pot quite a bit lately, calling out Blake Shelton & Miranda Lambert amongst others in a recent Rolling Stone article for their reality show past, before issuing an apology that was curiously devoid of an apology to Blake Shelton, the main protagonist of Church’s criticisms.

Now as Church continues to make the media rounds in support of his current tour with Brantley Gilbert, he stopped to talk to American Songwriter where the topic of being an “Outlaw” came up. Church is regularly lumped with the crop of “new Outlaws” that can include people as varying as Justin More and Gretchen Wilson, to Jamey Johnson.

Justin Moore famously proclaimed himself an “Outlaw” on his album Outlaws Like Me, to the chagrin of many. But Eric has been smart heretofore of straddling the Outlaw line, allowing others to use the term when referring to him, but stopping short of using the term on himself to be insulated from any backlash. For example, at the CMA awards in November, Brad Paisley introduced Eric as “country’s latest Outlaw” before his performance.

These award shows are so choreographed and exquisitely planned, it is ridiculous to think that Church’s management was not at least briefed on how he would be introduced. Church has certainly never refuted that term when it has been used to describe him. Until now:

American Songwriter: People have been calling you an outlaw. Is that an image you’ve tried to create for yourself?

Eric Church: Oh god. No! Not at all. I think we get thrown into that category because of our career path. For a long time, it wasn’t cool to play the kind of music we did. It wasn’t cool to talk about what we talked about. We were pariahs, and when we got fired from the Rascal Flatts tour, we were troublemakers. I think that’s where the outlaw name comes from, but I prefer to think there’s already been an outlaw movement, and I think we can leave it at that. I’m not into branding what we do, because that just sensationalizes things, when it should be about the music.

Yet as one Saving Country Music reader named Chris easily sniffed out, a quick check of Eric Church’s website finds a whole page dedicated to “Outlaw” branding, with “a brand new “Outlaw T-Shirt” now available for sale in the online store, which features Eric’s signature Skull logo. Be one of the first to own it!” 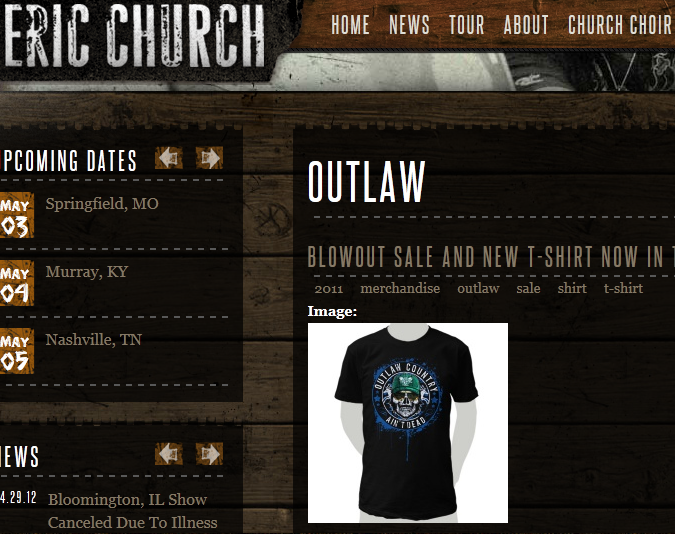 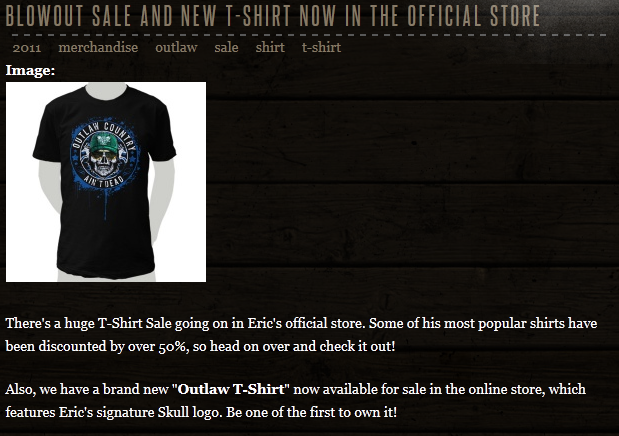 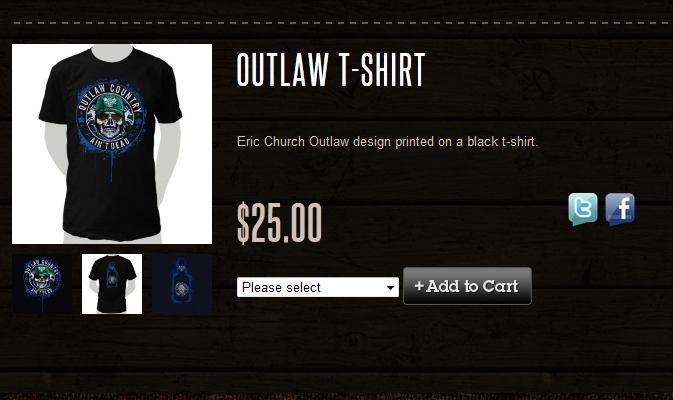 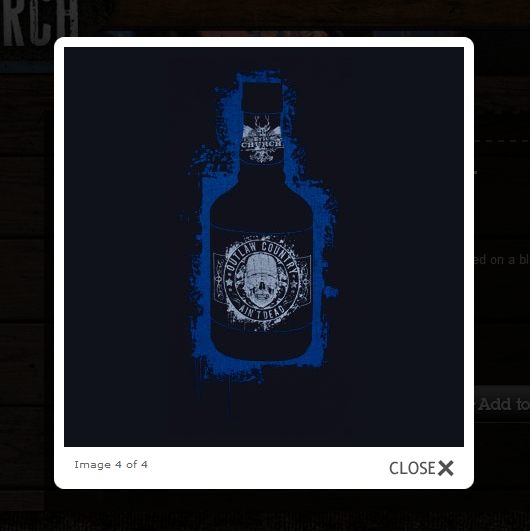 Ouch. Sucks to miss that one. And these products were added in July 2011, so there no back pedal of saying there was a breakdown in communication with his merch store.

But in classic Eric Church fashion, he keeps open the idea of plausible deniability by not directly calling himself an “Outlaw”. Or as I’ve said before Eric Church Wants It Both Ways.

Meanwhile the beautiful “Outlaw” term and how it pertains to country music continues to be besmirched where even the most loyal “Outlaw” fans want to take the term behind the barn and put it out of its misery like an old dog with cataracts and arthritis in its legs and a tumor the size of a tennis ball clogging its airway.

It’s a shame, because when it comes to country radio, there is much worse than Eric Church. But his continuing missteps and insistence on image, Outlaw or otherwise, continues to make him very hard to like.